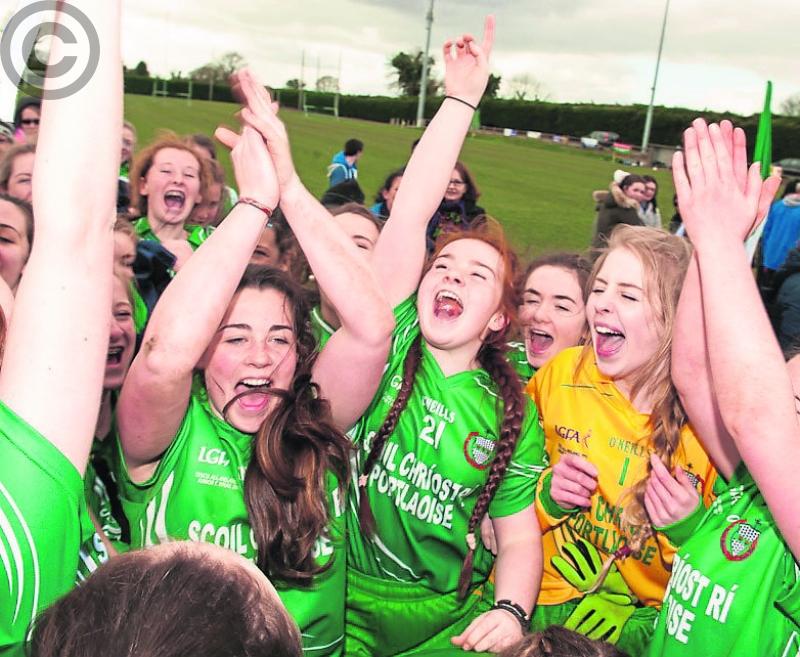 Scoil Chríost Rí are operating on a level of sporting achievement few schools can compare with. Pic: Denis Byrne

Our 'On The Road' travel blog returns this week, as Scoil Chríost Rí from Portlaoise reach ever higher levels of sporting excellence. What the school are doing is nothing short of remarkable.

A funny thing happened as I walked into the Tinryland club grounds on Thursday afternoon. I was there for the Leinster Junior 'A' football final between Scoil Chríost Rí Portlaoise and Loreto Wexford.

Two men were walking in behind me, both there to support Loreto Wexford, and they were discussing their team's chances.

"Have they ever beaten Portlaoise?" asked one.

"Yeah" the other sighed, "but it was years ago."

It probably best sums up the almost complete dominance the school has been enjoying in Ladies Football across the province in recent years. The last week and half has seen them win Leinster 'A' titles at Junior and Senior level.

The school's success isn't limited to football, however. They also won an All-Ireland basketball title last Wednesday, and were beaten, after extra time, in a Leinster U-19 soccer final. They lost the game 1-0, and hit the post four times.

They are on the hunt for an U-17 Leinster title in soccer as well, and have also been making strides in camogie. There's even talk of some students trying to get a rugby team started in the school.

There are a number of factors behind their success, one of the key ones being a staff who are prepared to put the time into coaching and improving the teams. They've also been blessed with some outstanding sportswomen coming through the school at the one time, but they have all been expertly coached and guided towards success.

Their performance in Ladies Football in recent years has been remarkable. Starting out in the 'C' grade, they won 'C', 'B' and 'A' titles one year after another. They have won All-Ireland titles at Senior and Junior level, and this year will go for the double in the 'A'. At times, their dominance has been so complete that when attending their games, I've found myself feeling sorry for the opposition.

The easy option is to pin the success of their current teams to a couple of talented players, with Emma Lawlor and Erone Fitzpatrick the two stand-out performers. Both are already playing senior football for Laois Ladies, and have terrorised teams since they set foot in the school.

They are all hungry for success too and clearly take coaching well. On Thursday, with a gale blowing down the field, they could play a direct game in the first half when they had the wind, and switch to a running game in the second when they didn't. Not many teams, of any age in any grade, possess that ability.

Top class teams and players have been churned out at an incredible rate, and as well as the likes of Lawlor and Fitzpatrick, who are already impressing for adult teams, there are other students in the school competing at a very high level.

Maeve Phelan is playing Super League basketball with the Portlaoise Panthers senior ladies team, as well as featuring at underage level with Ireland. Gillian Keenan and Emma Lawlor have played international soccer for Ireland as well.

It is a remarkable rise from the school, but in many ways it isn't a surprise. With Pat Critchley on the staff, sporting success was inevitable. He has been inspiring and moulding another generation of exceptional athletes, along with a host of other teachers like John Scully, Tom Moss and Stephen Goggin, to name a few.

The detractors will point to the amount of school time missed by students who are playing sport, and perhaps they have a point. It is up to the school to ensure that, while students might miss out on class, they don't miss out on an education.

The rewards of sporting success, however, go beyond the presentation of medals. The confidence, friendship, determination and resilience it can imbue in the players is every bit as important for later in life as algebra and the Modh Coinniollach. The students, parents, and wider sporting community in Laois will all benefit from what the school is achieving.