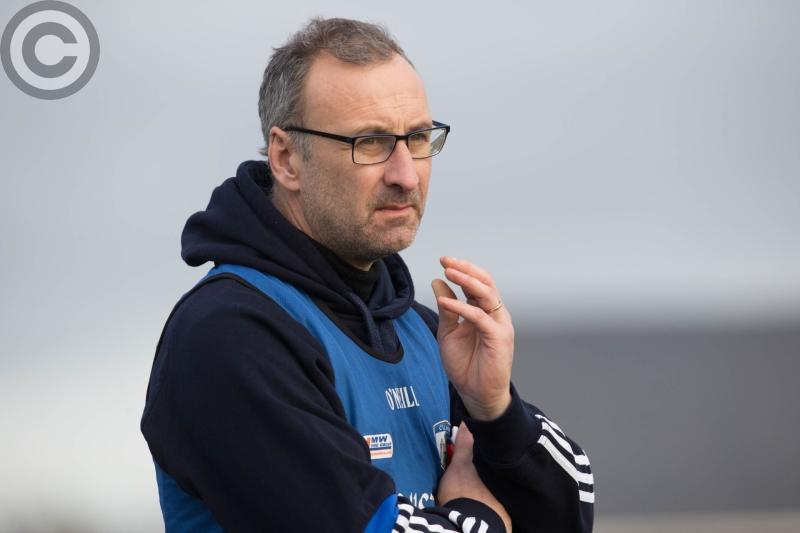 Peter Creedon hailed his players after they hauled themselves back from a five point deficit with ten minutes to go to beat Armagh.

Laois have a remarkable record against the Orchard County, winning eight of their last ten games between the sides, although the latest victory had seemed unlikely when Armagh hit seven points without reply in the second half.

That pushed them five clear and Laois looked in real trouble, but they steeled themselves and worked their way back into the game.

After the twelve point loss to Louth the week before, it was a remarkable turnaround in fortunes for Laois, and Creedon paid tribute to the attitude of players in bouncing back. “When you take a hiding like we did last week, you either dig a hole and jump into it or you just climb out and get going again.

“Sometimes an away trip is good, you get on the bus and you have a bit of time together. I suppose there was no expectations today either, we just went out and played.

“I thought we were very good in the first half and could have racked up a few more scores, but I'm happy, happy with the attitude of the players and performance, two points is a good spot to be in now.”

What made the victory all the more impressive was that it was achieved with a slew of experienced players out of action, with Colm Begley ruled out through injury before the game.

In spite of that inexperience, Laois started really well, and were the better team for most of the first half. “We were probably down six or seven of Laois' better known players, we are throwing in some young lads and I thought they all did very well, and that's going to be good for them going forward.

“We have to build a panel of 24 players that will be ready for championship, and that's what we are hoping to get out of this league campaign. Obviously, today's win is a big bonus and it puts us back in the hunt again.”

Laois turned to some of their older players in the second half, with Padraig McMahon and Ross Munnelly being introduced as Armagh took a stranglehold on the game.

It didn't look good for the visitors at that stage, but for Creedon they key at that stage was to have patience. “Good teams are going to get a run on you at some stage, it was only a matter of hanging in there and making sure we didn't concede a goal at that stage and keep playing. Doesn't it just show you what can happen if you stick at it?

“At the same time, we made a lot of mistakes today, we won't be getting too high about beating Armagh away from home, because Laois seem to have the Indian Sign over Armagh for whatever reason, I think it is the sixth or seventh time in a row (to beat them), so we've just got to knuckle down and get ready for Tipperary in two weeks time.”

Indeed, there was enough here for Laois not to be getting too carried away. Armagh were particularly wasteful, spurning a whole host of goal chances and finishing with 13 wides.

While the home side struggled in front of goal, Creedon felt much of that was down to the efforts of his players. “I would like to say our players were putting Armagh under a bit of pressure, and they were shooting under pressure.

“We scored 2-11 and missed a few ourselves, that would be a good score against any UIster team. There are obviously places we need to improve, when we looked at the video against Louth we weren't as bad as people might think either, it was just some sloppy turnovers gave them chances to counter.

The win should restore some confidence to the younger players in the squad, who may have had it rattled after the Louth game, and Creedon spoke glowingly about those young players afterwards. “The likes of James Kelly, Eoin Buggie, Danny Luttrell, I thought they all managed themselves quite well.

“I thought Danny O'Reilly was excellent when he came on, and we have a few more as well, Brian Daly and Sean Moore are ready to come in as well and when we get the chances we are going to put them in.

“Mix that with the enthusiasm of some of the older players and it should be a nice blend, but we're going to have to be better than that to beat Tipp, and as the season goes on, I'd be hoping that we improve.”

For those Laois fans in attendance, the abiding memory will be the hunger shown in the closing minutes, when they got a sniff of victory and hunted it down. “We went after it, sometimes you have to throw the shackles off and go for it, and that's what we did.” said Creedon afterwards.