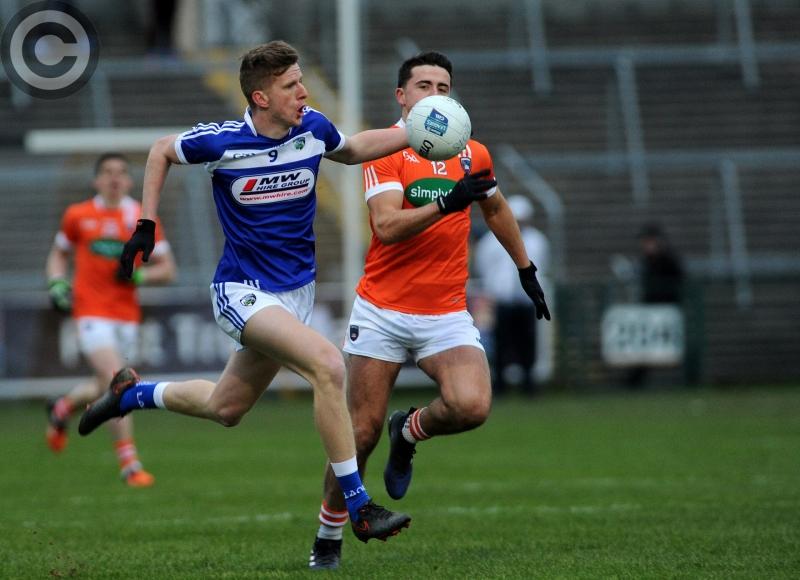 Danny Luttrell on the attack for Laois. Pic: John Merry

'YE MUST BE BORN AGAIN' implored the sign outside Mullaghglass Free Presbyterian Church, just outside Newry. Little did I know at the time, but the Laois footballers would take heed of the suggestion.

Having just come off the M1, it was the kind of statement to rattle you out of the boredom that can set in with motorway driving. It's quite the prospect too, but I can't see myself taking the advice. I mean, who wants to give birth to a 15 stone, 31 year old baby?

About 100 yards up the road, on the right hand side, sits a shed with 'Texas Roadhouse' emblazoned across it, and I start to wonder have I driven into some kind of Armagh tribute to America's Bible Belt. I can't see any Trump posters or pickup trucks anywhere, so maybe it's just a coincidence.

Laois's first away trip of NFL Division 3 had me back on the road this weekend. It was toss up between heading to Kerry for the hurling or Armagh for the football, but with the promise of a report being provided from the hurlers game in Tralee, I headed north.

Unfortunately, I was one of the few who did make the trip, with a distinct scarcity of southern-registered cars on the road to the game. It is a terrible shame to see the apathy towards Laois teams at the moment, something only winning games will probably rectify.

It's a pity, because some of my best memories around Laois games when I was younger are as much about the journey as the matches themselves. I can still remember snaking through Monastervin and Kildare on the way to Croker before the motorway opened, a convoy of Laois cars all gleefully beeping their horns as they passed through enemy territory.

Then there was the minor games in the mid-nineties, when 13 of us packed into the back of my father's short-wheel base 1987 Ford Transit. We had flags over the back windows so no one could see how many of us were in it, scaffolding planks set on paint cans in the back for seats, and smiles permanently etched across our faces. Ferocious games of 'Slaps' passed the time on the way home.

We still laugh about it at home, parking up in Scoil Uí Chonaill and seeing the looks of bemusement on the stewards faces as we streamed out of the back of the van, like a scene from a cartoon.

The Road Safety Authority are probably delighted things like that don't happen any more, but I think it's a shame that what seems like a whole generation will have no memories of going to Laois games. Granted, Laois were winning at the time and it seemed like the whole county migrated to wherever they were playing, but the support has plummeted in recent years.

In the first of these blogs I mentioned that I enjoyed the away games, because something interesting invariably happens when you are on the road, meeting new people and seeing new things.

That sense is multiplied when you cross into Northern Ireland, a place where it feels like everything is screaming at you. Tricolours and Union Jacks litter the roads, churches want you to be reborn, and you get an anti-abortion leaflet left on your car window while you're at the game. To me at least, nobody ever seems particularly at ease.

Apart from one guy, that is. With it being election season in the North, the roads are festooned with the usual posters of po-faced politicians looking for a vote, but one man stood out from the rest. Emmet Crossan's poster urged voters to 'Educate, Regulate, Medicate', which seemed like the kind of thing Dr Dre would come up with, if he was an actual doctor.

I'd imagine Emmet and his pro-cannabis leanings have about as much chance of getting elected as Marty Morrissey has of winning Miss Universe, but at least he offered a break from the austere nature of everything else.

Laois provided another break from it, tearing into Armagh from the start and playing some impressive football on the counter-attack. Sean Ramsbottom's perfect pass to Niall Donoher allowed the Courtwood man to score the first goal, as they raced into the lead. For about fifteen minutes before and after half time though, Laois were poor.

Armagh kicked seven points in a row in the second half to go five in front, and all looked lost. That was until Niall Donoher kicked a point, Laois pressured the kickout, forcing a mistake and setting Donie Kingston through on goal. He was hauled down for a penalty, took it himself, and found the bottom corner. Game on.

The last ten minutes were absolutely frantic. Kevin Meaney had a goal chance brilliantly saved, Armagh kept losing the ball inside their own 45 yard line, and Laois hounded them into one mistake after another.

With normal time up, Laois won a free 45 yards out, in front of the goal, and into a stiff breeze. With an Armagh man down injured, Donie Kingston had to wait for a good two minutes before he could take it. It was a pressure kick in every sense of the word, and he dropped the ball straight over the black spot for a brilliant score.

Darren Strong then intercepted the kick out and hit the winner, Paul Kingston and Aidan Forker were sent off, and Armagh missed a free with the last kick of the game to level it. And breathe.

It was a hell of a comeback from Laois. It was just a pity there was hardly anyone there to see it.