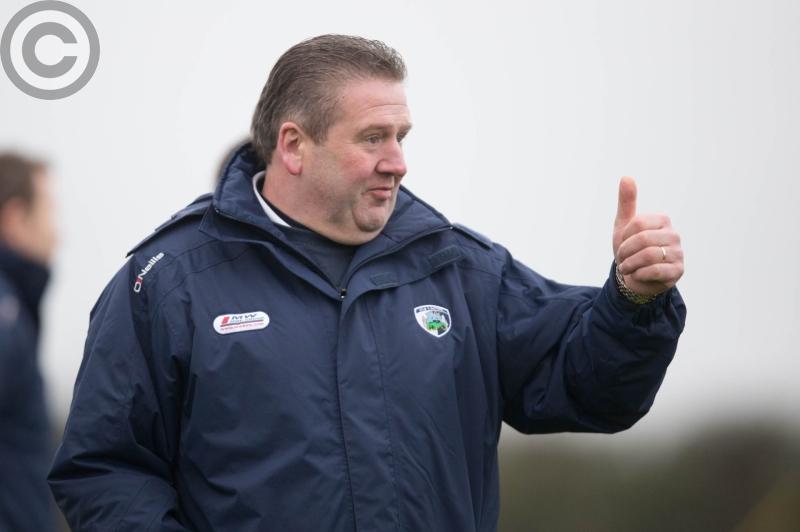 Eamonn Kelly was delighted with the way Laois bounced back from the loss to Kerry. Pic: Alf Harvey/HRPhoto.ie

Laois manger Eamonn Kelly was delighted to register the first league win of his reign on Saturday night, as his young side easily accounted for Offaly.

Kelly's charges were starting to control of proceedings when Offaly were reduced to fourteen men before half time, and a second sending-off just after the restart ended the game as meaningful contest.

Things had started badly for Laois, who were 1-2 to no score down after a little over five minutes, but they quickly steadied the ship, and full deserved the win. Speaking afterwards, the Tipp native paid tribut to his players for fighting back to claim the win. "We knew Offaly were going to come out all guns blazing, they had a difficult week, no more than ourselves, and they got a good start, scored 1-2, but credit to our lads, they fought back and came back level again.

"It was a ding-dong battle then until the man got sent off, I think it would have been a very competitive game other than that."

In truth, Laois were getting on top in the game before Sean Gardiner became the first Offaly man to see red, but even with the visitors at a numerical disadvantage, Kelly was nervous. "I was actually nervous, because you often see with fourteen versus fifteen, it doesn't always go your way.

"The fourteen hurl with a bit of freedom and the fifteen drop off a few percent, but we put up a good score, we wouldn't have liked to concede as much as we did, but I think there is plenty to work on."

Kelly also paid tribute to the performances of some of the young players, with Leigh Bergin continuing to impress at full-back. "We have a very young squad, and we're delighted that these young lads are putting their hands up. Leigh Bergin had been outstanding in the Walsh Cup, and even last week in defeat he had a great game, he commanded his area well tonight.

"Full-back is a difficult position to find, you could turn a corner-forward into a corner-back, but you might not turn a corner-back into a full-back, it's very specialised, and we're delighted that Leigh is going well in there."

Over in the Offaly camp, in spite of the defeat, manager Kevin Ryan felt there were more positives to take from the loss to Laois than there was from the loss against Galway. "There was probably more positives in it than last week, in the sense that when we did go down to thirteen, they were up for the second half anyway with fourteen, but I thought they went up another gear when we went down to thirteen.

"I saw a few things that we hadn't seen up to now, which was encouraging. It's disappointing to see any league aspirations you might have had dropping before your eyes, but at the same time we just had a chat about it there when we came in, and there are an awful lot of positives there, if we can get to that level with fifteen men for seventy minutes, it's very encouraging. As disappointing as it is, it is very encouraging."