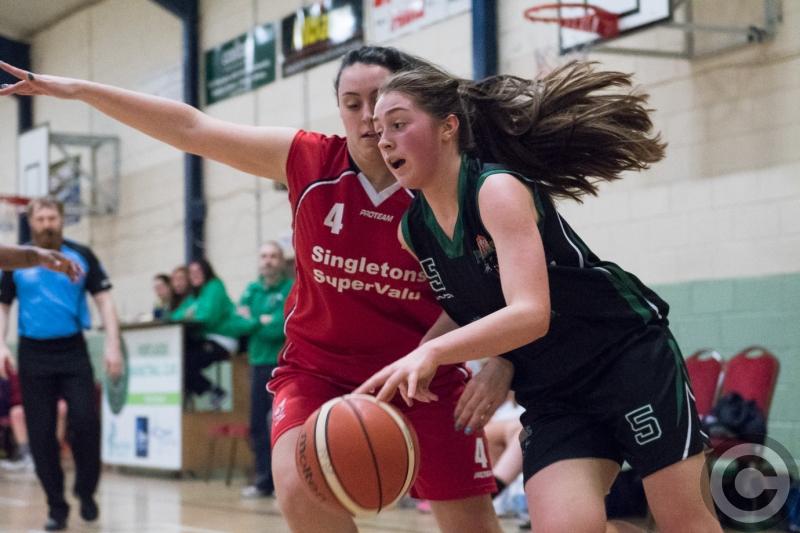 Maeve Phelan in action for Portlaoise Panthers against Brunell at the weekend. Pic: Denis Byrne.

The Portlaoise Panthers looked to come back strong after their tough loss to Liffey Celtics last weekend in order to keep their Super League playoff hopes alive against Singleton Supervalu Brunell in St Mary’s Hall on Saturday night.

In what was their last home game of the season, and for Necole Sterling before she returns home to the States, the girls wanted to secure a win and give the crowd something to celebrate after such a successful home campaign this season.

The first quarter was a tight affair as both teams struggled to convert their opportunities on either end of the court as Brunell left some lay-ups behind while Portlaoise struggled to find range from the outside.

Claire Melia faced a tough battle inside all game against 6"4 Canadian, Kaylee Kilpatrick but she started well netting four of her 13 point tally in the first quarter despite the aggressive defence inside.

Necole Sterling and Catherine O'Sullivan found their range from the outside the arc towards the end of the quarter hitting crucial three pointers to push the home side two points clear at the break. The first quarter set the precedent for the rest of the game, which was going to be a hard fought, dogged affair.

Although struggling in the bottom half of the table, Brunell have grown in confidence as the season has progressed and this was apparent as they moved the ball well on offence, inside and out, exposing holes in the Portlaoise defence. The ever present Kilpatrick inside was a constant threat and looked dangerous throughout.

A quick change to zone defence by the visitors saw them struggle with their defensive boards which saw Maeve Phelan and Sharon Melia take advantage of their strength as they picked up offensive rebounds which allowed for some second chance opportunities for the home side. Deirdre Tomlinson contributed to her teams rally off the bench as she utilised her speed and quick step with an excellent baseline drive as the Panthers pushed out their lead.

Panthers remained on top as Brunell were forced back into man-to-man as Claire Melia assisted her teammates by picking off some perfect backdoor passes. Brunell made one final push before the half time whistle which closed the gap but Portlaoise held out to take a two point lead into the third quarter.

The first few minutes of the third quarter was a bad spell for Portlaoise as they reliquished their lead for the first, and only time, of the game as Kilpatrick dominated inside and picked off O'Leary and Murphy outside who executed excellently.

However following a quick timeout, Portlaoise emerged with added intensity as they pushed the ball on the break which a tiring Brunell struggled to deal with. Sinead Melia did a super job on the defensive end on the lively Amy Waters as she matched her physicality both out and inside.

O’Sullivan and Sterling bucketed two much needed three-pointers each, Melia and Phelan went four-from-four from the free throw line resulting in the home side extending their lead to 13 points. Brunell made a brief come back and closed the gap to six points at the end of the third.

O'Sullivan and Sterling again added to their teams tally at the beginning of the fourth with two consecutive three pointers as the home side took a firm grip on the game. To Brunell's credit, they never gave up and were a thorn in the Portlaoise side at some points throughout the quarter.

Portlaoise maintained composure on offence which was key to this success as O'Sullivan, Melia and Phelan broke the Brunell full court press time after time. Panthers held out for an eight point win which keeps them firmly placed in the middle of the table with two games left in the regular season.

Up next for the girls is struggling NUIG, in Galway next Saturday afternoon.