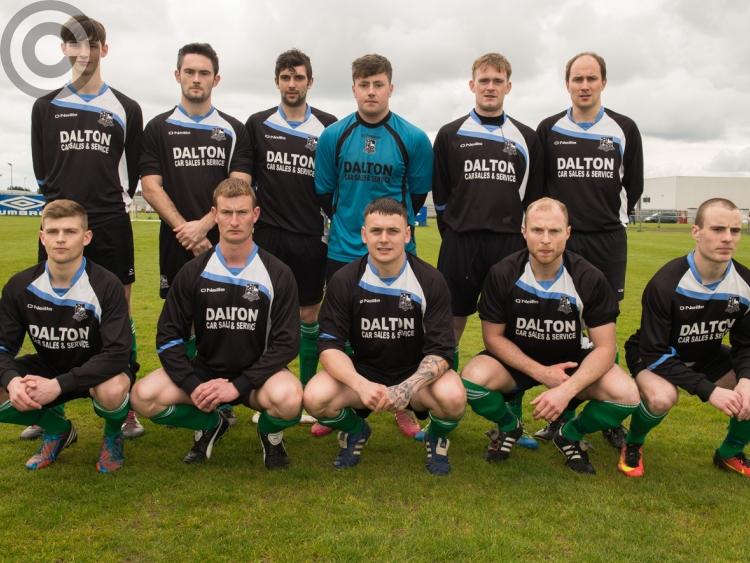 Raheen FC have had an amazing season to date, already winning the league, but winning the Paddy Cotter Cup proved a step too far as they came up against a strong Mullingar Town team who are three divisions above them.

In what was a slow start to the game, Mullingar Town had a penalty call waved away when Simon Quinn went down in the box. The first chance of the game fell to Mullingar Town, as Dean Dinnegan’s corner found the head of Barry Egerton, but his header was deflected wide.

Mullingar Town were putting Raheen under an enormous amount of pressure, and that pressure soon told, as striker Simon Quinn scored an absolutely marvellous goal.

After Raheen failed to clear their lines, the ball was played into Simon Quinn who chested it, kicked it up to volley height and floated one gloriously over a stranded Joseph Walshe. The Mullingar Town crowd were ecstatic seeing this, and it got them in full voice for the remainder of the game.

Raheen looked very nervous on the ball during the first half, and Mullingar Town were punishing them. Raheen finally got their first shot away mid-way through the half, but Mikey Dalton’s shot drifted wide of Adrian Rapacki’s post.

Mullingar Town put the ball in the net, but Simon Quinn was adjudged to have been offside when he headed the ball in from close range. However, this didn’t seem to distract Mullingar Town in the slightest, as they did get their second before half time. Michael Fadge’s free kick set piece found Keith McMahon’s head at the front post, and his resulting header found the back of the net.

Raheen badly needed a quick goal in the opening stages in the second half, but Mullingar Town’s defence was standing tall. Raheen did have a big opportunity to pull one back when substitute Darren Brennan found himself with acres of space in the box, but he could only direct his shot straight at keeper Adrian Rapicki. When Mikey Dalton’s header from a corner hit the post from close range, it felt like Raheen’s luck had run out.

Mullingar Town’s Mark Hickey spurned an opportunity to seal the game when he opted to chip Walshe in goals instead of placing it, with the ball going over the crossbar.

However, despite Raheen dominating the half, they were caught out by a swift Mullingar Town counter-attack. Michael Fadge, who had been impressive all game, sealed Mullingar Town’s name on the Paddy Cotter Cup trophy with a cool finish.