UPDATED - Wexford up next as Laois see off Kerry in Tralee 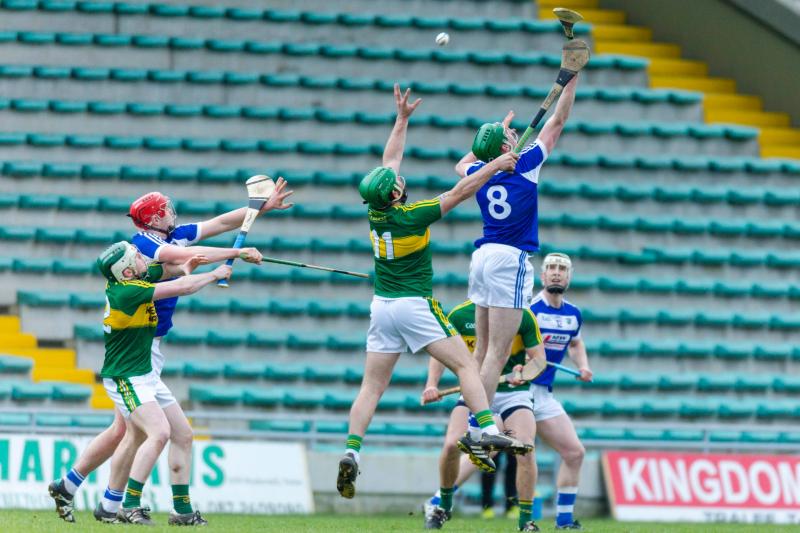 A strong second half from Laois saw them to hard-fought three point win over Kerry in Tralee on Sunday, setting up a Leinster SHC quarter-final clash with Wexford.

Laois can now look forward to hosting an in-form Wexford side to O'Moore Park on Sunday, May 28, as they try to plot the downfall of Davy Fitzgerald in his first Leinster SHC game as manager.

In Sunday's game, Laois got off to a bright start, Ross King tapping over a nice point off the hurl with less than 40 seconds on the clock.

The Kerry response came from a Shane Nolan free, but Laois quickly re-took the lead, and in impressive style too. Paddy Purcell stole in from the right wing, and got close enough to rattle a shot at goal. Martin Stackpoole saved it, but Neil Foyle picked up the rebound and hit the back of the net from ten yards out.

It was an ideal start to the half for Laois, but they didn't build on it, and Kerry reeled them in. Jordan Conway started the Kerry comeback with a point, and Mikey Boyle added another a minute later. Shane Nolan then floated over a free and the teams were level, before Enda Rowland produced a brilliant, diving save to deny Padraig Boyle.

Nolan tapped over the resulting 65, but that score finally jolted Laois back to life, and King stroked over two frees to get Laois back in front.

Kerry responded in kind, with Shane Nolan pointing two frees himself to keep up the tit-for-tat nature of the game. Ross King was proving to be the only source of scores for Laois at this stage, and he added another free before Paddy Purcell burst forward from midfield to score a fine point.

A controversial point for Shane Nolan, which appeared to have gone wide, was counted nonetheless as the teams remained level. Ten minutes would pass before another score was registered, with the game going through a more physical, scrappy spell during this period.

When the scoring resumed, Aaron Dunphy launched over a fine point from distance, but Laois were then hit with double blow after that. Twice in the space of a minute Shane Nolan rattled the Laois net, and even though King got another free for Laois, Kerry were well in control at half time, 2-8 to 1-7. In truth, it was a disappointing half from Laois, who never really came close to their best form at any stage.

Thankfully, that form did make an appearance in the second half, as Laois blitzed Kerry from the start. King got the ball rolling by pointing two frees, before Sean Downey added a fine effort from play.

With Laois now on the front foot, they pushed on. Neil Foyle set up Paddy Purcell in the square, and his shot beat Stackpoole for Laois' second goal.

Ross King added another point for Laois soon after, and having trailed by four at the break, Laois were now three ahead with nine minutes of the restart.

John Buckley got a point back for Kerry, but Laois responded with four points on the trot to go six ahead, and when Sean Weir was red-carded for Kerry, it looked like Laois would see the game out from there.

If Laois v Kerry games have thought us anything, however, it is that things are rarely that straightforward. With 15 minutes to go, Padriag Boyle rifled a 21 yard free to the net for Kerry, and Kerry had thrown themselves a lifeline.

Laois tightened things up after that, however, and with Ross King picking off frees at the other end, they managed to hold Kerry at bay to make it three wins from three in the Leinster Round Robin.