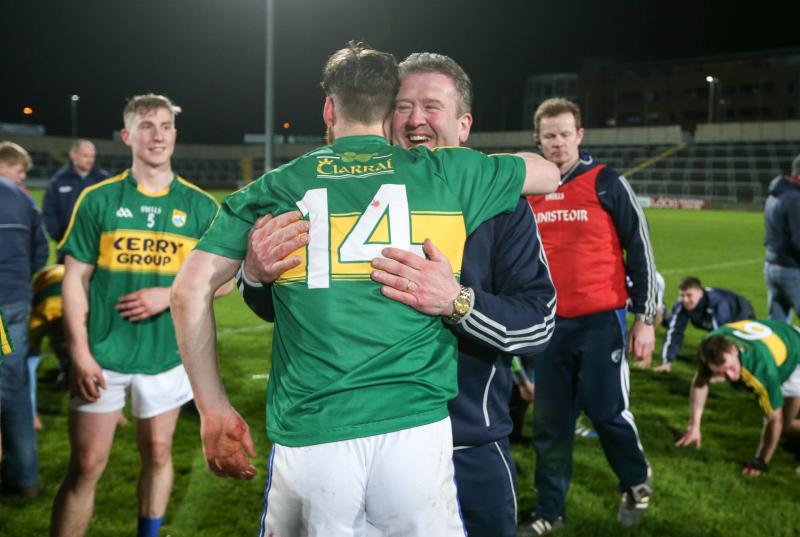 Laois senior hurling manager Eamonn Kelly hailed the importance of his team's win over Kerry on Sunday, as they qualified for the Leinster SHC with a 100% record in the Round Robin series.

Speaking after the game, the Tipp man revealed the victory was important for the team after they had suffered some bad defeats in Tralee in the past. “For us, psychologically, it was a big one coming down here.

“We thought we prepared very well on the 12th of February for the first round of the league, but the lads felt like they had dejá vú, it was like last year all over again, they were turned over, and they felt they owed it to themselves to go out and perform.

“The did it the first day, it was probably a patchy enough first half, particualrly giving away the two goals before half time, but I thought they stuck to their task well in the second half.”

The second half was certainly when Laois hit their stride, but it was a significant change from the first, when they were completely off the boil. Kerry's two goals before half time gave them a four point lead at the interval, and Laois could have few complaints.

The Laois team weren't in the dressing room for long, and Kelly admitted there was a good reason his side were back on the pitch so quickly. “It wasn't a pretty place to be, our dressing room at half time, so I think the lads were just happy to get out.

“We just felt, after all the talking we were doing, we weren't implementing it. To be fair, they wanted to get out themselves to try and right what happened in the first half.”

Kelly also revealed the significance of this win for his squad. “We spoke about this during the week with Oisín (McConville), I don't think there was anyone in the squad who was on a Laois team that won four games in a row, be it in the Round Robin, but it's where we're competitive.

“Hopefully that will feed into the confidence going forward, I suppose I'm blue in the face from saying it, but we've a very honest bunch of lads, they are very enjoyable to work with and I'm happy they are getting a few results.

“I probably would have been happier, because I had a lot of good times down here in Kerry, if they could have gotten through as well, I thought the scoring.”

Laois can proceed to the quarter-finals with confidence, but unfortunately not with a fully-fit panel, as Paddy Whelan and Ryan Mullaney were both forced off with injuries here, Ben Conroy is out for the year with a shoulder injury, and Cahir Healy (hamstring) and Willie Dunphy (concussion) were ruled out before the game.

As he tries to get as many of his panel back fit as possible the Laois boss joked that they will have to consider all options. “It's Lourdes water and rosary beads we'll need, we'll have to assess them as we are going along. We really don't know yet, but Willie (Dunphy) should be back.”

With Wexford now up next, Laois will be massive underdogs going into the game, but they did at least give Davy Fitzgerald's side a right rattle when they met in the final round of the league. That performance, Kelly feels, will have Wexford forewarned. “It's unfortunate because they remember it too, so they're not going to be taking us for granted.

“We gave it a good go that day, but we'll get out own house in order and get as many players as we can back on the field over the next two weeks, we'll see how it goes.”

Laois will play Wexford in O'Moore Park on Sunday, May 28, with the time yet to be confirmed by Leinster GAA.

Read our match report from the game HERE