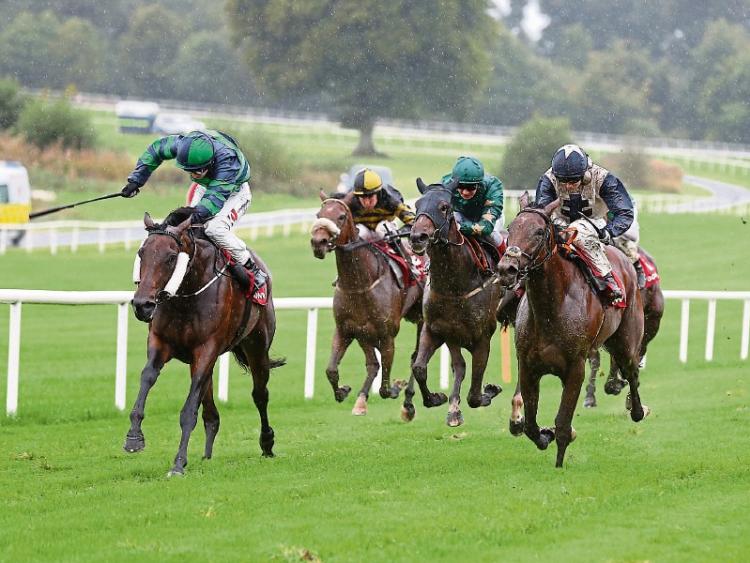 MISS POWER (EVNS) was advised here last week before being declared a non-runner. We're sticking with her on her trip to Down Royal on Saturday, and it represents her best chance to get her head in front again. Eddie Lynam has trained a number of stellar sprinting recruits, including SOLE POWER, and this filly could be the next one if she can put everything together in the 14:35 race on the card here. She was six lengths behind the winner on her racecourse debut but did win her next two, before being outgunned in a classic encounter by CELEBRATION. Prior to that, she accounted for MAGIC BEAR by two lengths at Navan in October, before improving again to take the scalp of GO KART at Naas on good to firm ground earlier this month. In her loss to CELEBRATION, she finished second by less than a length, and once again had GO KART in behind her. GO KART ran well to be second at Cork since, and given the nature of this field, MISS POWER is a worthy favourite. She could be a sprinting superstar in time, but it is on days like these she needs to earn her stripes.

There's an interesting renewal of the Magner's Ulster Derby at 15:45 at Down Royal on Saturday as all the top yards saddle runners. Harrington, O'Brien and Weld have all steered entrants at this race, but I'm siding with Jim Bolger's CLONGOWES (10/1). CLONGOWES has run seven times, finishing third twice and second on five further occasions without getting onto a winning thread. That aside, he has some stellar form in the book, and his run behind BELGRAVIA at Leopardstown in May was particularly eye-catching. He acted well on the good to firm surface, similar to the ground forecast for Saturday, and despite going to the front too early, stuck his head down well to plug on for second. BELGRAVIA went on to finish just a couple of lengths behind the impressive NAUGHTY OR NICE at Navan and was fancied for the Queen's Vase at Royal Ascot this week. CLONGOWES also previously chased home VENICE BEACH, who went on to win the Chester Vase subsequently and run in the Epsom Derby. It's fair to say CLONGOWES has run into a few good ones in defeat, and this could be his chance to finally land the odds.

Over at Gowran Park on Saturday evening, SHANPALLAS (16/1) is an intriguing contender for Charles Byrnes, one of the shrewdest operators in the business. SHANPALLAS ran well during the spring/summer of 2016, running three times and winning once in a race at Ballinrobe in May. That came after a warm up run following a lengthy break, and he's in a similar situation this year. He put in two poor showings late last year before being handed a break and came back at Punchestown in May, finishing seven lengths behind CAOLANEOIN. He was just four lengths behind MR FIFTYONE in the same race, a horse who had been within five lengths of the imperious DON'T TOUCH IT at the Kildare track a month earlier. SHANPALLAS has won numerous races on good ground, and the going looks set to be dry on Saturday, giving him an excellent chance to get his head in front once more in this 17:05 contest. Charles Byrnes' horses can run well fresh, but always come on for a run, meaning this one has to come into the reckoning.

On Sunday afternoon, the last race on the Gowran Park card, the 17:05 event, is a competitive renewal where I've sided with TENNESSEE WILDCAT (4/1), easily the highest rated horse in the field. Trained by Ger Lyons, who had the winner of this very race in 2015, this seven-year-old has some classy form in the book, although not a lot of it is all that recent. He won a listed contest at Leopardstown in 2015, and has run well in similar company on a number of occasions since. Although ninth of fifteen at Naas in May on his most recent start, he was still just three lengths behind the winner, ADMODUM. Some of his best form has come on good or good to firm ground, and with dry conditions expected and a short break to his name, this one should be there or thereabouts. TITUS is a real danger despite this being just his third start under rules. Dermot Weld's runner beat both VENICE BEACH and CLONGOWES on debut, and despite an uninspiring follow-up run, he should improve again to be in with a shot here. MASSAYAN is also a danger coming here in search of a hat-trick.