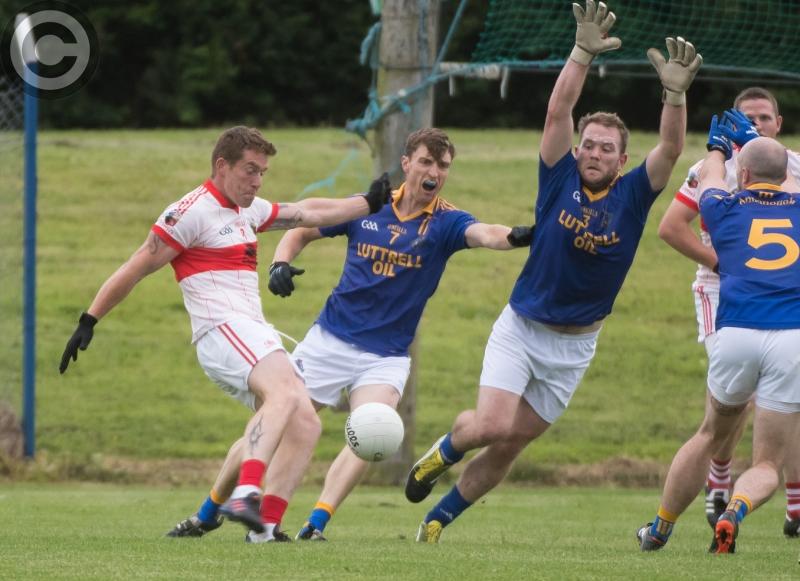 Emo began life back in the IFC with a comfortable fifteen point victory over Annanough last Thursday night in Mountmellick.

After their surprise demotion last year, they had come into the opening round of this competition with the favourites tag hanging around their necks, and the duly lived up to it.

They were five points clear with a little over ten minutes played, and were never really troubled by an Annanough side which, on the basis of this showing, will have to be wary of a relegation battle.

Darren Strong pushed Emo into the lead inside of a minute, and Paul Lawlor took centre-stage after that, as he rattled off the next four points. His first came from play, and he added three more from placed balls to keep his team in the ascendency.

Shane Stapleton missed a glorious goal chance for Annanough at the other end, and Chris Gleeson then hit the target as Emo went six clear.

Donal Miller finally got Annanough up and running with their first point in the fifteenth minute, but another free from Paul Lawlor quickly cancelled that out.

Elliott Scully provided the response for Annanough this time, as he pointed from close range, but the Emo response was particularly impressive. Nigel Murphy raced down the right wing for Emo, before cutting in towards goal, and from 25 yards out he unleashed an powerful shot which dipped just under the crossbar for a brilliant goal.

The second half continued in much the same vein, with Emo hitting the first two points as they went ten points clear. Again it was Donal Miller who responded for Annanough, but Nigel Murphy and Shane Murphy kept Emo on the front foot.

A brilliant curling effort from Donal Miller continued his one-man attempt to keep Annanough in the game, but Chris Gleeson's emphatic finish moments later for Emo's second goal killed off what remained of the game.

To Annanough's credit they kept battling away, and looked set to get a goal back when John Scully was set up 12 yards out. His powerful shot was heading for the net until David Whelan produced a magnificent save to deny him.

Annanough would get a goal before it was over though, as David Booth was fouled in the are. Elliott Scully's effort came back off the post, but he tucked away the rebound.

There was time for just one more score, as Emo got their third goal, through Nigel Murphy, as he finished off a wonderful flowing move by tapping to the net.