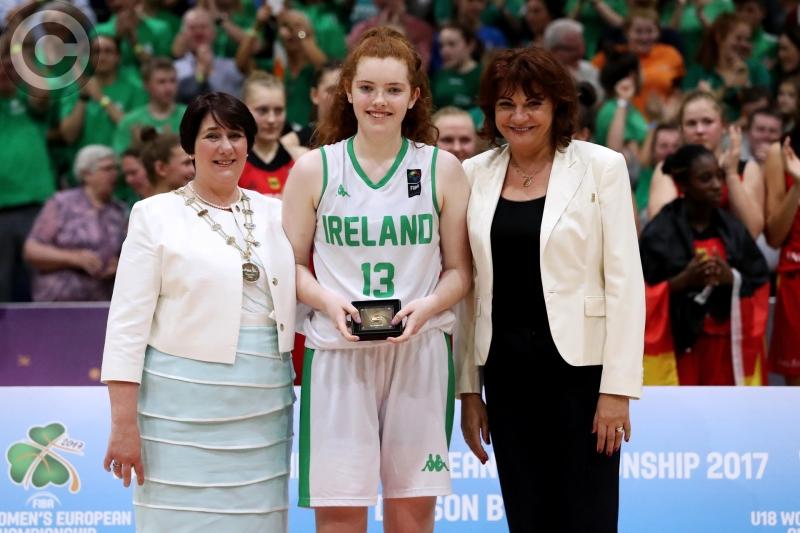 Ireland's Claire Melia was selected for the All Star team. Pic: INPHO/Tommy Dickson

A fairytale campaign unfortunately didn't have a fairytale ending for the Irish U-18 Women's Basketball team on Sunday night, but they will still take a place in the record books after their performances at the FIBA European Championships over the last week.

Portlaoise Panthers duo Claire Melia and Maeve Phelan can reflect on a historic time in their fledgling careers, as they played major roles in helping Ireland qualify for their first ever European basketball final, at any grade. Claire Melia was the star attraction for Ireland, and she was voted on to the All-Star Team of the tournament having lead the team in scoring and rebounds.

Maeve Phelan also greatly enhanced her reputation, and made some crucial plays over the course of the competition for Ireland, particularly against Israel in the quarter-finals, when she came to Ireland's rescue on a number of occasions.

“It’s incredible," said Head Coach Tommy O'Mahony said after last night's final. "Night after night we rolled from one game to the other, we didn’t get a chance to figure out what we’d just done. Tonight wasn’t our night, but the girls have to realize what they’ve done and how big it is in the whole scheme of things. It’s hard to believe, we won’t comprehend it for a few weeks I’d say, but it’s been great.”

Ireland will now compete in the 'A' grade in 2018, another first for the country, while Maeve and Claire will eventually turn their attentions back to the club scene, with both set to feature for the Portlaoise Panthers senior team when the Womens National Super League returns.