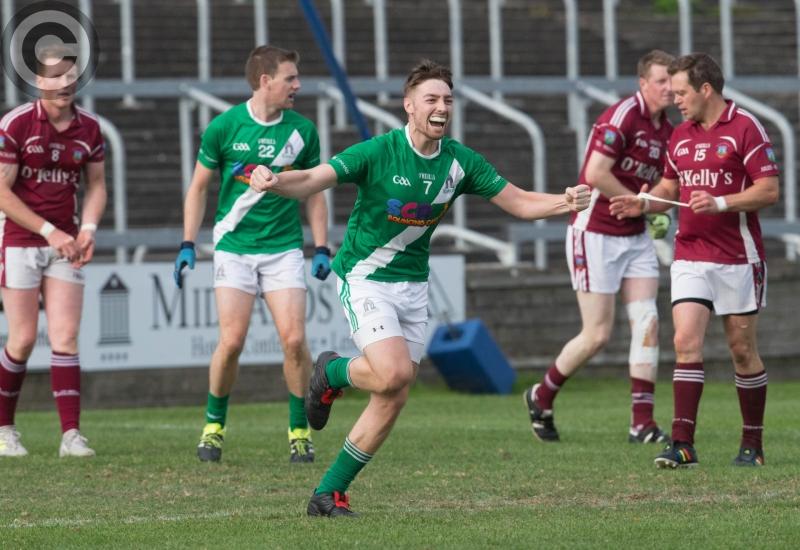 Two late points from substitute Adam Deering proved the difference in O’Moore Park on Sunday evening, as Killeshin dug deep to get the better of Arles-Kilcruise in an exhilarating clash.

Deering was sprung from the bench with ten minutes to go in O’Moore Park and the young Killeshin man made a burning impression as he pointed to put Killleshin into the lead with three minutes remaining, before adding his second less than a minute later.

Ross Munnelly edged one back for Kilcruise, but it was David Aston that showed true resolve to convert a forty-five in the second minute of injury-time to give his side a two point cushion, and put the result beyond all doubt.

Arles-Kilcruise started well with Ross Munnelly and Chris Conway setting the tone early on to give Kilcruise a two point lead inside the opening two minutes. Killeshin eased themselves into the proceedings with a brace of frees from David Aston to level the sides with eleven minutes elapsed.

Killeshin’s first goal arrived a minute later when Mark McDermott claimed possession from the kick-out before feeding Stephen Attride who tee’d up Eoin Lowry to fist the ball into the net for a well-worked goal.

Arles-Kilcruise responded with a fantastic point from full-forward, Fran Egan, as the Kilcruise attacker practically finished his kick on the end-line to squeeze one back, before Ross Munnelly and Chris Conway combined to see the latter close the gap to the minimum on the quarter hour mark.

James Davis landed a huge point from the forty-five under the stand to double their advantage, but Chris Conway’s third of the half closed the gap to the minimum once again.

With twenty-four minutes on the clock Killeshin notched their second goal - some quick thinking from David Aston to take the twenty-one metre free short to Eoin Lowry on the edge of the square afforded the forward his second of the day with a low finish past Ken Kealy.

Kilcruise rallied before the break and a lovely strike from the outside of Kevin Meaney’s boot, followed by a free from Chris Conway halved the Kilcruise deficit with two minutes remaining.

David Aston’s third free of the half edged Killeshin three clear on the thirty minute mark, but there was still time for Kilcruise wing-back, Caomhan Brennan, to power forward and split the posts to leave just two points separating the sides at the interval.

Arles-Kilcruise picked up where they left off as they reopened the scoring with less than twenty-seconds elapsed when Ross Munnelly closed the gap to one points, before Fran Egan levelled the proceedings just two minutes into the half.

David Conway opened his account to edge Kilcruise into the lead, but it was short-lived as Killeshin rattled off four points on the trot through Aston (2), Evan Lowry and Stephen Attride to retake the lead.

Kevin Meaney’s deflected shot found its way over the crossbar, but Eoin Lowry responded with a point of his own. Kilcruise finally broke the deadlock when Fran Egan claimed the kick-out before feeding Dave Conway who split the defence with a looping handpass to Munnelly who rattled the Killeshin net with fifteen minutes to go.

Dermot Nolan got in on the scoring for Kilcruise, as did Cathal Brennan for Killeshin to keep the sides level at sixteen apiece heading into the final ten minutes.

Fran Egan landed a huge point from range, and Nolan added his second as Kilcruise edges ahead, but points from Barry Ryan and Brennan drew the sides level yet again with three minutes to go.

This is where Adam Deering came to the fore. The substitute was only on the pitch a matter of minutes when he traced the black spot to edge Killeshin into the lead, before following up with his second inside a minute to give them a two point cushion.

Ross Munnelly closed the gap to the minimum with a minute to go in normal time, before Colm Munnelly dramatically cleared Eoin Lowry’s shot off the line. David Aston converted the resulting forty-five to put Killeshin through to the next round.