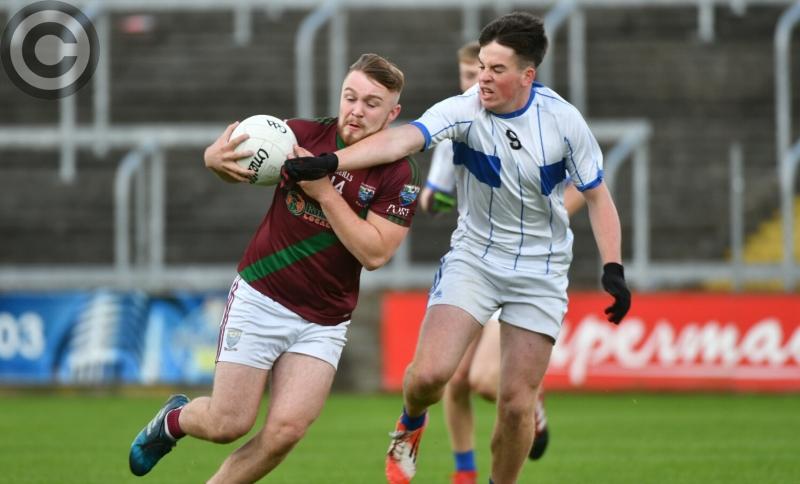 Portarlington are the Laois MFC 'A' champions for 2017 after they proved too strong for Emo-Courtwood-The Rock in Friday night's final.

Ronan Coffey's goal less than a minute into the second half proved to be a crucial score, as they were able to hold off a wasteful Emo-Courtwood-The Rock side in the closing minutes.

Heavy rain through the day in Portlaoise made for a difficult surface, and with a strong breeze added into the mix, it made it very difficult for both teams.

Alan Kinsella opened the scoring with a free in the second minute, but scores were few and far between early on. Portarlington took until the eighth minute to respond, with Ronan Coffey tapping over a close-range free, a score Alan Kinsella canceled out moments later his another free of his own.

It was again left to Ronan Coffey to draw Port level, as he cut in from the right wing and pointed off his left, with those four points the only scores in the opening twenty minutes.

Padraig Kirwan and Curtis Lyons-Carroll swapped points to keep the teams on level scores, but with normal time almost up, Port went ahead. Warren Carroll and Alex Mohan pointed in quick succession to put them two ahead, and even though Alan Kinsella got one back for Emo-Courtwood-The Rock, a Jordan Fallon point left Port 0-6 to 0-4 ahead at half time.

Things got even better for Port within seconds of the restart, as Ronan Coffey's speculative shot looped over Oisin Keogh, hit the post and landed in the net. Alan Kinsella and Coffey then traded frees, to leave Port five clear with twenty minutes left.

Emo-Courtwood-The Rock had probably their most dominant spell of the game after that, in terms of possession at least, but poor shooting let them down time and again, as they kicked five wides in the next ten minutes.

The scoring drought was eventually broken by a Ronan Coffey free, bringing the Portarlington lead to six, with Emo-Courtwood-The Rock unable to get their attack firing

They were given a late lifeline with Niall Dunne won, and then converted, a penalty to leave just three in it, but Portarlington hit back with a Ronan Coffey free. The only other action of note was an unseemly row which broke out in injury time that resulted in four players being yellow-carded, two from either side, as Portarlington ran out four point winners.