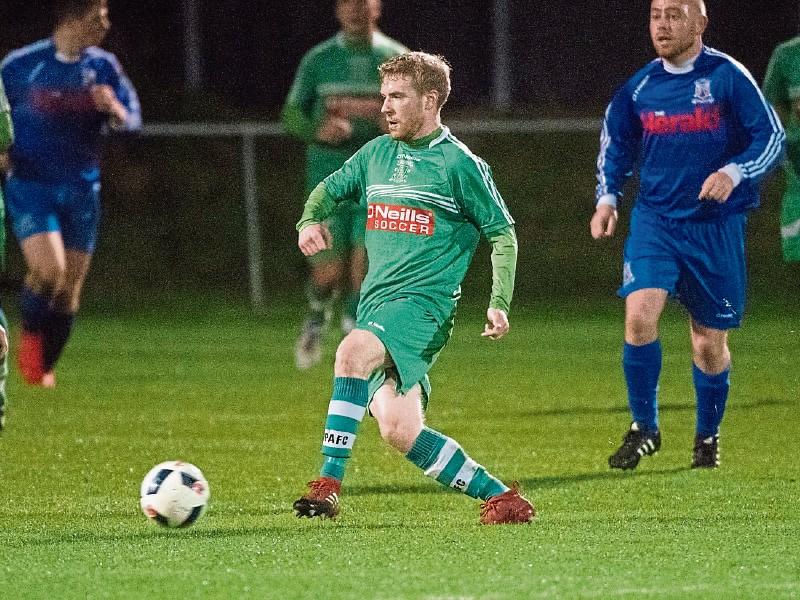 Having defeated Newtown Rangers and Skerries Town away from home in this cup Portlaoise were delighted to get home advantage, but the recent weather meant Portlaoise had to move the game to IT Carlow's all weather pitch, but they opened superbly and were ahead with just two minutes on the clock.

Oisin Fitzpatrick took a quick throw in to Jason Woods, and the 16-year-old went on a brilliant run and cut the ball across goal for Aaron Rafter to tap home for his third goal in a week.

Greenhills dominated possession for the next 12 minutes put failed to create any opportunities, while Portlaoise settled into the game as Greenhills struggled to get to grips with the brilliant Colm Poole and Colm Coss who were both superb throughout.

Poole had two good chances but was denied by some excellent goalkeeping from Paddy Mahon. Damien Dunne went close from distance for Greenhills following a quick free kick but the next chance arrived on the half hour mark.

Colm Coss picked up the ball deep in his own half and went on a great run as space opened up in front of him, but his strike from 25 yards went wide of the post with Mahon beaten. Moments later James Mullaney went on a trade-mark dribble from defense, beating three players but his effort was inches wide.

Colm Coss went close again from distance but the post again denied him as Portlaoise were now pushing hard to go further ahead. Jason Caffrey then went close from a free kick but was just over with Mahon scrambling. Greenhils had a good chance before the break when some good play ended with Dunne shooting over from the edge of the penalty area.

The second half started with Portlaoise dominating possession but Greenhills had a great chance after 51 minutes when Jordan Finn got space inside the penalty area but his effort failed to trouble Joe Walshe.

On 55 minutes Portlaoise had a glorious chance to go two up but Aaron Rafter’s penalty was brilliantly saved low to his left by Mahon to keep his side in the game. Colm Poole and Jason Woods linked up well on the hour mark but Poole’s effort was inches over.

Greenhills were next to go close but Joe Walshe went full stretch to push away Darren Goode’s free kick but from the resultant throw in they were awarded a penalty and Goode dispatched low to the corner to put Greenhills level.

Goode went close again two minutes later but his free kick was blocked and out for a corner. Finn should have put Greenhills ahead after some sloppy play but he somehow missed the target from 10 yards and the game moved to extra time.

Neither side created a chance in the first half of extra time but Brian Ging scored his first goal for Portlaoise ten minutes into the second period with a stunning strike from 25 yards that gave Mahon no chance.

Portlaoise were denied a third when Jason Caffrey’s free kick was headed home by Colm Coss but somehow the referee awarded a free kick against Coss, and moments later Jason Murphy had a great chance but shot over with four Portlaoise players bearing down on goal.

Deep in injury time Greenhills were level, a long throw was not dealt with and with the last kick of the game Goode scored to bring the game to a penalty shootout.

Joe Walshe emerged the hero in the shootout for Portlaoise with three stunning saves, all three at full stretch to deny Greenhills, while Niall Doran, Jason Caffrey and Jason Murphy all netted to send Portlaoise into the semi-finals.