Laois will face Dublin in the Leinster Senior Football Final 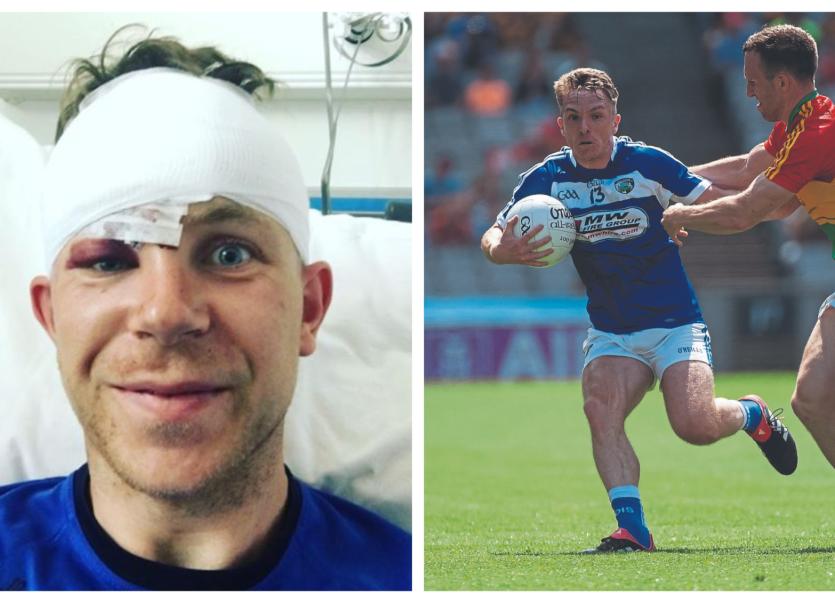 Injured Stephen Attride on the left. Ross Munnelly in action against Carlow on the right.

Long serving Laois GAA player, Ross Munnelly, has praised the bravery shown by Attride who was stretchered off in the closing minutes of the semi-final after he threw himself on a breaking ball.

The clash resulted in his head accidentally colliding with the leg of Carlow player Ciaran Moran. This prevented Carlow from going on the attack, but also resulted in the Killeshin club player suffering the double skull fracture, 25 stitches above his eye and a concussion.

Ross Munnelly told RTÉ 2fm's Game On that it was a great act of bravery from the 23-year-old team captain.

"It was just an unbelievable level of bravery from him in the last couple of minutes when Carlow were potentially on a counter-attack.

"Unfortunately there was a collision that left him in a bad way but it is what it is at this stage.

"Thank God Steve is fit and well, that's the main thing that he was responsive so fast after. We'll be fully behind him in the next two weeks and after that. I think in the circumstances of the way the game was yesterday and the type of game that it was - that epitomised our performance.

"That commitment when the game was on the line and those small inches that we had to win."

Bad concussion, Two fractures on my skull and 25 stitches above my eye... BUT I’m happy, Laois through to the Leinster Final. #I’llbeback #gaa #pump #Laois

Munnelly revealed that he once coached Attride when he was playing on a DCU Freshers team. He sais Attride's defensive play helped them secure the win against neighbouring Carlow.

"Right to the very end [we were] led by our captain. It was an outstanding piece of bravery and for reasons like that we got over the line and we're in a Leinster final.

"His career will continue to develop long after this. This will only be a minor setback for him."

Laois will now take on the reigning Leinster and All-Ireland champions Dublin, who are aiming to win an incredible eighth consecutive provincial crown.

This will be the Laois's first senior Leinster final appearance since 2007, where they lost to Dublin by six points.

Munnelly said that Laois were in a 'bad place' last summer after suffering relegation to Division 4, but says that the team is now focused on securing promotion out of the bottom tier.

"We've backed ourselves and we're building a nice team. The management team have been fantastic with the group of players and helping to build confidence and belief in what we're doing. We're just taking it one step at a time.

"For us to have won three championship games in-a-row in Leinster at this point in time gives us great confidence. We know what we're building towards and it doesn't happen over night but certainly as a player when you're playing with a renewed sense of confidence, and you can feel it within the group, it does make things an awful lot easier.

"We've had our own achievement in getting to the Leinster final and now we've to knuckle down and get a performance so we obviously just focus on ourselves.

"It's irrelevant to the group what other people say and do and think and that's the way it has to be. That's just the way the game is."