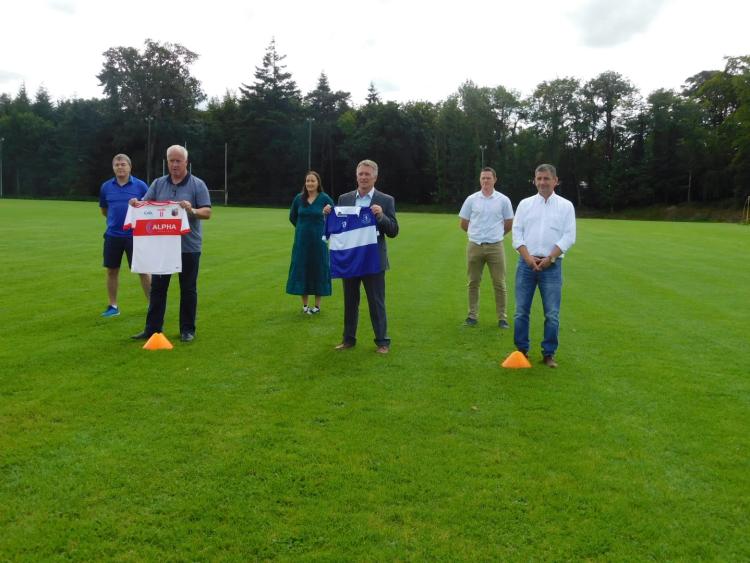 Members of the fundraising committee pictured last Saturday in Emo

The GAA may be closed down in Laois at the moment but never under estimate the power of the local and community based ethos that surrounds it.

Known throughout the county and indeed further afield, Ger Lawlor is facing the battle of his life after suffering a severe stroke but his GAA brothers and sisters have his back.

He was a key member of the team that won the National League in 1986 while he also lined out for Laois in the 1981 Leinster final.

He is a big Emo GAA man and he lined out for them in County finals in 1986 and 1994.
Since his playing days came to an end, he has been very active in management and along with spells with both Laois seniors and U21's, he managed a number of clubs in Limerick and Clare after moving down south in the mid 90's. He enjoyed success with Monaleen in Limerick and both Kilmurray-Ibrickane and Cooraclare in Clare.

The friends of Ger committee and Emo GAA have joined forces to help out one of their own and are calling on the GAA clubs to row in behind them and support their upcoming Golf Classic.

While they are focusing on GAA clubs, the Golf Classic is open to anyone who wished to take part and contribute in any way they can.

The committee is being fronted by Colm Browne (Chairman), Sean Dempsey (Secretary) and Tracey Lawlor (Treasurer)
In a letter distributed last week, Emo GAA and the friends of Ger committee outlined their intentions.

“As you are all aware, Ger Lawlor was a very talented footballer who gave many great years to both Laois and Emo GAA at all levels during his long and colourful football career.

“He was part of the infamous 86 team that won the National League and provided us with many great memories in both his club and county jersey.

“Once he finished playing, he continued to be immersed in the GAA and was involved as a coach with the Laois U21's and a selector with Laois seniors. He also trained Emo GAA.

“Still to this day, he has trained numerous other clubs in both Limerick and Clare where he now lives. He has given his life to GAA and now in his time of need, we are looking to show him some support and show him the true colours of the GAA community.

“In March of this year at only 60 years of age, he suffered a severe stroke which has left him completely paralysed on his left side and wheelchair bound. He spent time in numerous hospitals and in rehab and is currently in Cratloe Nursing home in County Clare.

“As a result of the stroke, he is now deemed long term care and will live out his life in a nursing home or at home with numerous carers.

“Friends of Ger in conjunction with Emo GAA are running a golf classic to raise much needed funds to help Ger and his wife Majella to get through this expensive time.

“The Golf Classic is taking place on Friday September 11th in Portarlington Golf Club. Teams of four are 160 euro and tee boxed can be purchased for 100 euro. Five euro tickets will also be on sale in the coming weeks.

“We look forward to your support in this event and are hopeful the GAA community can get behind it and support in any way you can.”

Anyone wishing to put in a team or contribute in other ways can contact committee members below.