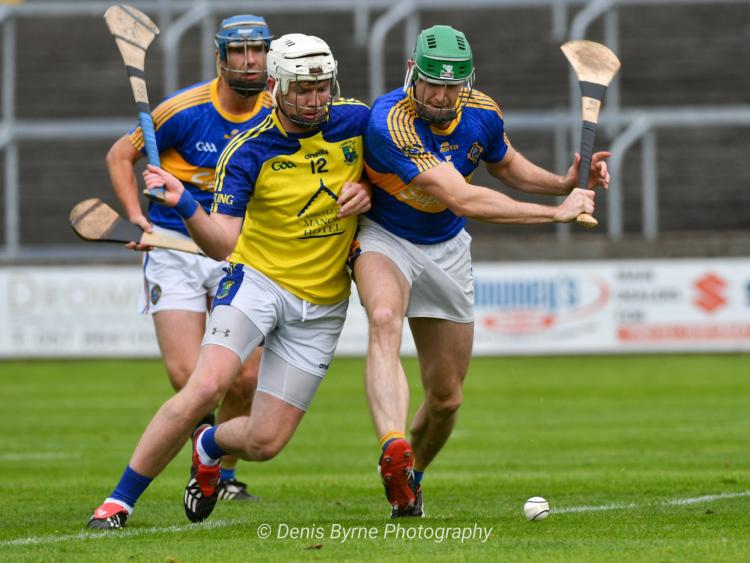 Action from Clough/Ballacolla and Abbeyleix

In a contest that had everything from superb goals, points and red cards on both sides, it was Clough-Ballacolla who picked up the points in O’Moore Park against a resilient Abbeyleix outfit to move to the top of Group A.

Clough-Ballacolla’s Stephen Maher and Abbeyleix’s Eoghan Fennelly traded frees to begin proceedings in O’Moore Park, before our first goal arrived after only a couple minutes of play.

A long ball sent into the Clough-Ballacolla full-forward line fell kindly to Stephen ‘Picky’ Maher, and his effort was too powerful for even Enda Rowland to keep out, despite getting a hurl to it.

Stephen Maher sent over two further points from placed balls, including one that was over the half-way line, and Clough-Ballacolla looked to be putting their stamp on this match. To Abbeyleix’s credit though, they managed to keep it competitive up until the water break.

Both Abbeyleix midfielders, Fionan Mahony and Liam Delaney, fired over excellent efforts from distance, and Eoghan Fennelly slotted over his second free to bring them back within two points.

However, after the water break ended, Clough-Ballacolla took control of the affair. Aidan Corby played a ball over the top to the Willie Dunphy, who beat his man for pace and drilled it between Enda Rowland’s legs for Clough-Ballacolla’s second goal.

Clough-Ballacolla landed a further three points in succession to add to their advantage, with Willie Dunphy and Stephen Maher proving too hot to handle from an Abbeyleix perspective.

A third Clough-Ballacolla arrived soon after, as John Dwyer used his strength to hold off Abbeyleix challenges and win the ball, before Dwyer buried another past Rowland in goals.

Abbeyleix ended the half on a positive note, with three Eoghan Fennelly frees on the trot. Clough-Ballacolla held a 3-9 to 0-8 lead at half-time in O’Moore Park.

Before the first half ended, you feared Abbeyleix might roll over and Clough-Ballacolla would dominate the rest of the second-half. However, Abbeyleix refused to throw in the towel, and they were given a bit of hope with the start they made to the second-half.

Midfielder Liam Delaney spotted the run of corner-forward Aaron Brennan inside, and played a cute pass to him. Brennan still had a lot of work to do, but he managed to swivel his body and slide the ball into the Clough-Ballacolla net for Abbeyleix’s first goal.

Ciaran Carroll notched another point for Abbeyleix from play to get them within two goals. Clough-Ballacolla showed their experience though, with Stephen Maher scoring two points to steady any potential storm.

Fennelly and Maher traded more scores, before Willie Dunphy delivered a sensational score from distance for Clough-Ballacolla. Abbeyleix continued biting away at the deficit, and three more consecutive frees from Fennelly had them within six points before the water break.

The break was the worst thing that could have happened for Abbeyleix though, as Clough-Ballacolla took control again and dominated the remainder of the affair. Willie Dunphy grabbed a sublime goal just after the break, as he fired it into the bottom left corner.

The two Willie’s, Hyland and Dunphy, added to Clough-Ballacolla’s advantage, before Ciaran Byrne grabbed a consolation goal for Abbeyleix near the end.

Despite the game being over as a contest, the drama didn’t stop there. Referee Padraig Dunne dished out four red cards before the final whistle came due to handbags at the end. Eoin Doyle received a straight red for Clough-Ballacolla, while Robbie Phelan picked up a second yellow.

Abbeyleix’s Ryan Peacock was also shown a straight red, while Clough-Ballacolla’s Ronan Broderick received a black card to add to his yellow from earlier for a separate incident.