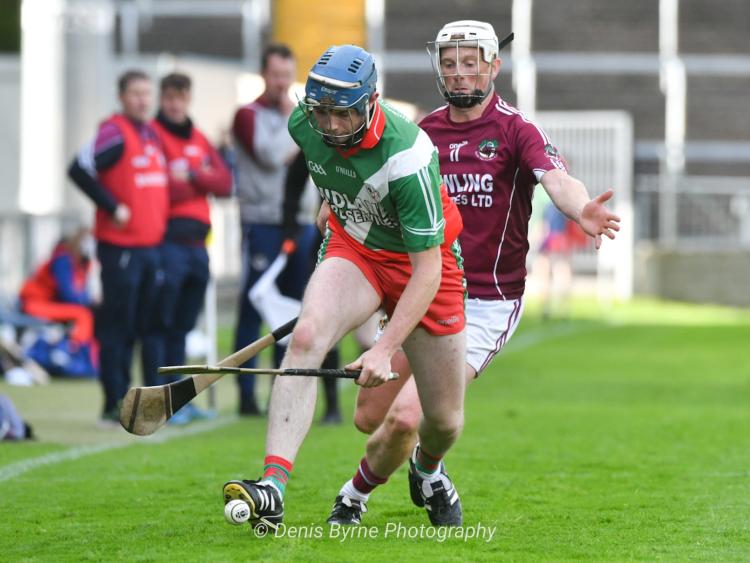 This Laois Senior Hurling Championship round two clash was about as one-sided as it can get, as unfortunately Ballinakill ran into a ruthless and powerful Borris-Kilcotton side that will be looking to go one step further than last season and win the Championship.

Borris-Kilcotton started this second round clash in the ruthless fashion that they would continue throughout the evening. Ballinakill nervously failed to clear their lines at the back, and Emmet Jones pounced on this mistake to fire in the first of Borris-Kilcotton’s six goals.

Emmet Jones quickly added a point to his goal, before Ballinakill got on the scoreboard in O’Moore Park through an Eamon Jackman converted placed ball.

However, Borris-Kilcotton continued to steamroll through the Ballinakill backline. Joe Campion scored two quick-fire goals in the space of minutes (both fine team moves) and midfielder Stephen Dunphy got on the scoresheet to almost put the game beyond Ballinakill already.

Eamon Jackman (free) and Seamus Fitzpatrick fired a score each for Ballinakill in response, but further Borris-Kilcotton points from Emmet Jones, PJ Scully (x2) and Stephen Dunphy were followed their fourth goal with only fifteen minutes played.

PJ Scully sent a long free into full-forward Neil Foyle, who used his strength to shrug off any challenges and then buried it into the back of the net.

Seamus Fitzpatrick landed his second score for Ballinakill, which was met by two more Scully points, one a free and the other a sideline cut. Ballinakill hit three on the trot through Jackman (x2) and a superb Cha Dwyer effort, but again, Borris-Kilcotton shot them down.

Joe Campion pointed, before the fifth goal arrived. Campion was dragged down just outside the square, and Scully stepped up to drive the sliotar in off the underside of the crossbar.

Points from Borris-Kilcotton wing-forwards Aaron Dunphy and Colm Stapleton followed, before Gearoid Lynch and Lir McDonald Ballinakill points ended the half. Borris-Kilcotton had the game well won at that stage, leading 5-11 to 0-9 at the interval.

READ ALSO: Clough/Ballacolla turn on the style to defeat Abbeyleix