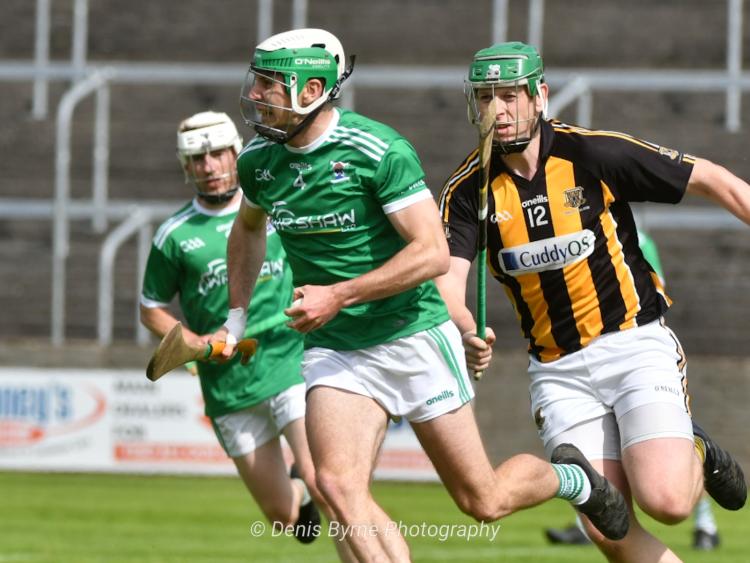 Ruaidhri C Fennell burts out from the back for Rosenallis

Played in ideal conditions in MW Hire O’Moore Park, the Rosenallis men led from pillar to post and blew Camross out of the water with their intensity and determination.

They were hungrier in the tackle and in the rucks as Patrick Keating led the way with 1-8 on a famous day for the club who were just promoted to the Senior ranks last year.

For Camross, it is a major setback. They will know need to beat Ballinakill in their last group game to avoid a relegation playoff and these next two weeks will be massive for them.

Rosenallis are one step closer to the semi finals but mathematically, are not through out of group B yet as a Ballinakill win over Camross and a Borris Kilcotton win over Rosenallis will leave Rosenallis and Ballinakill level on points with score difference coming into play.

The underdogs got a fantastic start and led 0-8 to 0-0 after 15 minutes. Patrick Keating was the main man in those early stages with four points while full forward Brian Fitzpatrick also chipped in with two.

Camross couldn’t get anything going with Zane Keenan even missing a routine free.

After the water break, Camross grabbed their opening two scores of the game through Eoin Gaughan and Mark Dowling.

Dowling then got a fortunate goal with an attempted effort at a point dribbled towards goals but Rosenallis keeper Stephen Kelly took his eye off it and it ended up in the net.

Now 0-9 to 1-2, it looked like Camross might be back in business but with the next attack, Patrick Keating replied with a goal to swing the momentum back.

Rosenallis went on to have the better of the last 10 minutes with John Maher and Keating landing points as they led 1-13 to 1-3 at the break.

Keating picked up where he left off after the restart and pointed twice. Zane Keenan replied for Camross but Rosenallis were keeping the scoreboard ticking over through Keating and Jack Conroy.

Joe Phelan pulled a goal back for Camross but with the last action before the water break, Brian Fitzpatrick did extremely well to keep the ball in play and squared to John O’Loughlin who finished to the net to leave Rosenallis leading 2-18 to 2-6 with 15 minutes to play.

Mark Dowling got another goal back for Camross but Rosenallis never let up and a point from a free inside his own half from keeper Stephen Kelly brought the curtain down on a famous day for the club.