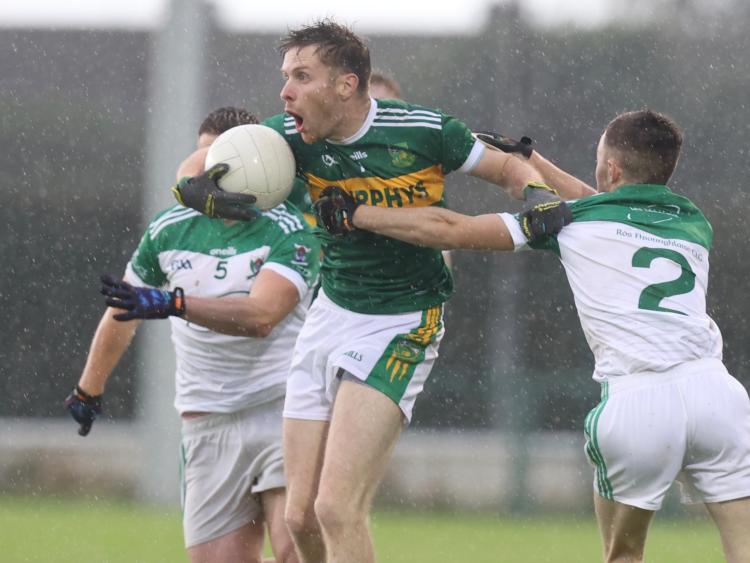 Ballylinan bounced back from their opening round defeat to Portlaoise to battle past Rosenallis and seal a place in the Laois SFC Round 3.

In a low-scoring and tense affair at the LOETB Centre of Excellence, Gary Walsh proved his worth to Ballylinan once again as he registered 0-8, while the winners also had to contend with playing almost all the second half with only 14 men.

They will have been relieved at the final whistle and certainly have the ability to progress to the quarter-finals or further in this competition. For Rosenallis, they now head to the relegation playoffs after two narrow losses, but should be able to steel themselves to avoid a drop back to the IFC ranks.

They had taken an early lead here through a Colm Poole free, as the game got under way in awful conditions, with heavy rain falling for most of the first half.

Gary Walsh draw Ballylinan level from a 45 after his shot for goal was tipped past the post, and he was then fouled off the ball to allow him tap over a close-range free.

Poole replied for Rosenallis before they re-took the lead from a Ronan Murray free. That would be their last score of the half, however, as Ballylinan rattled off three unanswered points from Walsh (2) and Alan Farrell to lead 0-5 to 0-3 at the interval.

The Rosenallis team talk worked miracles on the restart as they quickly drew level, Cathal C. Fennell and Donagh Callaly on target for them. Ballylinan then lost Pauraic McEvoy to a second yellow card as things looked to be falling in Rosenallis’ favour, but it would be false dawn.

Gary Walsh and Brian Fitzpatrick traded points before Ballylinan took control. They hit the next five points without reply to put themselves in pole position, as Walsh (2), Jamie Farrell, Alan Farrell and Cathail Dunne all hit the target.

Rosenallis tried to launch a late comeback, and with a bit of luck they could have pulled it off. Brian Fitzpatrick saw his shot for goal cannon off the crossbar and Marcus Redmond’s effort drew a save from Podge Walsh.

Ronan Murray (free) and Fitzpatrick did get them back within three, but Walsh’s eighth point of the night eventually saw Ballylinan to victory.