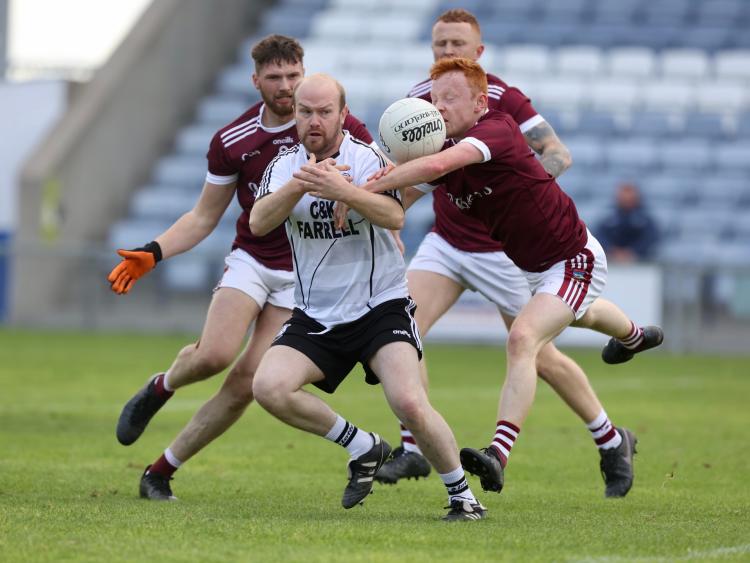 The Kingston brothers ran riot in O’Moore Park on Sunday afternoon as Arles Killeen won the battle of Arles and condemned Arles Kilcruise to the relegation semi finals.

Both were in last chance saloon but it’s the Killeen men who march on as first half goals from Donal Kingston and Sean O’Shea set them underway to a somewhat facile win over their near neighbours.

The move of Paul Kingston out to midfield was a master stroke as he came to the fore and his brother Donal caused havoc when moved inside to the full forward line.

Chris Conway opened the scoring in the fourth minute with a neat free but it was the Killeen men who went on to open up a 0-3 to 0-1 lead with Paul Kingston, Conor Keightley and Ian Scully all opening their accounts.

Kilcruise got back level with Ross Munnelly to the fore but after Jason Enright and the in form David Conway swapped points, the Killeen men began to pull away.

Chris Conway picked up a black card for Kilcruise and with the next attack, A Donal Kingston effort for a point dropped in over the head of Dermot Nolan and to the back of the net to give them a 1-5 to 0-4 lead on 20 minutes.

Keightley kicked another super score before Sean O’Shea rattled home their second goal to put daylight between the sides at 2-6 to 0-4.

O’Shea was in top form and he added a point while the dominant Paul Kingston, now at midfield, curled over a beauty to make it 2-8 to 0-5.

David Conway pulled one back for Kilcruise but Donal Kingston had the last say of the half with a fisted point to send them in leading 2-9 to 0-6 at half time.

Jason Enright kept Killeen attacking the scoreboard at the start of the second half and while Kilcruise did reply with a brace , Killeen had the two dominant players on show in the Kingston brothers as they kicked excellent points to extend their lead to 2-12 to 0-9 after 43 minutes.

Paul Kingston was on fire and he landed his fifth of the game, all from play, on 47 minutes just before the water break as Killeen were already home and hosed with 15 minutes remaining as they led 2-13 to 0-10.

The last 15 minutes petered out with the result beyond doubt but Kilcruise did finish the game with 14 after David Conway was shown a straight red card and will now miss their crucial relegation semi final.

Donal Kingston kicked two superb scores near the death and despite carrying what looked to be an ankle injury from the start of the game, the towering figure along with his brother Paul, finished with 1-10 between them and all from play.