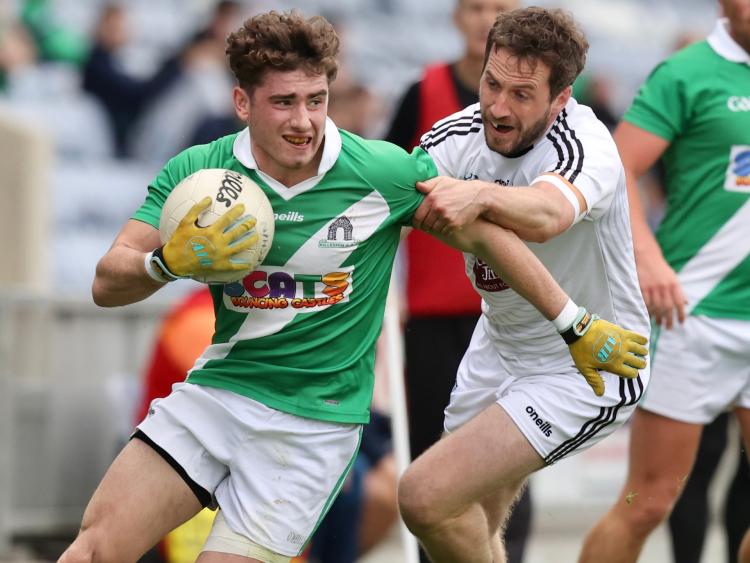 Killeshin will play O’Dempsey’s in round three of the Laois senior football championship after they got their season back on track with a hard earned four point win over Courtwood on Sunday evening.

The last of three games in O’Moore Park, goals from Evan and Eoin Lowry steered last year’s finalists Killeshin to the safety of round three.

A tough, physical encounter, they had that extra bit of forward chemistry and class to see them through on the night with the victors having Shane Bolger excellent in the defence.

Courtwood started the brighter and with a blistering run from the throw in, Sean O’Flynn won a free that Danny Luttrell popped over.

Killeshin weren’t long about getting going though and led by Ross Bolger up front, they overturned a 0-3 to 0-1 deficit to lead 0-4 to 0-3 with David Aston clipping over two frees and Adam Deering curling over a lovely effort.

Ross Bolger kicked his second point and right before the water break, Killeshin fired in the opening goal of the game. Mark Dermott send in a high ball and Evan Lowry judged in perfectly, sneaking in behind the full back line to catch and slip past Matthew Byron to leave it 1-5 to 0-3 after 16 minutes.

Luke Attride kicked Killeshin further in front but Alan Kinsella had a glorious chance to bring Courtwood back into it but his shot fizzed wide of the post.

Michael Doran was getting on a lot of ball in at full forward and his point from a mark extended Killeshin’s lead to 1-7 to 0-3 with 23 minutes gone.

Danny Luttrell was his accurate self from frees for Courtwood but Killeshin attacked at pace a every opportunity and while there was a half goal chance on, Shane Bolger took the right option and popped over.

Courtwood were now seven points behind but they did close out the half well and got two points back through Luttrell and Cian Doyle as Killeshin led 1-8 to 0-6 at the break.

Eoin Lowry got his first of the game three minutes after the restart but Courtwood came down the other end and spurned another glorious goal chance with Paul O’Flynn firing straight at Shane Coakley from point blank range.

With the next attack, Michael Doran pointed at the other end for Killeshin before Evan Lowry added to his goal in the opening half with a well taken point to make it 1-11 to 0-6.

Danny Luttrell clipped over two frees before the water break to bring it back to a six point game.

The Killeshin attack were a far slicker outfit and super interchange between Eoin Lowry and Adam Deering saw the latter kick over his second of the day to give Killeshin a seven point advantage with 14 minutes to go.

Killeshin then let their guard slip and Courtwood came back with a bang. Alan Kinsella’s free came back off the post and into his hand and he fired to the net to bring it back to 1-13 to 1-8. Luttrell then added a free to narrow arrears further but with three minutes to go, Killeshin looked to have put the seal on the win with Eoin Lowry finding the net.

But Courtwood had other ideas and with the next attack, Paddy Wilson hit back with a goal to make it 2-13 to 2-9 as seven minutes of injury time approached.

They got it down again and only trailed by two points but Killeshin had the final say of the game and points from Cathal Brennan and Cialann Mulhall sealed a four point win.