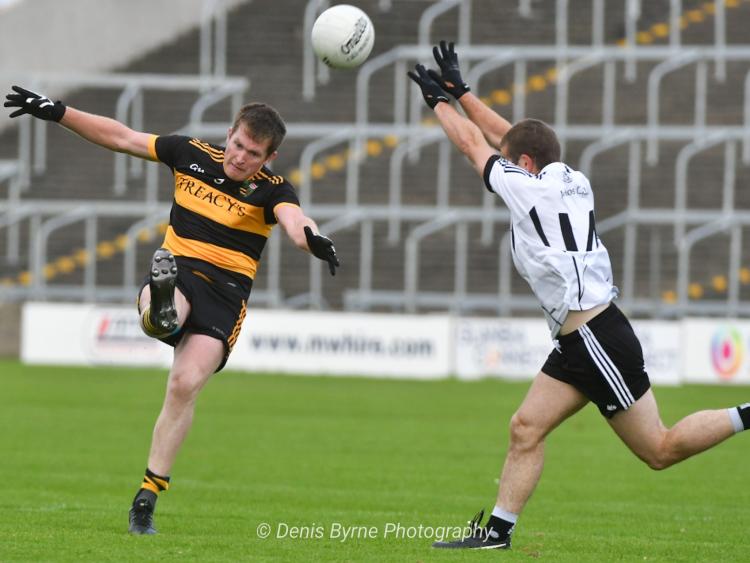 The Heath are the first of the round three teams through to the quarter finals of the Laois Senior football championship after they disposed of Arles Killeen by three points on Saturday evening.

It was helter skelter stuff as they came through with a deserved but hard fought win.

The Heath were aided by the strong breeze in the opening half and they set out their stall early with two points inside the opening five minutes through Conor Booth (free) and a Dylan Kavanagh effort when he decided to put the ball over the bar despite Arles Killeen goalkeeper Michael Leigh being off his line.

Paul Kingston kicked the opening score for Killeen on six minutes but The Heath were looking lively up front and Robbie Ging landed his first of the day to put them 0-3 to 0-1 in front on seven minutes.

Donal Kingston opened his account shortly after but three scores in a row for the The Heath pushed them out to 0-6 to 0-2 with Conor Booth landing two frees and Daithi Carroll also registering a score.

Jason Enright pegged one back for Killeen from a free but The Heath finished the half strong and points from Dylan Kavanagh and a super solo effort from James Phelan left them 0-8 to 0-3 in front at half time.

Arles Killeen sent out a strong signal at the start of the second half with Donal Kingston pointing with the first attack while Jason Enright added a well taken free minutes later to cut the gap to three points.

Booth and Enright exchanged frees while The Heath lost centre back Ciaran Booth to injury as the game entered the final 20 minutes.

With the game in the melting pot, The Heath began to pull clear again and by the time the second water break came around, they were 0-12 to 0-6 in front with Robbie Ging helping himself to a brace of scores.

Killeen were not done yet though and with the first play after the water break, Donal Kingston caught a high ball, got by Denis Booth and sent a cracking shot to the net to leave it 0-12 to 1-6 with 49 minutes on the clock.

The Heath were on the ropes now and a free from Enright and a wonder score from Donie Brennan left just a point between them at 0-12 to 1-8.

The wheels then came off the Killeen challenge with Shane Julian shown a straight red card with a minute of normal time to go.

Paul Kingston and Enright did add scores for Killeen but Neil Keane also chipped in with one for The Heath as they led 0-15 to 1-10 with time almost up.

There was still time for Jimmy Nerney to fire over a rousing score for The Heath as they won out by three points in the end and advanced to the quarter finals.