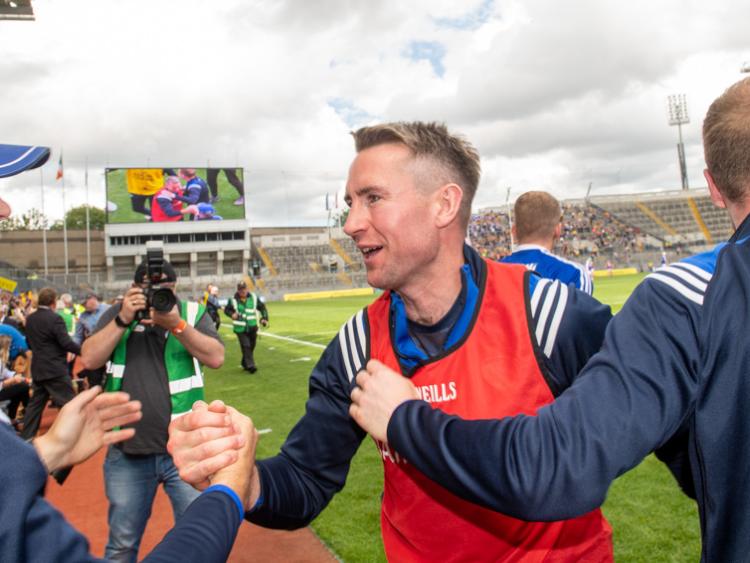 Eddie Brennan was been one of the more vocal managers and pundits in recent months surrounding Covid-19 and the impact and potential sidelining of the GAA.

Indeed, there has been no shortage of opinions from far and wide but as of now, five days out from a Leinster championship tussle with Dublin, the former Kilkenny star has only one thing on his mind.
The game is going ahead and that particular sideshow is put to bed.

Since taking over as manager of the Laois senior hurling team at the start of 2019, he was brought a huge amount to the table but now his job is to try and top 2019, a year that saw them win the Joe McDonagh cup and get back in the Leinster championship, beat Dublin in the championship and have a good cut off the eventual All Ireland champions, Tipperary.

His Laois charges now take on Dublin in the first round of the Leinster championship on Saturday night in Croke Park and he is excited by the challenge ahead.

As of now, Monday evening, the game is going ahead. You have been vocal in recent weeks about all things Covid but at this stage now, focus is fully on the game?
“As of two weeks ago, it was all systems go for us. The local club scene came to a shuddeing halt and that was disappointing in a lot of regards. Obviously there was a reason for it but it was disappoitning that the County finals didn't get played.

“It would have meant that everything would have been done and dusted except for the Inter County. But look, we probably benefited from it as we had the guys in with us for more sessions but it has been great in terms of there is no distractions.

“We have had a clear run of things for the last few weeks and we are looking forward to Saturday night. There is a massive challenge ahead but it is good that it is going ahead.

“There is an ever changing environment out there but the priority has to be the players and they are the ones providing the entertainment for everyone.

"Once there are good protocols in place and the guys are happy and reassured, that is as much as can be done.”

You have only had the players back fully with you for a few weeks. I presume there is a balance to be met between getting as much work into the lads as possible while also being careful not to overload them?
“A lot of things have come out of 2020 but one of the positive things was that club teams were going flat out for seven or eight weeks before we got them back in with the County. We were getting them with a decent base. Lads should be in good order and they were training with their clubs since the middle of July.

“There is obviously a bit of a diversity in how hard clubs are training but at the same time you have your panel coming in off the back of club championship and it is just a case of getting them up an extra gear.

"My philosophy would be never to overload players. I think freshness is everything. Obviously there is work there to be done getting the speed of touch and the speed out thought up to another level.

“If there is one positive that we can take from it all is that players are coming in good order and as long as there are no major injuries, three or four weeks should get them back up to where they need to be.”

Something I found interesting was that players were going in and training with the County while their clubs were still in the championship. There must have been a good relationship there with the clubs for that to happen?
“Earlier in the year, we kept pushing our plans back. At one stage we thought that we would be going again with the County in June or July but it kept getting pushed back.

“Even in August, I was looking forward to something that might work down the tracks. We sat down and we got the players training schedules (club) and we felt that we needed to be working as well (County).

“We flagegd it with the players and told it to bring it back to the club managers. We went with nights that the vast majority of clubs weren't training.

“It was just skills work. They came in, did an hours skill and touch work. We gave a commitment that we wouldn't be flogging the players or running them. We just wanted to see where their touch was at and to work on a little bit of tactical stuff.

“I think we got it right. That should be the way. Any time that there is a club and county issue, we should be sitting down and figuring it out. The last thing you want to do is get heavy handed with anyone. Once you are up front things, it will always work.”

The football code have a few rounds of the league to play before their championship. Would you have liked a few competitive games before facing into playing Dublin?
“I think you need a couple of games to get up to a high standard. I am looking at the weather forecast for the week and it is probably going to change the dynamic of hurling and the tactical approach.

"We have to consider a lot more things. We played a game a few weeks ago and it was just a case of trying to get lads up to the pace of it and I think it did just that. Nothing prepares you more for championship battle like a couple of tough games.

“It would have been nice to have them but it is what it is. We are in the home straight in terms of our preparation and it is all in the heads now.”

Mark Kavanagh is a big doubt for you on Saturday. He would be a big loss considering the form he was in with the club. What's the latest with him?
“It looks highly unlikely but you keep the door open for everybody. The physios have done a good bit of work with him and we just have to wait and see.

“He is nowhere near full match fitness and that's the concern really. He has had a couple of big injuries but we had a situation with him before in the run up to the McDonagh final and it didn't bother Mark too much but we will just have to wait and see.

“One way or another, we will have 26 lads ready to go on Saturday evening. You would love your full compliment but we will just have to wait and see.

“We have the usual bangs and belts but at this stage it's just if something flares up on the illness front. The Covid situation could have a big bearing on things but it is also the time of year when lads pick up colds and flu so you are just saying to lads to keep themselves right this week and wrap up for the few nights in training.

“This week is all about getting the housekeeping right. The heavy lifting is done and we are looking forward to it now.”

Laois will have a target on their back this year having turned Dublin over last year. No doubt you can expect a big challenge from the Dubs?
“Earlier in the year the lads were looking forward to having a Leinster championship with four games but we just looking forward to Saturday now.

“It is not about being a flash in the pan team. We want to prove that we are good enough to compete with the likes of Dublin of this world.

“From my experience, when you get hurt or beaten in a championship, you get chances to exercise that ghost and they will be chomping at the bit and we have to be ready to meet that.”

You would have to feel for managers in their first year of a job given the Covid-19 crisis. Having last year under your belt has surely served you well?
“The more you get to know lads and their characters and how that manifests on the pitch is significant. That is an advantage. You have to get the balance of experience and throwing in other lads.

“It this had to have been my first year, you might have thrown your hands up and said can't deal with this but for the year that's in it, it is the same for everyone. We won't forget the year 2020 for a long, long time.”