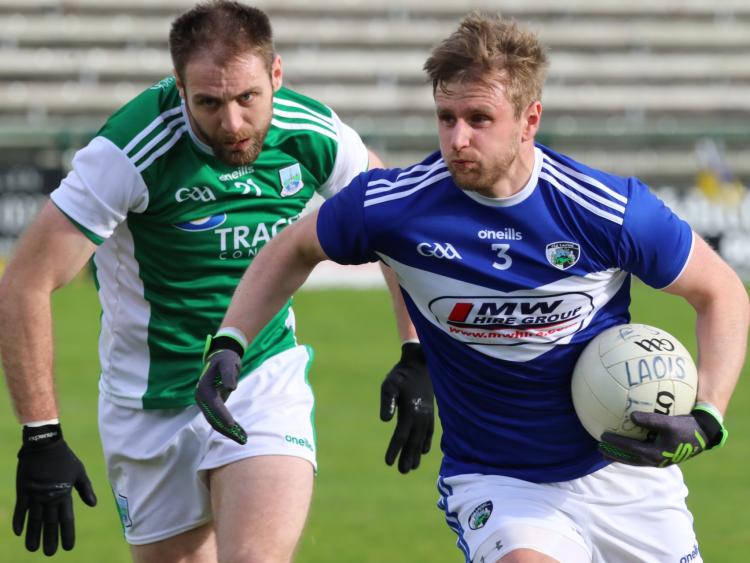 Laois retained their Division Two status for 2021 in the most dramatic and unlikely of circumstances this afternoon in Enniskillen, as a team that scored three points in the first 35 minutes of action (while playing with the wind) and then added six more points by the 68th minute, fired in 3-3 in the closing minutes to turn what looked like a dismal defeat into a most remarkable victory.

Simply put, for 35 minutes Laois were dismal, thoroughly outclassed by Fermanagh. For the first half hour of the second half, they were little better. But crucially, they never shipped too much damage, and left themselves in a position to deliver a most unexpected finale.

Certainly, luck was not on their side – time and again. John O’Loughlin was forced off with a first half injury, believed to be a hamstring, and he was joined on the sideline by his midfield colleague Kieran Lillis following a harsh red card for the Portlaoise man in the 64th minute.

Two Fermanagh second half points were hotly disputed by Laois defenders, who felt wide balls was the correct call, while Niall Corbet got no luck at all when his block on Ciarán Corrigan fell to his brother Tomás Corrigan to side-foot the ball into the net from 12 metres out.

And yet, such was the lethargy of much of the Laois play, that Fermanagh’s five-point lead going into the closing stages didn’t flatter the Erne County. Ryan McMenamin’s side aren’t easy to watch, but they controlled the ball for long periods, aided by some poor distribution from the Laois side. Long ball after long ball into the full forward line went astray, and every time Fermanagh took possession, they were patient and worked the ball through the hands, usually generating some type of chance at the end of it.

Despite playing with the wind in the opening half, Laois turned around 0-5 to 0-3 behind – having added just two wides and one shot off the post to their three-point tally. Fermanagh, in contrast, had 13 chances, and when Daragh McGurn opened the scoring for them after half time, they looked well poised.

Laois then enjoyed a mini-revival and some excellent points from substitutes Eoin Buggie and Brian Daly helped them to draw level at 0-7 each, but they lapsed again and conceded the next three points, before Corrigan’s goal straight after the water-break seemed to condemn Laois to the drop.

Points from Gary Walsh and Evan O’Carroll stemmed the bleeding before Lillis’ high tackle on Danny Teague, who looked like he ducked into the hit, left the O’Moore County with just 14 men on the field.

A lifeline was needed, and it came when Kane Connor committed a foot block on Paul Kingston, with Gary Walsh slotting home the penalty.

A second green flag followed from the Stradbally man after Evan O’Carroll turned over the Fermanagh keeper, and with Fermanagh chasing the game, a hard-dirty ball win from Shane Bolger set in train an attack that ended with Kingston hammering the ball inside the near post from close range.

A shell-shocked Fermanagh could only watch as Walsh and Michael Keogh added further points, though the real shell shock would have been felt across the border in Cavan, who will now make the drop to Division Three instead of Laois.