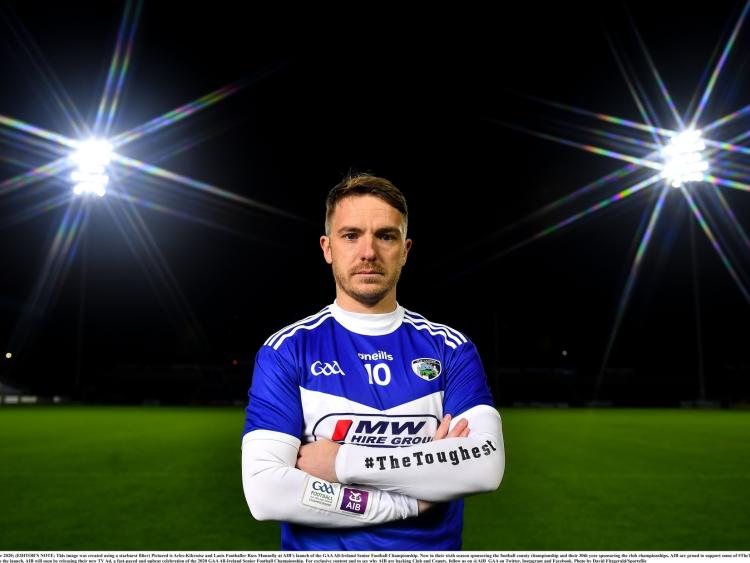 Ross Munnelly has stood the test of time and he is once again fit and available to Laois this weekend as they open up their Leinster football championship campaign with an away trip to Longford.

Munnelly saw game time against Westmeath in the league a couple of weeks back but didn't see action in their remarkable comeback win over Fermanagh two weekends ago.

He is very much still part of the panel and is embarking on his 18th season of Inter County championship.

Munnelly was speaking this week as AIB launched their championship sponsorship campaign and he is still as enthusiastic as ever to pull on the blue and white of Laois.

“It’s a funny one, because I don’t like to dwell on how long I have been playing,” he says. “You can get a little caught up in that. Being honest, I’m always looking at ways I can reinvent myself even further, something that these younger players are doing that maybe I need to bring to my game, and so on.

“From when I first started, I always wanted to judge myself on consistency, and when you play for a smaller county like Laois, it’s not like professional sports where players move to different places, stronger or weaker clubs, and maybe money dictates. And the great thing about the GAA is that you’re representing your own community, county club and family, and while the game in some ways changes, in many ways it stays the same too, so I like to judge myself on playing to that consistency.

Munnelly hasn't the time or luxury to be dwelling on a career spent in blue and white. He is not on the panel to make up the numbers and will be as keen as any of the 26 to get on the field at the weekend.

Given the years in the legs, he has seen a lot but insists that he is always learning.

“The fact I’m still playing, and all these younger players are coming through, keeps me in reality too. I don’t need to look any further than my own Laois dressing room, and at any time in the last number of years I could have been sitting beside a guy who was doing his Leaving Cert, or players here in DCU.

“So I’m very much a believer in youth, also being able to mentor some of these players, but that works both ways, there’s a reverse sharing of knowledge, and I can learn from their perspective too. But it’s fantastic from my perspective, and I’m enjoying every minute of it.”

Speaking on the great Laois escape when they held on to their Division 2 league status two weeks ago, the forward who works at the alumni office at DCU, while also studying for Executive MBA, explains how never believed they were a beaten docket.

“It never had the look of a game that we were completely dead and buried, even down to 14 men. But probably something we deserved in the overall balance of the league, I think we richly deserved to stay in Division 2. That was a massive goal for us from the start of the year, and we have another opportunity now to represent our county.

A Leinster title in 2003, an All Star nomination in 2006 and three International rules panels are just some of his highlights but he is not ruling out more big memories this year.

“It’s interesting ramping up to play this time of year, I think we’d all prefer of the pitches were a bit harder. It’s also about managing the load, maybe training as hard as I can, but maybe for a shorter period of time.

“Given the times we’re in, the intercounty season is providing something for people to look forward to at the weekend, and as players that’s one of our responsibilities. It also feels like all bets are off again, it’s back to the old format from before even I was playing.”