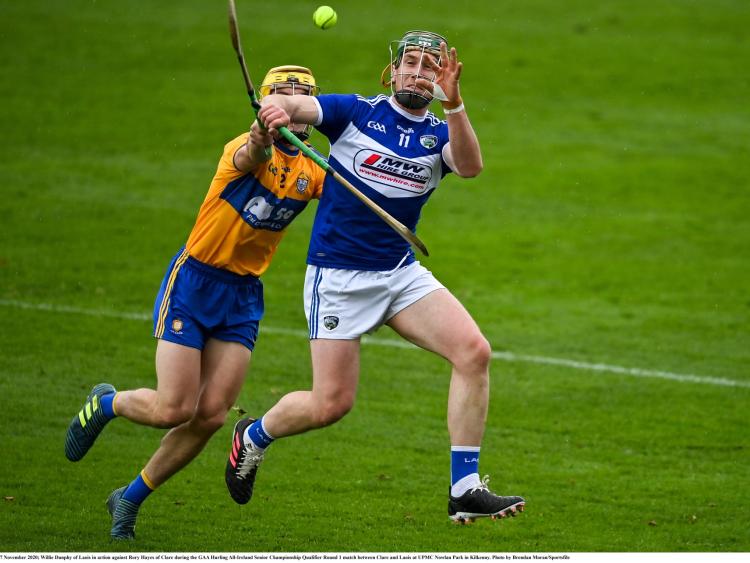 Willie Dunphy in action against Clare

Laois were left heartbroken in Nowlan Park on Saturday as a rousing second half comeback fell short by the minimum as they came within a point of bringing Clare to extra time.

Trailing by seven at the break and by seven again with 15 minutes to go, they fought with every inch of their lives and in the end fell just short and are now out of the championship.

A late goal from Aaron Dunphy meant the game would go to the wire and Clare would have been relieved to hear the full time whistle and get out with their championship hopes still intact.

Clare had the first score of the game after just 30 seconds when Seadna Morey fired over from inside his own half while Captain David McInerney quickly doubled their lead.

Laois got off the mark from courtesy of Aaron Dunphy and the Borris-Kilcotton man would go on to have a big impact in the opening stages.

Clare went 0-3 to 0-1 in front but in the fourth minute of the game, Laois struck for goal. Dunphy made the hard yards through the middle and when the ball broke to Ross King, he rattled the net with a first time stroke to make it 1-1 to 0-3.

Mark Kavanagh got his first of the day to put them two up and the signs were good. Tony Kelly wasn’t at his brilliant best in the opening half but he still pucked 10 points and his first two were in a minute of each other as he drew the sides’ level.

Points were traded but the last 15 minutes in the opening half saw Clare begin to pull away. Kelly landed two more while wing forward Colin Guilfoyle also fired over for a Clare side who were also missing their fair share of chances.

Two more Tony Kelly frees made it 0-13 to 1-5 after 30 minutes but soon after, the Banner County were reduced to 14 men.

Mark Kavanagh and David McInerney tussled off the ball and with McInerney appearing to strike Kavanagh in the chest, referee Thomas Walsh sent the Clare Captain to the line.

That didn’t stop Clare though and while Mark Kavanagh did cut over a sublime sideline cut, Clare themselves also added three more points after the sending off to put them 0-16 to 1-6 up at half time.

Laois might have looked in trouble at half time they gave themselves some tonic in the early stages of the second half.

James Keyes burst through and sent a rocket to the net just a minute after the restart. Mark Kavanagh and a super score from play along with a free while Paddy Purcell left it 0-17 to 2-9 and only a two point game after 41 minutes.

The following 10 minutes saw a more potent Clare come to the fore. Stephen Maher pointed for Laois but it was in the middle of six Clare white flags with Kelly and Cathal Malone to the fore as they led 0-23 to 2-10 just before the water break.

Paddy Purcell burst through and was headed for goals before being hauled down but it was only a free that was given and Kavanagh tapped it over to make to 0-23 to 2-11 at the water break.

Laois were battling hard but they needed another goal or two to catch up with Clare. They went toe to toe with them in the closing 18 minutes or so but never made up too much ground.

Ryan Taylor and James Keyes exchanged scores while Willie Dunphy brought it back to a five point game with five minutes to play.

Then with three minutes to go, Laois got their third goal when Aaron Dunphy fired low through a load of bodies to make it 0-26 to 3-14.

Rory Hayes and Padraig Delaney traded scores but with injury time being played out, Laois trailed by just three points.

Paddy Purcell landed his second of the game and Mark Kavanagh slapped over a free to make it a one point game with 15 second or so of injury time to play.

Clare won the resulting puck out and as Laois were building from their full back line again, the full time whistle blew and Laois were left devastated by a one point defeat.