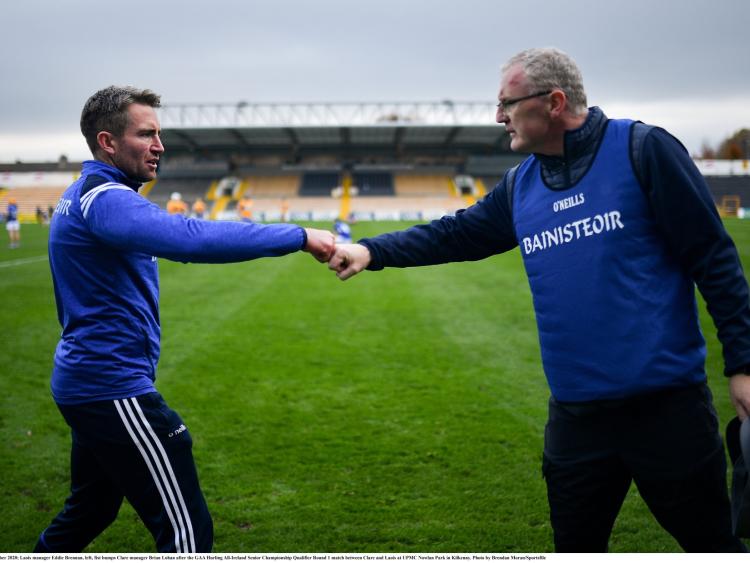 Eddie Brennan and Brian Lohan greet each other in Nowlan Park on Saturday last.

Laois manager Eddie Brennan couldn’t hide his disappointment after their agonising one point defeat at the hands of Clare on Saturday that knocked them out of the Senior hurling championship.

Laois came back from being seven points down at half time to almost pull off a miraculous win against a Clare side that played just over half the game with 14 men.

In the end, it was the basic errors that frustrated the former Kilkenny forward and he pointed to these little margins and errors that he feels separates the top teams from the chasing pack.

“It’s a killer. Clare didn’t win that match, we gave it to them. That’s not being critical of the lads; we had too many unforced errors. From that first water break to half time really hurt us, I think we got two points in that time. We had a gap without scoring and we ultimately, literally, handed the ball to Clare at times.

“We had 42 turnovers in the first half, which is phenomenal at this level, and then we handed the ball straight back to Clare. You can’t do that.”

Laois were well able to mix it with Clare when it came to creating and scoring but they just found their scores harder to come by while Clare were afforded a host of handy scoring chances.

“That’s the difference. We created chances, we had another goal chance there, but equally Enda brought off two good saves in the first half when it looked as if there was walk in goals. But we had, I think, three frees that we drove wide. They’re the little margins that make a difference on a day like today. If you’re going to pull the rug from underneath a top tier team in a championship match like that, that’s what you need”, explained Brennan.

Laois also fell foul of some crucial refereeing decisions. A couple of high and dangerous challenges from Clare players went unpunished while Laois also had a decent penalty shout in the second half before it was deemed Paddy Purcell was fouled outside the box.

“But something I’ve spoken about already, and it’s a side issue – I love a manly game, I love a good, hard-hitting contest, but I saw two decisions out there that were blatant head hits. One of them got a yellow, the other got nothing. In terms of officiating, we’re either going to enforce that rule or we’re not. One of them happened right in front of the official on the sideline with us.

“If you can throw the handle of the hurl up into a lad’s face, in front of a referee and a linesman, and that’s only going to get a yellow card, then what are we doing? It’s just one little question I’d have. Paddy Purcell, a lad lifted his shoulder up into Paddy’s head going down the sideline, and I’m just going, okay.

“I’ve no doubt there were decisions we got, where Clare were frustrated too, and I don’t know what went on in the first half. David McInerney, he’s possibly in trouble the next day and you hate seeing that. If it’s something wrong, so be it.

“I don’t mind not getting frees, that’s the rub of the game. Sometimes you get those decisions and sometimes not. I just think we done enough to get something out of the match, but we didn’t. I’m bitterly disappointed, and I’m not trying to blame something. But it’s a point that I think is important. But in terms of where we’re at, where we need to be, the extra little bits of work that players do, that’s where that pays off.”

Meanwhile Brennan wasn’t sure what the future holds for him and he will sit down with the County Board to see what their ambitions are in terms of Laois hurling.

“Don’t know, we’ll have to wait and see. I took on this job for two years with a view to thinking about a third, so we’ll have to sit back and re-assess that. But like I said there, I think there’s a lot of people involved, Laois hurling is either going somewhere and we have to look at who’s going to do that. I’d be happy with the job we’ve done and I’m very proud of the players. But if you’re looking at the big teams, where they’re at and the support they’re getting, you have to support your team and look at how you’re going to grow them.

“That’s not pointing the finger at anyone, that’s just an objective question that needs to be thrown out there.”