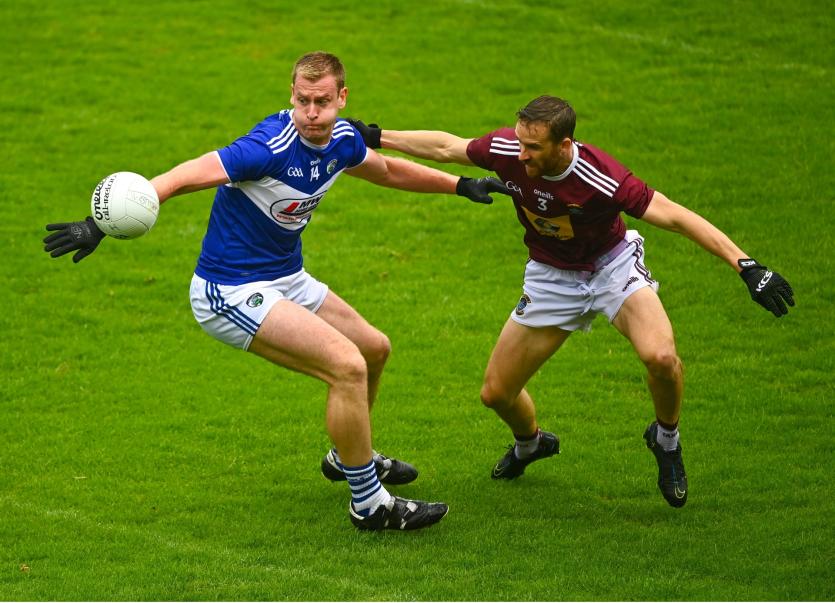 Laois have crashed out of the Leinster football championship after a comprehensive defeat at the hands of Westmeath. Played in Tullamore on Sunday, Laois were right in the game for 45 minutes but a disastrous final 25 minutes saw their challenge fall apart.

Westmeath grabbed their second goal of the game through David Lynch with 16 minutes to play to make it a nine point game while two minutes later, Laois Captain Kieran Lillis was sent off after picking up two yellow cards and their game was up at that stage.

Mike Quirke's men had led by a point at half time and were right in the game early in the second half but they suffered a big collapse in the end.

Laois got the opening score of the game from a Donie Kingston free in the second minute but his opnposite number at the other end, John Heslin replied with a free of his own on six minutes to level the game.

Laois responded well and in the next minute, they rattled the net. Evan O'Carroll cut in from the side and drove a low shot past Westmeath keeper Jason Daly.

You would have thought this would help power on but it was the opposite. Westmeath really got into the groove with centre forward Ger Egan and corner forward Ronan O'Toole scoring at will. A point from Heslin and Ger Egan brought it back to a one point on eight minutes  but a well taken score from a mark off the boot of Colm Murphy gave Laois a bit of breathing room.

From the 10th minute to the first half water break, Westmeath kicked five unanswered scores with one as good as the other. Ger Egan brought his tally to three points with Ronan O'Toole also kicking a brace to give them a 0-7 to 1-2 lead at the water break.

It should have been more but Lorcan Daly missed an open goal as his soccer style shot from close range skipped wide of the post.

Laois went 10 minutes without a score before Donie Kingston kicked his second free of the game on 20 minutes before the Arles Killeen man added another on 25 minutes to level the game at 0-7 to 1-4.

Laois had a powerful finish to the half despite falling two behind on 28 minutes. With an immediate response, Eoin Lowry and Donie Kingston kicked over in rapid succession to level the game and a minute later, Kingston kicked another free to edge them in front by one.

That free also saw Westmeath corner back Jamie Gonoud pick up a black card and 10 minutes in the sin bin for his cynical foul on Colm Murphy.

John Heslin did level the game but but Laois had the last say of the half with Colm Murphy clipping over a lovely effort from 35 yards to leave Laois leading 1-8 to 0-10 at half time.

John Heslin levelled three minutes after the restart and with Jamie Gonoud barely back on the field after his black card, he played a big role in Westmeath finding the net on 41 minutes. He took off up the field with the ball, laid off to James Dolan who played in Denis Corroon to strike low to the back of the net.

Westmeath now led 1-11 to 1-8 before the teams went through a five minute spell of scoring at will. Lorcan Dolan landed two exquisite scores for Westmeath but at the other end, Donie Kingston replied while Colm Murphy fisted an effort over the bar as Westmeath led 1-13 to 1-10 after 47 minutes.

Westmeath began to pull away at this juncture and by the second water break, they led by five with Ger Egan kicking his fourth and fifth of the day to pull them clear.

The game was put to bed with 15 minutes to play as in the space of a couple of minutes, Westmeath grabbed their second goal and Laois were down to 14 men. David Lynch took a pass from Lorcan Dolan to find the net while two minutes later, Laois Captain Kieran Lillis was given his marching orders after picking up a second yellow card.

Westmeath continued to rack up the scores in the closing stages with subs Tommy McDaniel and Darren Giles opening their accounts while Lorcan Dolan notched their third goal with two minutes left.