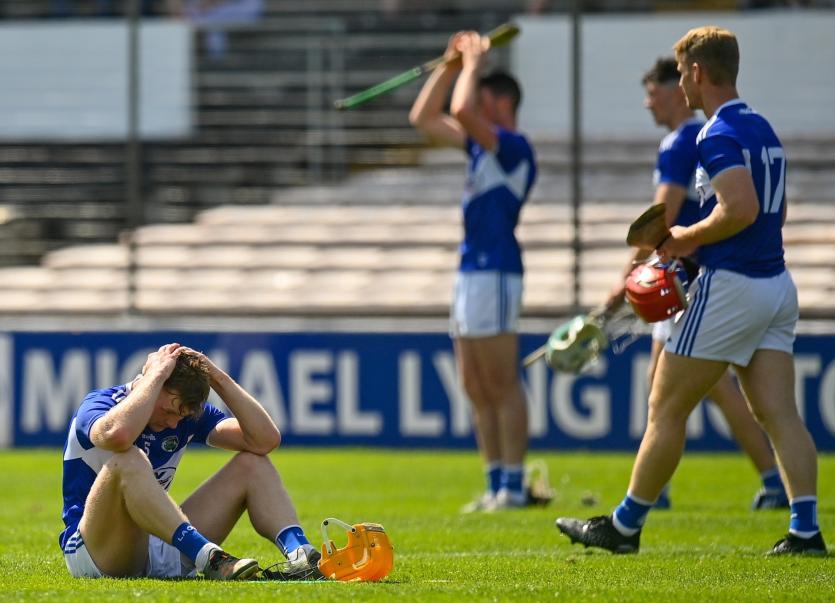 For the second year in a row it was to be close, but not quite close enough for the Laois hurlers at UPMC Nowlan Park in a hurling qualifier against good Munster opposition. Last year Clare edged out Eddie Brennan’s men in a heartbreaking tight finish, and this time around it was Waterford who came up with the crucial scores to snatch a win – goals from Patrick Curran and Stephen Bennett in the closing stages on this occasion.

It took time for the cracks to appear, as the contest followed expected lines for the first half. Waterford were athletic and cohesive in their hurling, picking off three points in the first two minutes (two from Patrick Curran) and doing all their hurling on the front foot.

Laois settled into the contest after that and cut the gap back to a single point, 0-4 to 0-3, but they didn’t offer anything like the same range of scoring threat. On the half hour mark it was 1-13 to 0-8, but Laois had just two scorers from play, (Paddy Purcell and Podge Delaney), while Waterford had 12 different scorers.

In part, this was because it took time for the Laois management to find the right combination up front, with Ross King, Willie Dunphy and Stephen Maher all completely out of the game.

Kevin Moran was the goalscorer for the Déise, having benefited from a huge stroke of luck as his close range shot was deflected off Donnchadh Hartnett and spun into the net past Enda Rowland.

Calum Lyons, Austin Gleeson and Jack Fagan fired over good scores from distance, Neil Montgomery could have had a goal but he fired his close range chance over the bar from 13 metres out, and Hartnettt again put his body on the line, this time successfully, to parry a close range shot from Stephen Bennett.

Laois found a decent spell again to make it 1-16 to 0-11 at the interval and it was clear that in Paddy Purcell, they had the best player on the field – but there were no red flags waving for Déise supporters at that stage.

Even in the five minutes after half time, it looked like simple stuff. Waterford’s radar was off, as they made a start on their second half tally of 11 wides, but Laois still found it hard to win good possession close to goal. Then Purcell burst past his man to place the sliothar into the bottom corner of the Waterford net after 41 minutes, and instead of Waterford reacting to the setback, Laois were roused further. PJ Scully continued to find the posts with every dead ball chance, including a tight angle sideline, and their supporters really exploded once Ciarán Comerford found the net with the last puck before the water break, capitalising from close range after Charles Dwyer made the high catch and layoff.

Again, it took time for Waterford to respond and Laois still led up into the 63rd minute, when Austin Gleeson rose highest to claim a long clearance and once he found Patrick Curran, the Dungarvan man was left with a simple finish.

PJ Scully pointed another free to cut the gap to a point and while Waterford now were visibly stronger and fitter, the wides kept coming, so it wasn’t until Stephen Bennett found the net from a tight angle deep into stoppage time that Laois’ exit from the championship was confirmed, and the ink dried on another story of what might have been.