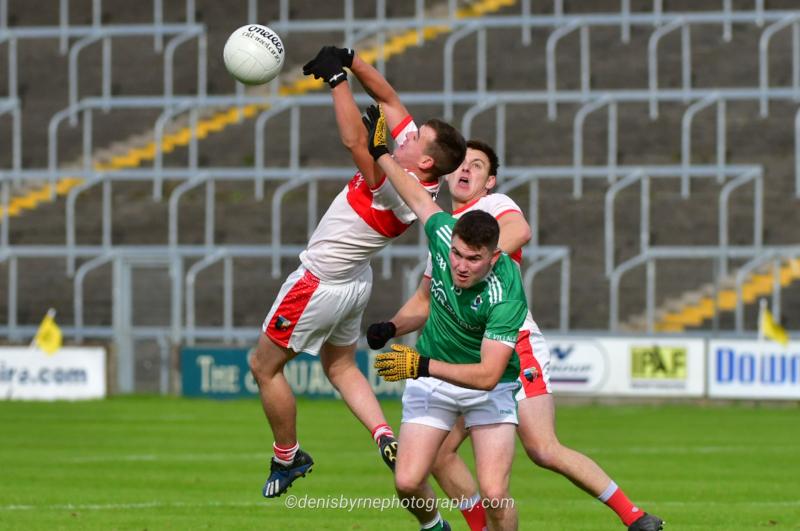 Based off of both Emo and Rosenallis' respective displays against O'Dempsey's in the opening rounds of the Laois Senior Football Championship, many would have given Rosenallis a right good chance of defeating Emo and going through to the quarter-finals.

However, Emo looked like a completely different team to the team that showed up against O'Dempsey's and Emo in the earlier rounds. Their pace and power was seriously impressive, as they looked more like the team that had dethroned Portlaoise last year.

Rosenallis had a lot of possession in the opening five minutes but failed to make it count, as they fired three wides. Emo opened the scoring through David Gorman, who split the posts.

Then the first goal of the game arrived, as Emo wing-back Padraig Kirwan went on one of his trademark runs. Kirwan received the ball at pace and skilfully flicked it over the Rosenallis defender to himself, before burying it into the bottom left corner of the net.

Rosenallis took thirteen minutes to get on the scoresheet, but Eoin Dunne did deliver a stylish point off the outside of his left boot to open their account.

Paddy Hosey grabbed the last score of the quarter from a close range free, as Emo led 1-2 to 0-1 during the water break. Referee Joe Brennan had issued three yellow cards during the opening period, with John Maher and Ruaidhri C Fennell booked for Rosenallis, while Darren Strong was carded for Emo.

Eoin Dunne landed a free for Rosenallis after the water break ended to reduce the difference back to just the goal. Emo corner-back responded by charging up the field and kicking a score high over the bar, as the Emo backs were attacking at pace constantly.

Rosenallis had a goal opportunity after that. Donnagh Callaly's shot was short
but Niall Gorman spilled it and it fell to Brian Fitzpatrick, who's shot was in tuirn well smothered by Gorman. Paddy Keating had another chance but his attempt came back off the upright.

Emo punished Rosenallis' lack of ruthlessness by tacking on two more points. Paddy Hosey did brilliantly to make space when there appeared to very little and register a point, then the flying Padraig Kirwan added a point to his earlier goal.

Brian Fitzpatrick did curl over a Rosenallis score but they continued to be guilty of kicking away more wides, as three more went wayward. Eoin Dunne took responsibility just before half-time to kick one over the bar off his weaker right foot, but Rosenallis still trailed 0-4 to 1-5 at the interval.

Dunne cut the gap back to the goal once more upon the restart for Rosenallis, as he swung over a free. However, that deficit was two goals seconds later.

Emo's centre-forward Nigel Murphy picked out the run of his full-forward, Jack Owens, and he slipped it to Hosey inside who calmly finished low into the net.

Rosenallis replied in the 38th minute after they withheld some more Emo pressure thanks to some strong defending from full-back Ruaidhri C Fennell. Paddy Keating left five between them, but Emo could have easily had another goal a minute later.

Padraig Kirwan's blistering speed was causing havoc for the Rosenallis rearguard, and he cut in from the wing again but this time his effort drifted wide of the goalposts.

Rosenallis almost had a goal themselves down the other end, as Paddy Keating launched a high ball in and Brian Fitzpatrick did brilliantly to field under pressure. Fitzpatrick's shot was straight at Niall Gorman in the Emo net though.

Emo did grab goal number three in the 44th minute. Jack Owens received the ball in the square and turned on a sixpence to smash the ball into the top right corner.

Rosenallis went in desperate search of goals to get them back in the game. Dunne had a half chance but his effort was well saved by Gorman in the Emo goals.

Rosenallis substitute Charlie Friel did pop over two close range frees, and Dunne also converted another, but they ultimately came up short.