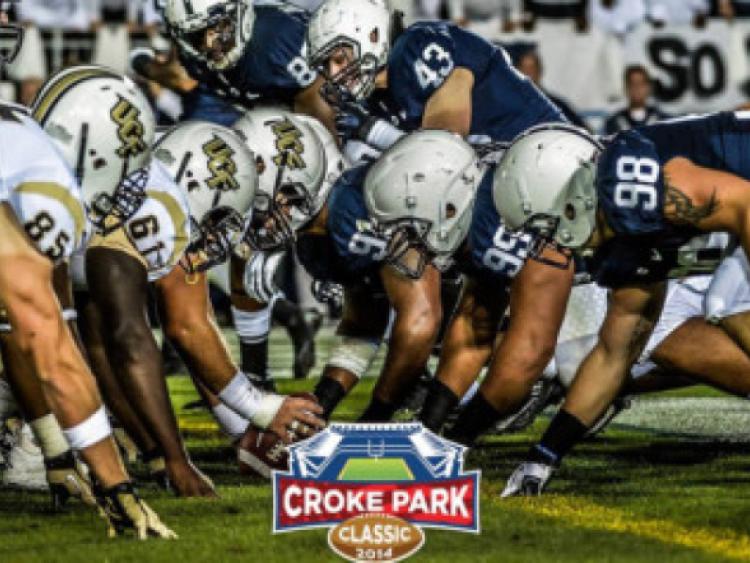 With just over three weeks to the Croke Park Classic, an exciting programme of events around the American College football game between Penn State and the University of Central Florida (UCF) has been announced by the Croke Park Stadium Director, Peter McKenna and Lord Mayor of Dublin, Christy Burke.

With just over three weeks to the Croke Park Classic, an exciting programme of events around the American College football game between Penn State and the University of Central Florida (UCF) has been announced by the Croke Park Stadium Director, Peter McKenna and Lord Mayor of Dublin, Christy Burke.

The game will be played on Saturday 30th August but events surrounding the game have already started in the city.

With over 20,000 overseas tourists expected for the game, the majority travelling from North America, the economy is set to benefit to the tune of an estimated €30 million from the event.

Lord Mayor of Dublin, Christy Burke said; “ The economic benefit from the Croke Park Classic and the various social, business and entertainment events surrounding the game are hugely significant to the country. It’s a wonderful platform to showcase what Ireland has to offer to the many tourists who are over for the game and all those watching on television around the world. I am certainly looking forward to what promises to be an exciting build up followed by an superb spectacle in Croke Park.

Croke Park Stadium Director, Peter McKenna said, We have made a substantial investment to bring this event to the city and establish Dublin as the European Home of American College Football and we’re delighted to announce details of a series of events taking place in the run up to the game. These include the American Ireland Business Forum, The UNESCO Symposium on Youth Civil Engagement and Leadership through Sport, the GIFT high school games in UCD and a host of cross cultural and entertainment events in the Croke Park Classic Fanzone in Temple Bar. We’re delighted Dublin has embraced the event and hope that a fantastic welcome will be extended to all those travelling from overseas and around the country.”

Temple Bar will become a Croke Park Classic fanzone over the weekend from Thursday August 28th to Sunday August 31st providing travelling fans and locals with an area to mix and mingle and get behind their chosen teams. Both teams Pep Rallies will be hosted there on Friday 29th and the pre-game Tailgate Party will also take place here on the morning of Saturday 30th. Dublin Bus will offer a complimentary shuttle services from Temple Bar to Croke Park to take fans from the Tailgate to the game.

The Croke Park Classic game spectacle will be a full days entertainment for all the family featuring parachute jumps, the Penn State marching band, Extreme Rhythm, The Dublin Gospel Choir, cheerleaders, team mascots and the Super 11’s. Tickets including a special August Family Ticket Offer are still available for the event.

UCF and Penn State will be playing for the Dan Rooney Trophy and there is a special coach’s Waterford Crystal helmet for the winning coach.

Tickets for the Croke Park Classic are on sale though ticketmaster.ie and tickets.ie. For further information visit www.crokeparkclassic.ie