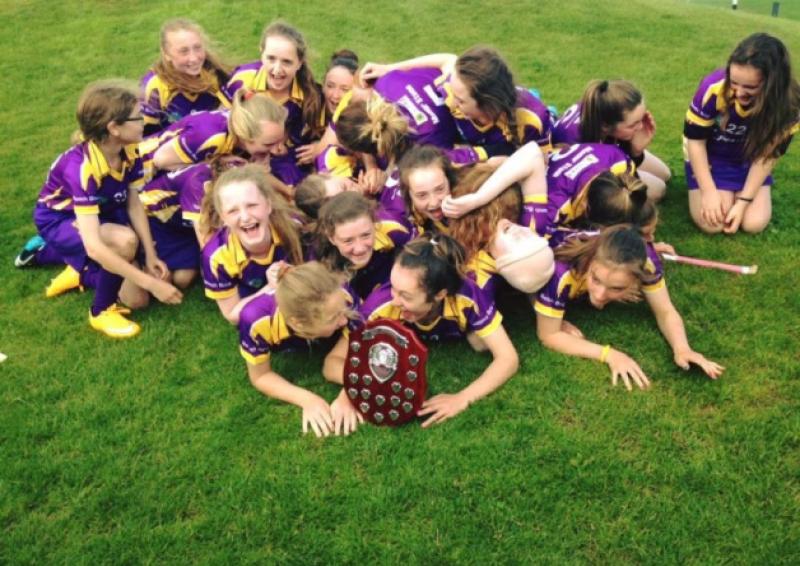 St Brigid’s Camogie Club were among the winners at the Feile na nGael hosted in Ulster from June 19 to 21. The team was based in Castledawson Co Derry and had a weekend they will always remember.

St Brigid’s Camogie Club were among the winners at the Feile na nGael hosted in Ulster from June 19 to 21. The team was based in Castledawson Co Derry and had a weekend they will always remember.

On Friday evening, St Brigid’s played two games, the first against St Dominic’s from Roscommon which they won 2-7 to 0-1. Immediately after this game they faced Ballinderry from Derry and had another comprehensive win 8-3 to 1-0.

On Saturday, morning there was an early start when St Brigid’s took on their host club Castledawson at 10.30am and it was another encouraging win for the Laois girls on a scoreline of St Brigid’s 6-11 to St Malachy’s 0-0. St Brigid’s scorers were Shona Jones (1-2), Jessie Quinlan (1-2) and Denise Healy (1-0), Emma Dunphy (1-3), Catherine Glabraith (2-0) with Grace Hayes, Clodagh Tynan, Aoife Carroll and Kiera Corcoran all adding points.

St Brigid’s took on O’Donovan Rossa’s from Magherafelt on Saturday afternoon in the quarter-final. They gave an exhibition of camogie as they kept another team scoreless and clocked up 8-5 themselves.

Catherine Galbraith opened the scoring with a goal and quickly followed with a point. Alana Tynan then hit home for goal followed by a Clodagh Tynan free which dropped into the net.

Galbraith hit home for her second goal of the half and just before half time Jamie Houlihan found the net.

In the second half Emma Dunphy opened the scoring with a point and Ava Meagher scored St Brigid’s sixth goal of the game. Catherine Galbraith added another point from play and Emma Dunphy was on the score sheet again with a goal. The last goal of the game came from Zoe Daly and they finished up with two points from Shona Jones and Zoe Daly.

In the semi-final they faced Bray Emmets from Wicklow. The semi-final was played on Sunday morning in the Tyrone Centre of Excellence in Garvaghey.

Weather conditions were poor with strong winds and rain but St Brigid’s were not phased. The St Brigid’s girls opted to play against the wind in the first half and clocked up two points coming from Catherine Galbraith and Kiera Corcoran. At half time it was St Brigid’s 0-2 Bray Emmets 0-1.

With the wind in the second half they added three goals from Kate Hearke, Catherine Galbraith and Jessie Quinlan added one from a free. Full time score St Brigid’s 3-2 Bray Emmett’s 0-1.

Cillard from Kerry were to be the opposition for the All Ireland Féile Division 4 Camogie Final. Weather conditions had not improved and Brigid’s again played against the strong winds in the first half. Inside the first minute Cillard were in on goal and it stood at 1-0 to 0-0.

Brigid’s responded and Catherine Glabraith found the back of the net for the Laois side. Before half time Jessie Quinlan added a point for Brigid’s. Playing with the wind in the second half, Brigid’s held Cillard scoreless and added 3-2 to their tally.