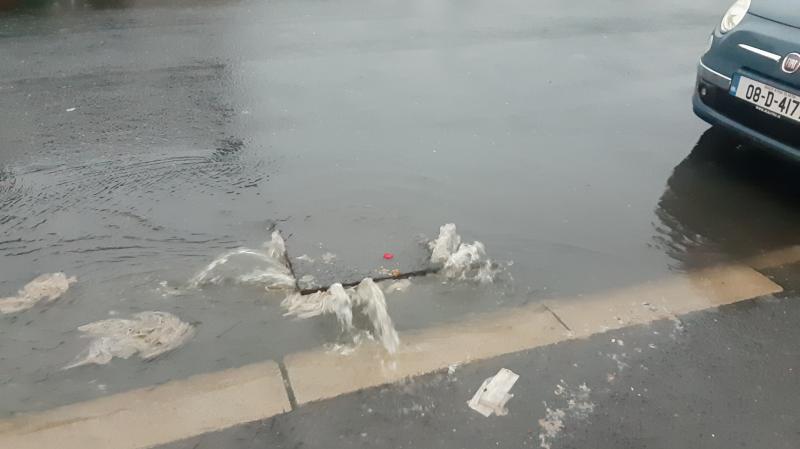 Manhole covers lifted in Portlaoise this week due to torrential rain

Laois and other midland counties could be worst hit by thunderstorm warns Met Éireann which has has issued a Status Yellow weather alert.

The forecaster issued the alert on Thursday, September 9 and warns of rain and thunderstorm warning. The alert is valid until 9pm this evening.

The warning applies to 22 counties nationwide for all of Connacht and Leinster, Tipperary, Cavan, Donegal, Monaghan, and Waterford.

Met Éireann's forecasting section says the thundery downpours break will break out in the afternoon and evening, especially over the midlands, bringing a risk of localised spot flooding.

The unstable setup over us brings the chance of isolated thunderstorms too, so keep an eye on the radar today to see if you can spot any lightning strikes ⛈️ pic.twitter.com/TX2Xj6h2El

It's the second night running that the forecaster issued a thunder warning. Heavy rain caused manholes to overflow in Portlaoise on Wednesday when a deluge hit the Laois town.

Signs of sewerage coming out onto the street

The Road Safety warning has also cautioned motorists about driving conditions which the thunderstorms will present. MORE BELOW TWEETS

Heavy, potentially thundery downpours breaking out this afternoon and evening will produce some localised flooding.

Met Éireann forecasts that the days ahead will be cooler and a littler fresher but becoming somewhat more settled over the weekend and into next week.

THURSDAY: A mix of sunshine and showers with some heavy and potentially thundery downpours breaking out this afternoon and evening, especially over the midlands, bringing a risk of localised spot flooding. Mist patches will linger around some hills and coasts. Highest temperatures of 18 to 22 degrees in mostly light variable breezes.

Scattered showers will continue overnight, some heavy or possibly thundery at first. Mild and humid with temperatures not falling below 14 to 16 degrees. Misty and foggy conditions will develop more widely as the night goes on. Winds will be mostly light and variable, increasing moderate to occasionally fresh northwesterly over Munster and along Atlantic coasts.

FRIDAY: Generally cloudy tomorrow Friday with scattered showers, a few heavy in east Ulster and north Leinster. The best of the limited sunny spells will be in southern and eastern coastal counties. Highest temperatures of 17 to 21 degrees, in light to moderate west to northwest winds.

SATURDAY: Feeling fresher with a mix of sunny spells and just well scattered patchy showers mostly over Ulster and Atlantic coastal counties. Highest temperatures of 16 to 20 degrees, in a light westerly breeze.

Mostly dry with clear spells and just some well scattered patches of rain or drizzle. Overnight lows of 9 to 13 degrees, mist and fog patches will develop once again in light northerly or variable breezes.

SUNDAY: Sunny spells however cloud will increase at times during the day bringing the chance of patchy mist and drizzle at times. Feeling autumnal, in light variable breezes, with highest temperatures of 15 to 19 degrees. On Sunday night there will be good clear spells however there will be some low cloud at times leading to some patchy drizzle. Overnight lows of 8 to 13 degrees, mist and fog patches developing also in light east to southeast breezes.

MONDAY: Good sunny spells on Monday however some showers will develop through the middle of the day, mostly in the west. Highest temperatures of 17 to 20 degrees in light southerly or variable breezes.

FURTHER OUTLOOK: Current indications suggest that from Tuesday onwards it will become more unsettled with rain and showers at times and highs in the mid to high teens.