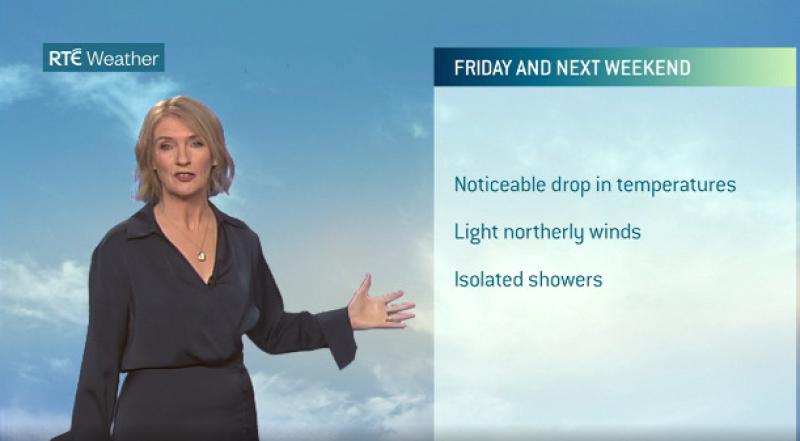 Met Éireann is warning of a dramatic weather change  for Ireland as March ends as temperatures set plummet and wintry showers also in the forecast for Ireland.

The balmy early spring warm weather is set to come to a shuddering halt this week with Met Eireann predicting the weather in Ireland is set to turn colder and more unsettled from Wednesday.

In her weekly forecast delivered on RTÉ on Sunday, Joanna Donnelly said some places would see some snow this week as temperatures fall back. She said it would fall mostly in hills and mountains and be 'fleeting'.

She said the ant-cyclone from the south that brought fine weather is set to move away during the week allowing the colder weather to set in. She said another anti-cyclone would arrive next weekend but this would come from a northerly direction meaning 'much colder' weather than the days gone by.

MONDAY: Most mist and fog patches will clear on Monday morning, however some may linger near eastern coasts. Most areas will stay dry with sunny spells, however there will be a few isolated heavy showers in the evening mainly over the south of the country. Highest temperatures of 13 to 18 degrees, coolest along the east and south coast, in light easterly or variable winds.

Dry with clear spells. Winds will stay light and variable so patches of mist and fog will develop overnight. Lowest temperatures of 1 to 5 degrees.

WEDNESDAY: Mostly cloudy. There will be scattered showers in the morning and more outbreaks of rain will move southwards over the northern half of the country during the afternoon and evening. This will introduce colder air into northern areas, with mid afternoon temperatures of 4 to 7 degrees in Ulster, but milder temperatures of 9 to 12 degrees elsewhere. There will be light to moderate north to northeast winds.

Rain will continue moving southwards on Wednesday night, followed by clear spells and scattered showers from the north. Some of the showers will turn wintry as temperatures drop down to between -1 and +3 degrees. There will be a moderate north to northeast wind.

THURSDAY: Rain will gradually clear from the southeast during Thursday and there will be sunny spells and scattered showers everywhere else, some wintry. It will be colder than previous days, with afternoon temperatures of just 5 to 9 degrees, and quite breezy in a moderate to fresh northerly wind.

Mostly dry with long clear spells, although a few showers are expected in the north and northwest. Cold and frosty with lowest temperatures of -3 to +1 degrees, in a light to moderate northerly wind.

FRIDAY: Friday is looking cold and bright with sunny spells and scattered showers. Highest temperatures of 5 to 8 degrees with light northerly winds.