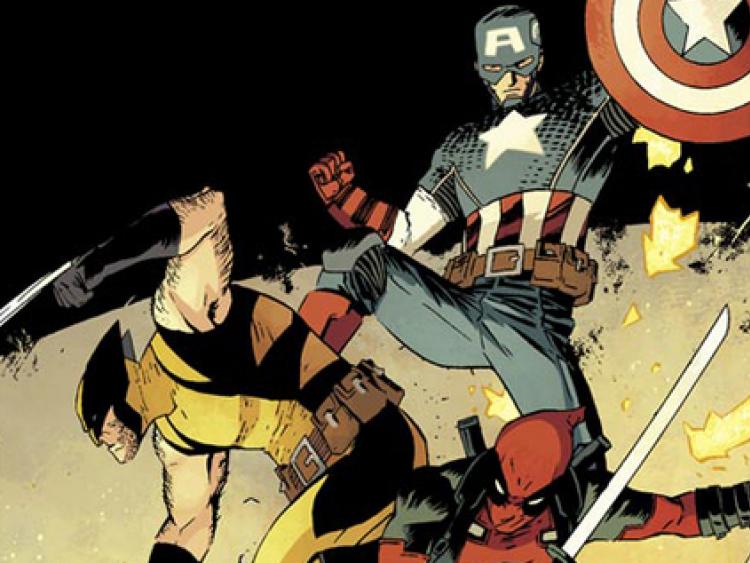 Declan Shalvey's iconic work on the Deadpool comic 'The Good, the Bad and the Ugly'

“If you want to make a comic, then just bloody make it. A pen and a piece of paper is all you need.”

Declan Shalvey has sure come a long way from his days of scribbling comic strips in the back of his geography copybook. Since debuting with his Eagle Award-winning superhero comic Hero Killers back in 2006, the Irish artist and writer has gone on to illustrate such iconic Marvel characters as Deadpool, The Punisher, Moon Night and the Thunderbolts, while his work has also featured in the Judge Dredd Megazine and the Irish language comic Rí-Rá.

His new graphic novel Savage Town, set in the world of Limerick criminal gangs and written by Declan with art by Philip Barrett, has just been released and is part of the vanguard in a newly booming Irish comic industry which is witnessing fresh talent emerging all the time.

“The industry is in a weird place, culturally superhero comics have never been more visible, monthly comics are fluctuating, graphic novels are booming,” Declan explains. “Also, improvements in publishing means artist, writers and colourists can be more ambitious with their craft.”

Declan’s own craft was honed earlier in his career working on comic adaptations of such literary and film classics as Frankenstein, Sweeney Todd and 28 Days Later, which he describes as a great opportunity to learn about storytelling. From there he graduated to comicbook royalty, drawing such Marvel anti-heroes as The Punisher, Deadpool, and the Thunderbolts, and he has continued this penchant for morally murky characters with the Limerick criminals of Savage Town.

“I like a lot or morally ambiguous stories and those types of character open the door to stories with more conflict and drama. It's certainly why I like the crime genre so much, and those superhero characters walk that line between the dynamic visuals of the superhero genre along with the dark and atmospheric mood of the crime genre. Jimmy from Savage Town was my first real attempt at writing that type of story, and I've gotten to do it more since, which I've really enjoyed. It probably is more fun, but I'm open to other types of stories. The more stories I get to tell, the more I like to spread my wings and try tell other types of stories. When it comes down to it though, I do tend to go back to those darker characters that I'm such a fan of.”

Among the pantheon of Marvel characters, Deadpool - ‘The Merc with a Mouth’ - is certainly one of the darker, or at least more adult-themed, costumed superheroes. Declan has been lauded for his work on what has been celebrated as one of the finest Deadpool stories in recent times, the Deadpool-Wolverine-Captain America team-up ‘The Good, the Bad and the Ugly’, a poignant and politically charged work with its North Korean setting and narrative tropes of human rights abuses.

“It's funny, I wasn't much of a Deadpool fan when I took that gig, but the story really spoke to me. It had action, drama, but it also was very emotional. I wasn't expecting that, and it helped make it an even more rewarding story to work on. To be honest, I didn't know a whole lot about North Korea at the time, I did some research while working on the story and discovered a lot of disturbing facts. I guess it is weirdly relevant now, I imagine it will continue to be so for a while. 'The Good The Bad and The Ugly' keeps getting rated as one of the best Deadpool stories ever, which is a huge compliment considering the amount of Deadpool stories that have been published over the years. I still get a lot of praise for that arc out of all the great stories that Gerry Duggan (the writer of Deadpool) provided.” 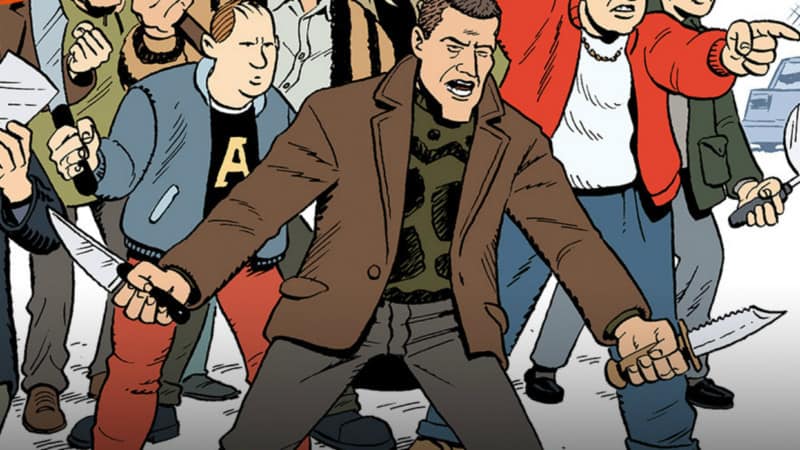 An image from Savage Town.

In tandem with the burgeoning independent comic industry, the popularity of comic conventions in Ireland has also grown in the last few years, but often these events are about more than just comics. Declan believes that the most important thing any comic convention does is enrich the community, both those who read comics and those that make them.

“There is a fantastic comics scene in Ireland right now, and a lot of creators making a name for themselves both in Ireland and abroad. What is also vitally important, is that these conventions are attended by punters: creators can't sell their hot new comic if there are no potential readers there to try it out, so it's important for any creative community to survive, that they are supported.”

Thanks to such pop cultural spoofs as The Big Bang Theory, the cliche of the comicbook nerd unfortunately hovers over the industry like stale B.O., but it is the passion of the fans that has turned comics into a billion-dollar global industry.

“I think the 'comicbook nerd' stereotype is understood, as the stereotype can be true, but rather than be elitist and push people away from the hobby, I think most comic fans are actually eager to share their fandom with those who are genuinely interested. The culture has opened up to include manga/anime, cosplay, etc, so there's a lot more young women becoming interested in comics, as long as we keep making more books with diverse genres and points of view, we should be telling stories interesting enough to read. That's just good for the future of the industry.”

Long considered the preserve of pasty-skinned boys with confidence issues, comics have undergone something of an ideological facelift in recent times. Marvel have attempted to appeal to a wider, more inclusive audience by changing the sex or ethnicity of some of their more established characters, a noble gesture no doubt but one which always carried a risk of alienating the fan-base by altering beloved characters.

“If I'm being honest, I do think change probably happened too fast and some readers became alienated, but there's also the fair argument that Marvel were making up for lost time, that they should have done stuff like that years ago,” says Declan. “I think Marvel needed to invest in a new audience, and they did, books like Ms Marvel and Squirrel Girl are massive successes. Not every diverse book performed well, but I applaud Marvel for trying, and there's certainly enough successes to justify their decision.”

He believes that the more vocal critics have used the diversity argument as an unfair scapegoat, but still appreciates that a lot of books changed very swiftly and a lot of old school Marvel fans may have felt like the characters they grew up loving had disappeared.

“I think there's a way to please the old guard, yet make sure we invest in new readership. If we only cater to one audience, we'll won't succeed. Finding a balance is key.” 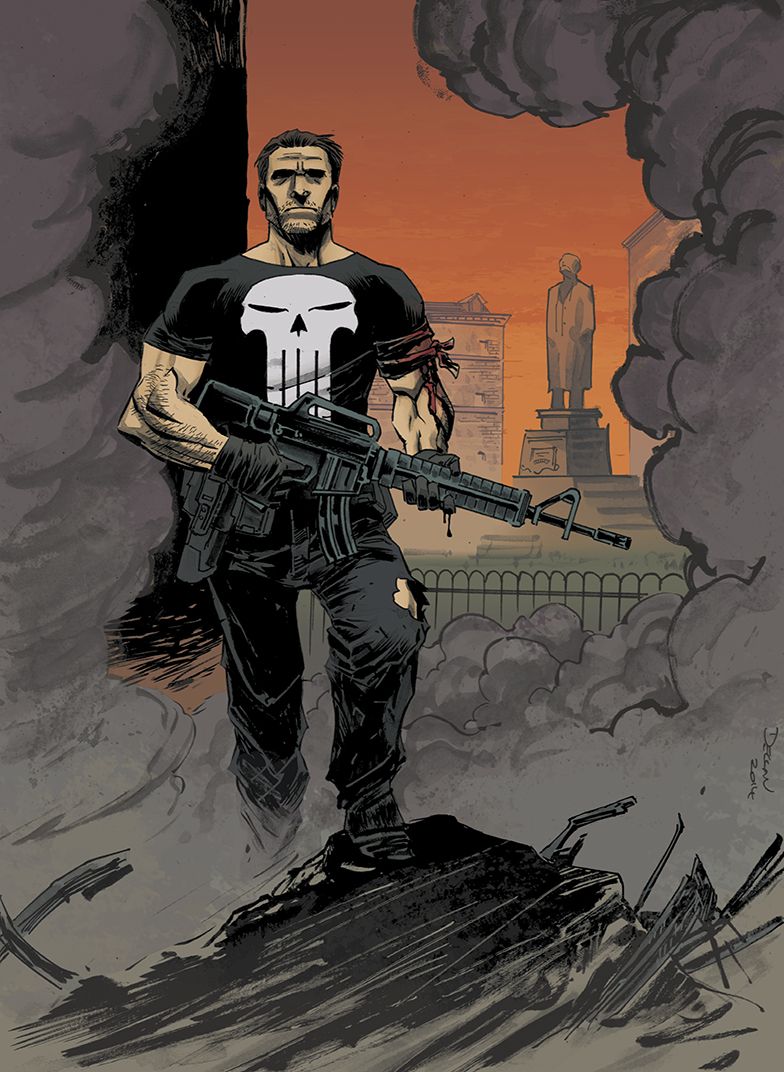 The Punisher, drawn by Declan Shalvey.

Whenever comics are mentioned, most people inevitably think of superheroes, but modern comics such as Declan’s own Savage Town show that the medium can be used to tell any kind of story. Does he think that, as fun as they are, perhaps the superhero genre has unfairly dominated comicbooks over the decades?

“I would say yes to that, but I certainly think that it helps that a lot of those superhero adaptations that people happen to be familiar with are actually quite good. But sure, there is a lot more to the medium than superheroes and I definitely was trying to show that with Savage Town. Over the years, different genres have been huge in comics, horror used to be massive, so were western comics and romance comics too. Superheroes have been dominant in the medium for a long time, I don't see that changing anytime soon, but I also think there's plenty of room for other comics in other genres to succeed, like Saga and a little known comic called The Walking Dead.”

For all those who dream of getting into the comic industry, as a writer, illustrator, colourist or inker, Declan’s advice is simple: just pick up the pen and get to work.

“We are in the age of the Internet, so much information is available, so do your research, ignorance is no excuse anymore. If you want to make a comic, then just bloody make it. A pen and a piece of paper is all you need. No one is going to expect something from you if you can't show people what you can do, so just make something. It doesn't have to be good, you can always change or improve it, but just getting it done is half the battle.”

Declan emphasises that it's also important to involve yourself with the local community, who will be your collaborators, your critics, and your best supporters. No one thrives in a vacuum, he says, so don't hide in one, just get out there and see what people are doing.

“I was lucky to have a supportive mum and supportive teachers in school. As long as I can remember, I've wanted to make comics but growing up in the West of Ireland, I had no idea how that was possible. I was determined though, so did my research, found out the best way to make a name for myself, did it, continued to work hard and eventually, it all paid off. I'm so lucky.... and relieved!”

There will be an instore signing of Savage Town by Declan Shalvey and Philip Barrett at the Celtic Comics store on Railway Street, Portlaoise, this Thursday, June 21, from 4pm. 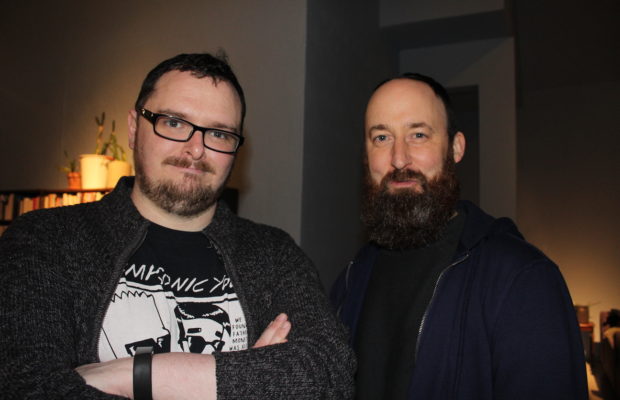