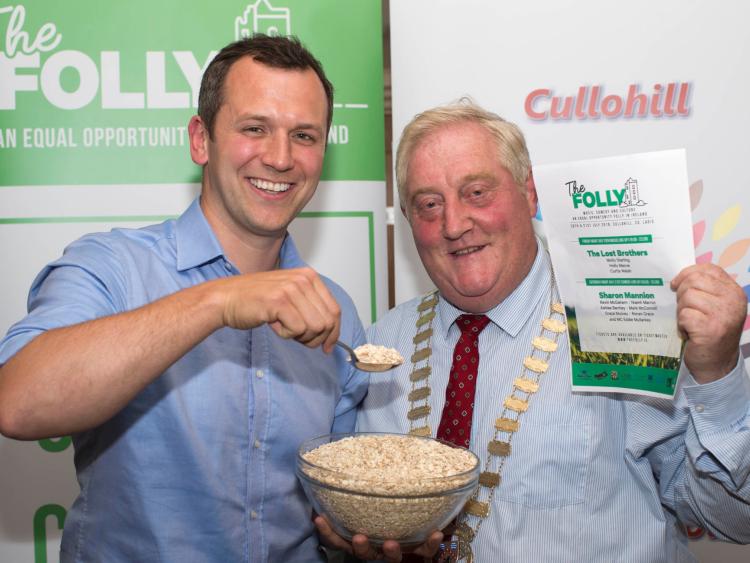 Getting ready for the Irish Porridge Making Championships are Paddy O'Connell and Cathaoirleach of LCC John King MCC at The Manor Hotel, Abbeyleix for the launch of The Folly. Picture: Alf Harvey.

Laois is already an established festival destination with Electric Picnic and the Scarecrow Festival being national favourites, and now an impressive new event aims to join them.

The Folly is a two day festival of music, comedy, culture and porridge in Cullahill village, featuring celebrities Marty Morrissey and Rachel Allen.

It boasts several firsts, with the first ever Irish Porridge Making Championships, and being the first gender balanced Irish festival, with equal numbers of male and female musicians and comedians.

It takes place next Friday and Saturday July 20 and 21.

Watch Curtis performing his new single 'Full Recovery' at the launch of The Folly.

Before it even happens The Folly is already a triumph of a small community working together, with plans in place for it to be an annual festival, all to fund village regeneration.

Organised by Cullahill Community Council, it has the support of Electric Picnic, and funding from Laois Partnership Company and Laois County Council.

The Folly was officially launched in the Abbeyleix Manor hotel last Thursday, to a room packed with local supporters. 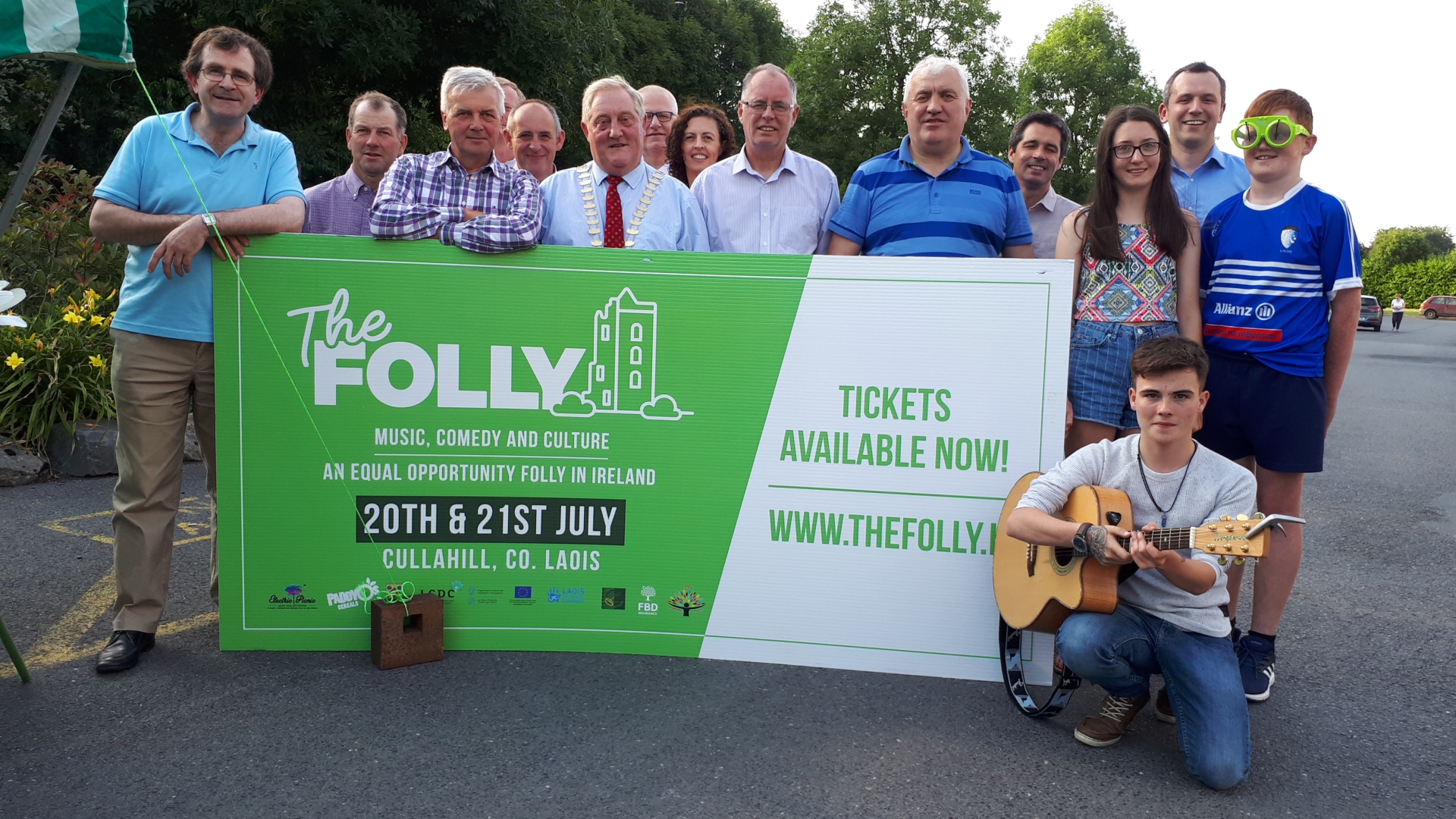 Cullahill Community Council chairman James Walsh hopes it can raise €30,000, to use as matching funding to get grants for community groups, clubs and projects.

They also hope it will pay to renovate the village hall, to make it cosy for winter meetings. The CCC is also forming a five year development plan for Cullahill.

“This is all about regenerating our community. We were identified by Laois Partnership as one of six communities in Laois that never got funding but we now aim to be drinking from that trough for a few years to come,” Mr Walsh said.

PaddyO’s owner Paddy O’Connell is delighted that his cousin, chef Rachel Allen is involved. She will be one of three judges in the inaugural Irish Porridge Championships, organised by him as part of the Cullahill Fair. Two category winners will be flown by PaddyO’s to Scotland to compete in the World Championships.

“I represented Ireland last year in Scotland and I approached the organisers about holding an Irish championships. Cullahill Community Council supported my idea immediately, and Rachel wanted to be involved too. We have 17 competitors but we want more from Laois and the midlands. Our prize is the Emerald Sporkle, made by Laois furniture maker Alan Meredith. I’m delighted to have such local support, it’s great that everything goes to Cullahill as I’m a proud local,” he said.

Paddy will lead walkers to the top of Cullahill mountain on Saturday morning at 8.30 for a tasty breakfast, and back down where Ireland’s favourite showman Marty Morrissey will introduce all the competitors and no doubt provide the banter and plenty of selfie opportunities.

“This is a super event, very different and new. We all ate porridge when we were younger, now the way the temperatures are going our cows might be eating it this winter. Laois County Council is very proud to be part of funding this festival,” he said.

“We are working closely with you, and you have come a long way in a short time. Your community plan will set out a blueprint to shape your own destiny, and the festival is a key piece of that, as a revenue base for projects. I congratulate you on putting together a professional package, you are well up there with the heavy hitters like Electric Picnic,” he said.

The folly itself is a ruined 600 year old castle, and landowner Nancy Phelan was thanked for welcoming its use for the festival.

“It will be lit up for the first time since Cromwell bombarded it,” noted James Walsh.

At the launch, the CCC presented cheques to local clubs. They gave €3,000 to Cullohill (yes, locals spell it with an ‘o’) Active Retirement Group, and another €2,000 to Harps Camogie Club towards their recent Feile na Gael win.

There are only 800 weekend tickets at €40 on sale for The Folly, with a third of them already sold. Available on Ticketmaster and in Cullahill's shop and pub. See www.thefolly.ie

Below: Singer Curtis Walsh with Marian Mahony, secretary of Cullohill Community Council at The Manor Hotel, Abbeyleix for the launch of The Folly. Picture: Alf Harvey. 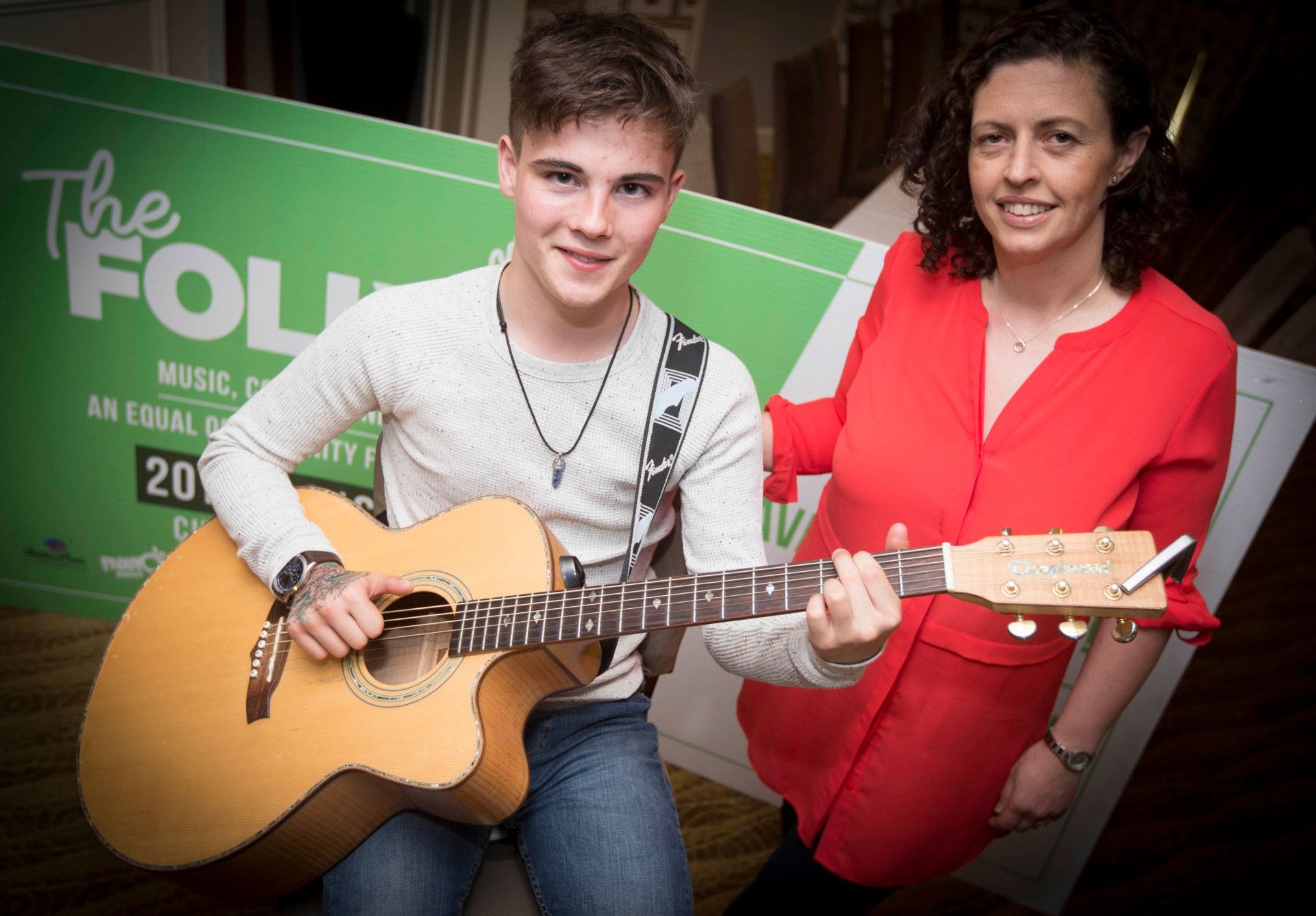