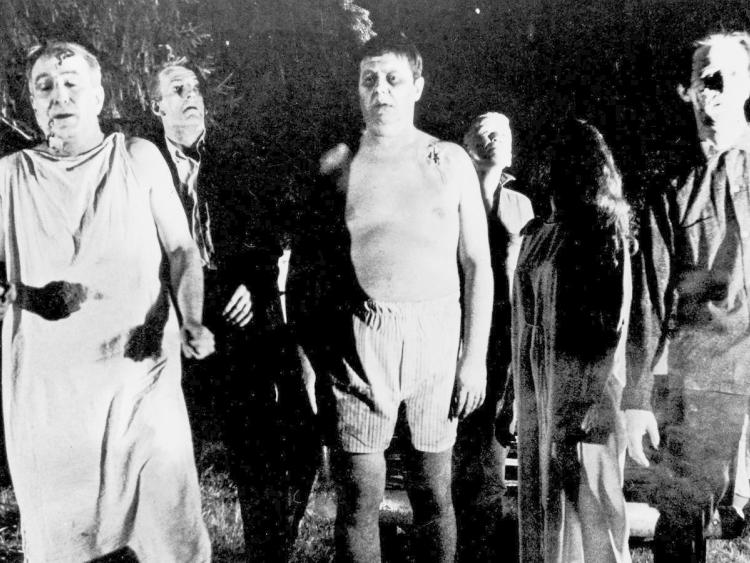 The dead walk in George A. Romero's Night of the Living Dead

Be it the dregs of Saturday night carousing still wandering the streets come Sunday’s grey dawn, or the vacant gaze of social media addicts staring blankly at their iPhones, the metaphoric power of the zombie has never been more relevant in popular culture.

A remnant of voodoo superstition, a revenant of the colonial age, the zombie has lumbered out of the mythology of creole cultures to become a global phenomenon, both a walking embodiment of our fear of death and simultaneously representative of all that is rotten at the heart of humanity. Like a shark stripped down to base sentience, all the zombie wants to do is eat; like a virus, all it does is spread; like the ultimate exemplar of capitalism, all it does is consume and increase its numbers. An entity of paranormal evil or merely a rotting corpse condemned to living death, bastardisation of Christian theology or product of the antediluvian psyche, monster or victim, the zombie waits lurking inside each one of us.

And if one man above all others is responsible for making the zombie mainstream, it is the late American filmmaker George A. Romero, whose seminal shocker Night of the Living Dead returns to Irish cinemas this month as part of a special 50th anniversary celebration. Made on a shoestring in 1968, Romero’s debut feature details the breakdown of society as the bodies of the recently dead return to life to feast on the flesh of the living. Set largely in a fortified farmhouse where a handful of survivors have gathered seeking shelter from the ravening hordes outside, the film became a drive-in favourite thanks to its stark documentary style approach and amplified levels of visceral gore (the goopy intestines munched on by the zombies was provided for the shoot by a local butcher).

Although the word ‘zombie’ does not feature in the script, with the undead assailants referred to as ‘ghouls’ throughout, virtually every trope of the modern zombie genre was codified in the film, co-written by Romero with his old advertising buddy, John Russo (who would go on to script the irreverent 1984 punk-zombie classic Return of the Living Dead after he and Romero amicably parted company). Prior to Night the cinematic zombie was usually reanimated via black magic and rarely displayed a penchant for human flesh, but Romero jettisoned the voodoo elements and literally gave the character more bite, transforming what was once a hoary old screen spook into a modern nightmare.

Over a series of movies of variable quality (immediate sequel Dawn of the Dead in 1978 is an undisputed masterpiece, while 2009’s Survival of the Dead is a mess of misplaced humour and hackneyed scares) Romero would use his zombie mythology to dissect social trends and the animalistic nature of man, with the destructive venality of the living often posing more of a threat than the undead.

Starting On October 24, CinEvents, Fathom Events, and Living Dead Media bring a newly remastered in 4K version of Romero’s groundbreaking work back to cinemas across the country, with a screening taking place in Tullamore. This is an unmissable chance to experience the film as never before, in a pristine version on the big screen surrounded by like-minded horror fans.

Steve Wolsh, CEO of Living Dead Media, said: “It’s been a two-year labor of love to bring this stunning version of Night of the Living Dead into theaters for the 50th anniversary. This movie was intended to be seen in a dark theater with a live audience, and this restoration gives fans and newcomers alike a chance to see the film as they’ve never seen it before.”

To purchase tickets and to find your closest participating cinema go to www.fathomfear.com.