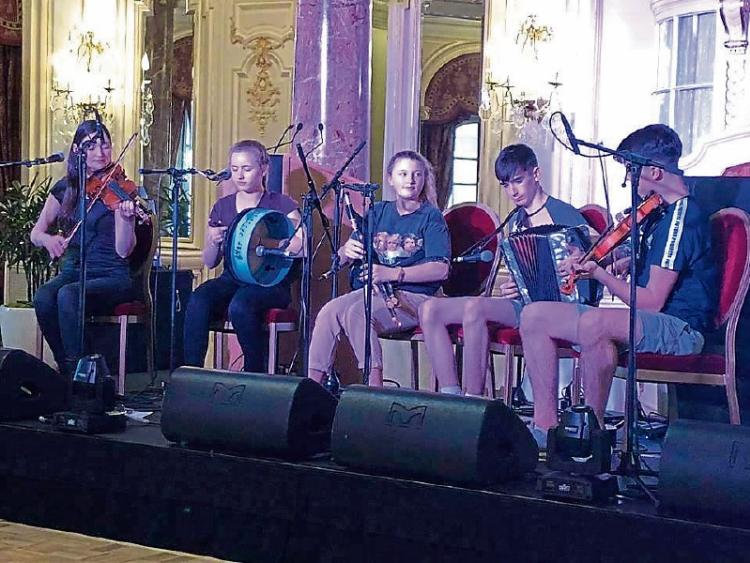 Four extraordinary young musicians from Music Generation Laois lit up the stage in Monaco with their mentor Zoë Conway on Friday, October 13, where they performed for an audience of international delegates at an event hosted by The Ireland Funds.

The ensemble was invited to perform at The Ireland Funds event as ‘Music Generation Young Ambassadors, and delegates at the event included His Serene Highness Prince Albert II, Sovereign Prince of Monaco.

Joined on stage by their mentor and celebrated Irish musician Zoë Conway, the young musicians were Izzy Donnery (bodhrán and voice), Fiadh Fitzpatrick (pipes and voice), Conall Nevin (button accordion) and Naoise Kettle (fiddle and guitar), who performed a spectacular selection of tunes arranged with Zoë especially for the evening’s event.

Speaking after the event, Naoise Kettle, said: “As my first time in Monaco, it was amazing to experience the culture and meet the local people, including Prince Albert. Playing for him was the highlight.”

They have played alongside renowned Irish musicians including Sir James Galway, Ed Sheeran collaborators ‘Beoga’ and Donal Lunny, and have composed original works together with some of Ireland’s most highly respected trad artists including Martin Tourish (Altan) and Ryan Molloy.

They are members of the Music Generation Laois Trad Orchestra, directed by Laois musician Siobhán Buckley.

The group is a representation of some 3,500 children and young people currently accessing all genres and styles of music tuition through the Music Generation Laois programme, under the leadership of programme director, Rosa Flannery.

Following the event, Rosaleen Molloy, National Director of Music Generation said: “I would like to congratulate these four fantastic young musicians from County Laois on their terrific performance this evening. It was a privilege for Music Generation to have the opportunity to perform at such a prestigious event, and we are very grateful to The Ireland Funds for providing this platform for our young musicians to showcase their own music on an international stage, in collaboration with renowned musician Zoë Conway.”