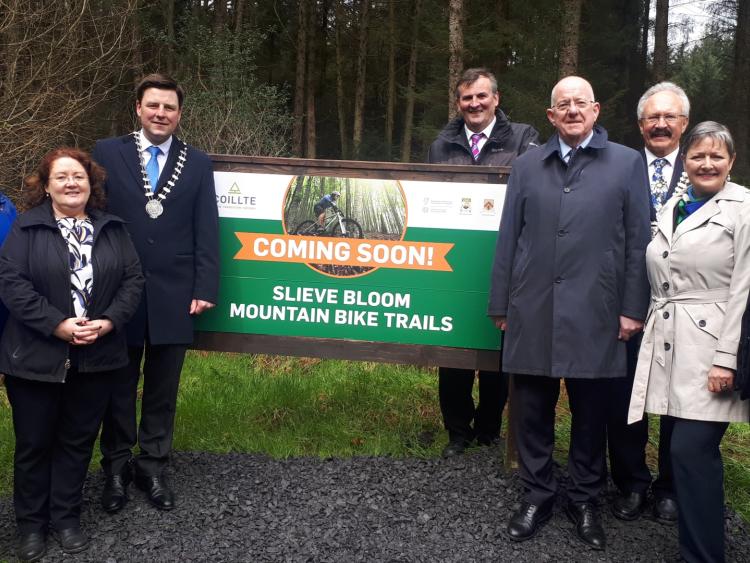 The sod has been turned on a 100km mountain bike trail across the Slieve Bloom Mountains that could bring €2 million a year in tourism to Laois and Offaly.

A melodious blackbird in the stunning Monicknew valley in Laois competed for attention last Friday April 27 as Minister for Justice Charlie Flanagan officially launched the start of construction of the €5 million Coillte project.

Phase I will begin immediately by contractors Metro Construction, with 35km of trail expected to be open by October, split between Baunreagh near Monicknew in Laois, and Kinnitty in Offaly.

It is funded by a €1 million grant from Department of Rural & Community Development’s 2017 Rural Recreation Scheme, along with more than €200k each from Laois and Offaly county councils.

The rest of the money is expected to follow in more grants from government and from Fáilte Ireland, which is yet to support the project.

Minister Flanagan fondly recalled cycling from Mountmellick to Monicknew with boyhood friends.
“This is my homeland, my home turf. This is literally a ground-breaking morning, for the Slieve Blooms and the people in the area in both Laois and Offaly. It will have a multiple of advantages for the local economy, businesses, and people and for a healthy Ireland," he said.

He had a note of criticism for Fáilte Ireland. which has left Laois out of their new Hidden Heartlands promo.

“I acknowledge the support of Minister Ring in excess of €1 million, and the commitment of both local authorities. I am not aware if Fáilte Ireland is here this morning, but somebody might give them a call and tell them Laois is very much in the midlands,” he said.

He spread gravel on a path along with Gerry Murphy, Managing Director of Coillte.

Daithi de Forge is the project manager with Coillte.
He believes the trail, added to Coillte's others in Ballyhoura, Ticknock and one planned in Sligo, will make Ireland very attractive to international mountain biking tourists.

“We expect to start Phase II in early 2019, Fáílte Ireland may be involved in funding it. We have a strategic partnership with them to develop flagship sites and it may form part of that,” he said.

Laois woman Anna Marie Delaney is CEO of Offaly County Council and is confident funding will follow to build the rest of the trail.
“This is a long time in the making and it is great to get it over the line. I am confident that working with various parties we will find funding. We have a strong case especially with Phase I developed,” she told the Leinster Express.

Cathaoirleach of Laois County Council Padraig Fleming spoke at the launch.
“The bike trail will open this landscape to a range of visitors, It is important that the county competes for its share of lucrative tourism trade,” he said.

Leas Cathaoirleach at Offaly County Council John Clendenon noted that the leaders in Korea were meeting on the same day.
“We are breaking down our own geographical border, with a lot more collaboration between Laois and Offaly to market this project. This can change the lives of people in the area,” he said.