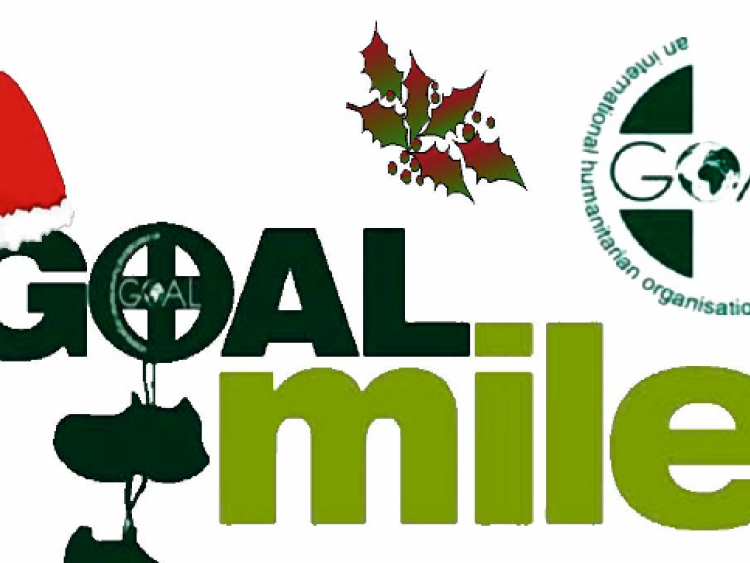 Community groups from Laois donned their walking and running shoes over Christmas and raised almost €3,000 for GOAL to support its overseas development programmes.

The 2018 edition marked the 37th year of the GOAL Mile, which is one of the country’s largest and longest-running annual fundraising events. The campaign encourages people across Ireland to walk, jog or run a mile over Christmas and donate what they can towards the aid efforts of the charity.

The two events that took place in the county were at Oakvale Woods, Stradbally and Portarlington GAA Grounds and raised almost €2,000 and over €1,000, respectively, for the Irish aid agency. Both events took place on Christmas Day and were coordinated and supported by local community groups.

This year, over €240,000 was raised for GOAL through the festive fundraisers, which highlights the enduring support of Irish families towards the aid efforts of the charity.

Speaking about the GOAL Mile and the funds raised, CEO Siobhan Walsh thanked all involved.

"We are so thankful to all our organisers and participants throughout the country for their dedication to the GOAL Mile 2018. GOAL staff work tirelessly to make a difference to the lives of people in the developing world, so to have such passion and commitment from volunteers back here in Ireland is truly inspiring," he said.

All funds raised from the 2018 GOAL Mile will go towards GOAL’s most pressing work in the developing world. GOAL is currently implementing food, water, healthcare, emergency response and other programmes across 13 countries in Africa, the Middle East and The Caribbean.

The GOAL Mile was established in 1982 when GOAL's late chairperson and international athlete, Noel Carroll, came up with the idea to encourage people and their families to run a mile at The Phoenix Park on Christmas morning for GOAL. More than 250 people turned up to that first event and from there, it has flourished to become one of the most popular and longstanding annual fundraising events in the country.

Since that first Mile in 1982, those organising, running or walking a GOAL Mile have helped raise millions of euro for GOAL's various humanitarian programmes across the developing world.