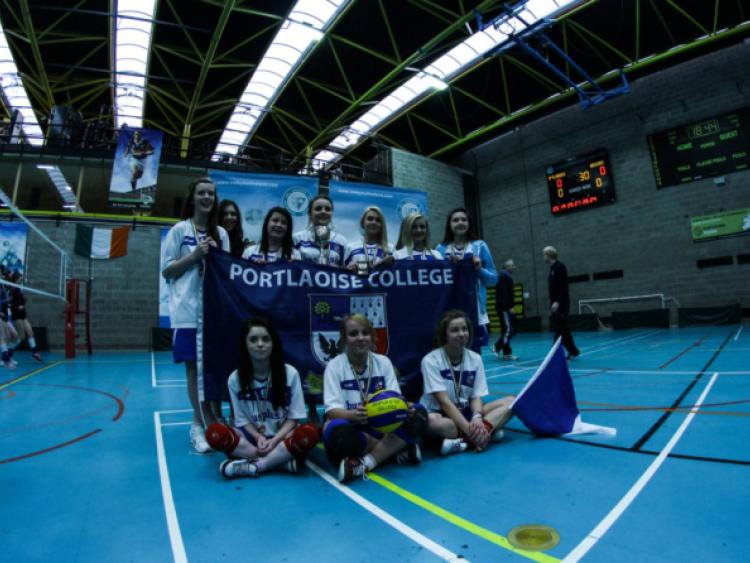 The team defeated St Bridget’s College, Loughrea with a 2-1 win in what was described by spectators as “one of the best cadette finals in years”.

This capped a truly remarkable year for ladies volleyball in Portlaoise College. On December 6 last the senior team defeated Athenry College to win the school’s first ever ladies All-Ireland title.

The game between Portlaoise College and St Bridget’s of Loughrea had everything both the volleyball and non-volleyball fan could enjoy.

Even neutrals and bystanders in UCD’s gym were stopped and glued to the final moments of the game as Portlaoise College saved two match points at the death before emerging victorious in a nail-biting rollercoaster of a game.

The exciting final rally ended with the captain Leah Murphy placing the final ball past the despairing Loughrea players to give Portlaoise the game.

Scenes of joyous celebrations followed as the strong Portlaoise College following rose to congratulate their team.

The variety in Portlaoise College’s play was the key difference between the teams on the day and Loughrea struggled to return the Portlaoise attack.

Klaudia Putkowska was awarded the Most Valuable Player, having won the same award during the senior game just two months previous.

The victorious team were welcomed home by a guard of honour by the entire student body including their teachers and led by the Principal and Deputy Principal Noel Daly and Patricia Cullen.

A big congratulations goes out to everyone involved.