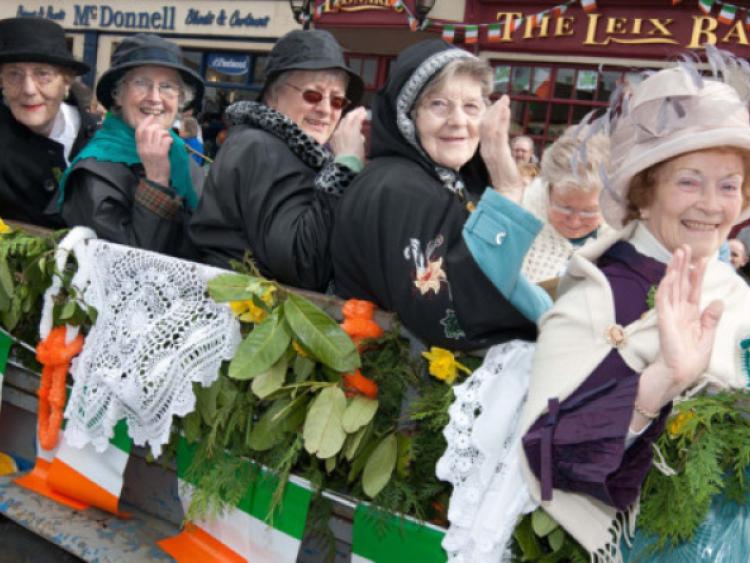 This year, the Mountrath and District Camera Club will be displaying their skills with an exhibtion in all the disused buildings in the town. There are almost 100 photographs included for display and the exhibition is sure to be a big attraction after the excitement of the parade. Everyone is invited to attend.

This year’s parade will start from the hurling field at 12.15pm. It will feature groups and organisations from Mountrath and the surrounding areas.

There will be music on the street afterwards, as well as bouncy castles, face painting and lots of fun for children.

Abbeyleix will do their own version of the latest You Tube sensation, the ‘Harlem Shake.’

Once all the flaots are on main street, an airhorn will sound and the music will be blasted out on the speakers. The people in the stalls and the parade will all stop and start dancing.

There is no specific theme for this year’s parade, which will be led by a Colour Party from the Irish Army. Up to 60 floats are participating, and there will be 30 stalls along Main Street, bringing back a traditional feel.

There will be performances from local bands, and singer Michael Kirkman will perform on the viewing stand. Cllr John Joe Fennelly will be the MC, with prizes for best float and best dressed window.

Every effort is being made to make the parade in Stradbally as colourful as ever. Following on from the success of last year’s parade, individuals, clubs, organisations, businesses are all being invited to take part. Stradbally will parade from 11am to 11.30am mass.

Durrow are making a weekend affair of it this year, and their St. Patrick’s Day festival will get under way on Saturday, March 16 with a children disco in the Community Hall, Durrow. u-12 Admission is €3.

There will be an Outdoor Country Market in the Square from 11am to 5pm on St Patrick’s Day.

Following the parade a Harps Hurling Exhibition match for Junior and Senior Infants will take place on the Green. There will also be Bouncy Castles and other Games on the Green.

Tickets are currently on sale for the St. Patrick’s Weekend Raffle with a chance to win a Weekend Break to the value of €250, a Load of Firewood or Sunday Lunch for two in the Ashbrook Arms. All proceeds from the weekend’s festivities will go towards meeting the community’s share of the cost of the Square Regeneration Project.

Leprechauns required for St. Patricks Day. If you and a few of your friends are up for laugh and want to help, contact Marian O’Mahony to arrange taking part on the day!