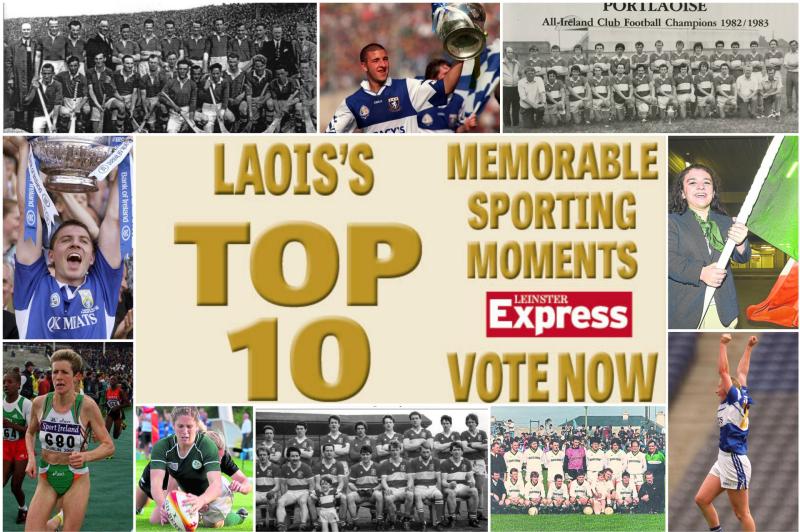 Welcome to our selection process to find the Laois' Greatest Sporting Moment, where we have assembled a shortlist of ten iconic sporting moments for you to choose from.

Inspired by the RTE programme, we have decided to give the Laois public the chance to vote for what they believe to be the county's greatest sporting moment.

In a similar vein to the RTE series, we have gone with moments which have taken place within living memory, so this will explain why something like the 1915 All-Ireland victory does not make the shortlist.

As with anything of this nature, the moments which have not made the list will be debated as vociferously as those which have, and the depth of sporting achievements in Laois are probably best featured by the moments which do not feature on this list.

While Laois is generally regarded as GAA county, we have a number of sports which make the shortlist, as people have represented their county and country to the highest levels internationally.

Those moments which have been chosen, we feel, are iconic in their own right, moments which captured the imagination of the entire county and left their mark on Laois' sporting history.

If you feel compelled to vote for a moment which holds a particular significance to you, then you can go so by selecting your chosen moment above.

Our ten chosen moments, in chronological order, are as follows;

The last significant victory achieved by a Laois senior hurling team, as they beat Kilkenny 3-8 to 3-6 in the final, because losing out to Tipperary in the All-Ireland final later that year. Find out more HERE

One of the best club teams the province ever produced, Portlaoise finally got their hands on the All-Ireland title by defeating Clann na nGael from Roscommon in 1983. Find out more HERE

One of the iconic days in Laois GAA history, Laois beat a highly fancied Monaghan side in Croke Park for the county's first NFL title since 1926. Find out more HERE

A day which has gone down in local folklore, as Portlaoise AFC packed a few thousand people into Rossleighan Park and then went and beat Dublin powerhouses Home Farm 3-1. Find out more HERE

The team which officially announced Laois' emergence as the foremost production group for young footballers, a title we would hold around a decade. A 2-11 to 1-11 win over Kerry in the final ensured their place in history. Find out more HERE

The day Mary Kirwan showed us all she had nerves of steel, as she kicked a last-second free to claim an All-Ireland title for Laois after an epic encounter with Mayo. Find out more HERE

Anne Keenan Buckley is probably the greatest Laois athlete of all time, and she was in brilliant form back in 2002 when, at the age of 40, she claimed a top-ten place in the World Cross Country Championships to help Ireland to a team bronze medal. Find out more HERE

Laois biggest achievement in senior football in recent times, and a victory which will surely stand the test of time. In one of the most dramatic Leinster finals of recent years, they beat Kildare in a game that had goals, red cards, great points and more tension than is medically recommended. Find out more HERE

In terms of execution and importance, few tries stand up to Miller's in Irish rugby history. It provided Ireland with their first ever win over New Zealand, inflicted New Zealand's first ever defeat at a Women's RWC, and was an outstanding score to boot, one which played a big part in raising the profile of Women's Rugby at the time. Find out more HERE

Laois has produced some brilliant Paralympians over the years, but Turner's performances in Rio really caught the local, and national, imagination. She qualified for finals in all of her swimming events, and was chosen as the Irish flag bearer for the closing ceremony. Find out more HERE