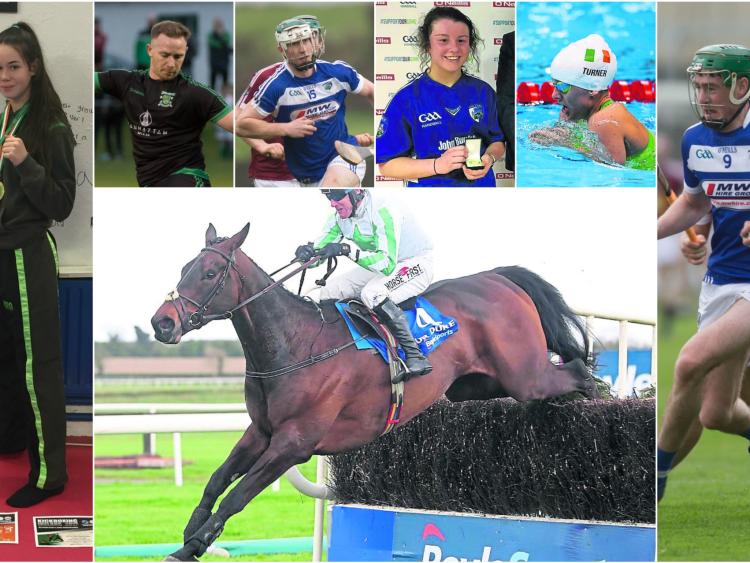 After an incredible month of sporting action, we have seven nominees for the Downey's Auto Stop/Leinster Express Sports Star of the Month for April.

See below for a brief round up of each nominee.

The first nominee is Portlaoise AFC player Paul Cahillane, who has been in outstanding form throughout April as the club clinched promotion from LSL Division 1B. The one-time CeLtic trainee has been pulling the strings in midfield for Portlaoise all season, but his form in April went to an even higher level, as Portlaoise confirmed their promotion last Sunday with a 3-2 win over Skerries Town.

Next up, and the first two-time nominee, is Laois senior hurler Patrick Purcell from Rathdowney-Errill. Purcell was simply outstanding on Sunday last, scoring 3-6, all from play, from midfield, as Laois shot down Meath in Navan. Purcell was also nominated in March, but could be in line for more grandiose nominations than this, with RTE commentator Brian Carthy, a member of the All-Star nominations panel, waxing lyrical about the Laois midfielder on RTE radio at the weekend.

Paddy Purcell's club mate and midfield partner with Laois, Ross King, is our third nominee. Back on the 1st of April, King gave a virtuoso display in the NHL Division 1B relegation playoff with Kerry, scoring 0-13 to lead his team to an absolutely crucial victory. He followed that up with 0-10 against Westmeath in the opening game of the Leinster Round Robin, before hitting 0-11 on Sunday against Meath in another brilliant performance.

Another second-time nominee sees Portarlington's Nicole Turner back in the running, after she won a bronze medal in Sheffield last weekend at the latest round of the World Para Swimming championships. Nicole recently moved to a club in Dublin to take her career to the next level, and it appears as though it is already paying off for her. The next round of the Para Swimming Series takes place in Indianapolis, USA in June.

Our next nominee is the first animal entrant thus far, and it is the Cooper-family owned horse Our Duke. With jockey Robbie Power on board, Our Duke powered to the Irish Grand National on Easter Monday, having been bred by the Coolrain based syndicate. He is trained by Jessica Harrington, and was the 9/2 favourite for the race, something he more than justified with a dominant display.

Our sixth nominee is Chloe Shortall, a young kickboxer from the Laois Martial Arts club, who won two All-Ireland titles in April. Despite still being U-14, Chloe has risen rapidly through the ranks, and will now represent Ireland at the European Championships in September. She also coaches in the club, doing her part to help out those even younger than her.

The final nominee is from Cullohill Handball Club. Molly O'Connor won the All-Ireland U-17 Handball title, becoming just the third club member since 1990 to claim an All-Ireland title, as she defeated Aoife Hurley from Cork in the final.