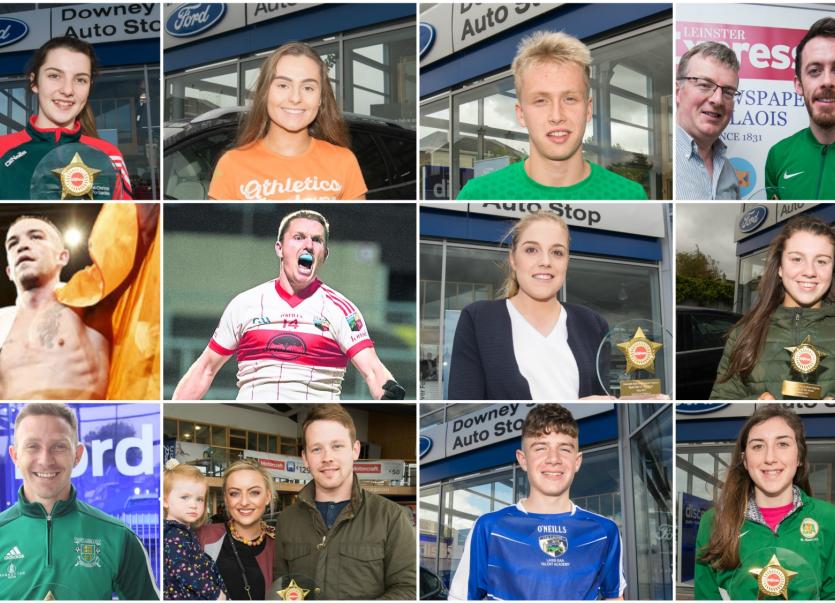 Our twelve Sports Star of the Month winners in 2017.

After twelve months of top class sporting endeavours from athletes all over the county, we now bring you our poll to crown the Leinster Express/Downey's Auto Stop Sports Star of the Year for 2017.

Details of all our nominees are listed below, select your favourite and then cast your vote. The poll will close at midday on Friday, February 2nd.

The Irish underage basketball star guided Scoil Chríost Rí to All-Ireland glory in January, earning MVP honours as they got their hands on gold medals in the National Basketball Arena. Remarkably, she won another All-Ireland title with the school earlier this week, and was MVP in the final once again!

The St Abban's athlete picked up the February award after breaking the Irish indoor 400m hurdles record in France, while also winning gold in the 60m hurdles at the Irish Intervarsities finals for UL.

Another St Abban's Track and Field star, Ruby picked up the March award following a brilliant performance at the National Juvenile Indoor finals. She won the U-17 girls High Jump, and followed that up with a bronze medal in the Long Jump.

Cahillane is renowned for his ability on the GAA pitch, but it was his soccer ability which won him the April award. He was in sensational form in April, scoring three and setting up three more for Portlaoise AFC as they were en route to winning the LSL Division 1B trophy, their first ever piece of silverware at intermediate level.

The Laois camogie star Sarah Anne Fitzgerald topped the poll in May after guiding Laois to the Leinster Camogie title. She scored 0-7 in the semi-final against Carlow, and then added another 0-8 in the final against Westmeath, earning a Player of the Game trophy in the process.

The Laois underage football star collected the award for June after he headed to the Féile Skills Challenge in Abbotstown, where the best U-14 footballers in the country pitted their skills against each other. Over a tough course, Oisin saw off all challenger and emerged as the most skillful U-14 footballer in the country.

The Portlaoise swimmer Sean Scannell was the July winner, after he competed at the European Youth Olympics in Gyor, Hungary. While there, he was the only Irish swimmer to qualify for a final, while also making up part of the Irish Junior team which broke the 200m Medley Irish record.

Timahoe attacker Ruairi O'Connor was our August winner after one of the most incredible scoring performances witnessed in Laois club football for some time. O'Connor scored 5-9 for Timahoe in a single game, as he lead them to victory over Courtwood in the IFC.

The only person to be nominated for two sports last year, Molly O'Connor picked up the September award after her Player of the Game display in the All-Ireland U-16 camogie final, as Laois beat Antrim after a replay. She had been nominated for Handball earlier in the year.

Emo stalwart Paul Lawlor took home the October award after his brilliant displays for the club. The team's manager and leading scoring, he hit 2-4 in the IFC replayed final against Portlaoise, and the scored another 1-2 as they beat Hollywood from Wicklow in the Leinster IFC. To cap off the month, he kicked a last-gasp equaliser against Ballyboughal of Dublin to earn his side a replay in the Leinster IFC semi-final.

Up-and-coming athletics star Ava O'Connor was our November winner, after she swept aside all challengers in the Leinster Cross Country Championships in Adamstown to claim gold in the U-15 girls race. She went on to represent Ireland for the first time in early January.

Our final winner of 2017 was professional boxer TJ Doheny, with the Portlaoise man scoring the biggest win of his career so far this month. He defeated Thai boxer Mike Tawatchai in Bangkok to secure himself a world title shot against Ryosuke Iwasa from Japan, with that fight due to go ahead at some stage this year.

Don't forget to place your vote before 12pm on Friday, February 2nd.