Tour de France legend Stephen Roche is backing Laois and other Down Syndrome Ireland branches for its cycling tour around Leinster while raising much needed funds for the charity.

The annual Tour de Leinster gives cyclists the chance to cycle with Irish Tour de France and Giro D’italia legend Stephen Roche, who will cycle shoulder to shoulder with participating cyclists for the four days.

The event kicks off in TV3 in Ballymount, Dublin and the route traverses Leinster in a spectacular route taking in counties Wicklow, Wexford, Carlow, Kilkenny, Laois, Offaly, Westmeath, Meath and Louth with some amazing scenery along the way.

Each participant will cover their own costs, so all funds raised from the Tour de Leinster event will go directly towards Down Syndrome Ireland to help support essential services in the participating Leinster branches, including the Laois branch.

The charity is also encouraging people to come out and support the amazing cyclists as they pass through their counties.

Speaking at the launch of the 2017 ‘Tour de Leinster’, Stephen Roche looked forward to contributing.

“I am delighted to be part of this fantastic event for Down Syndrome Ireland once again. The Tour de Leinster is a magnificent cycling challenge, it's so well organised and you get amazing support from people with Down syndrome and their families along the way. I look forward to meeting many of the friends I made last year and to a very enjoyable four days of cycling”.

Stephen celebrates the 30th anniversary of cycling's triple crown this year. In 1987 he won the Tour de France, the Tour of Italy and the World Championship. 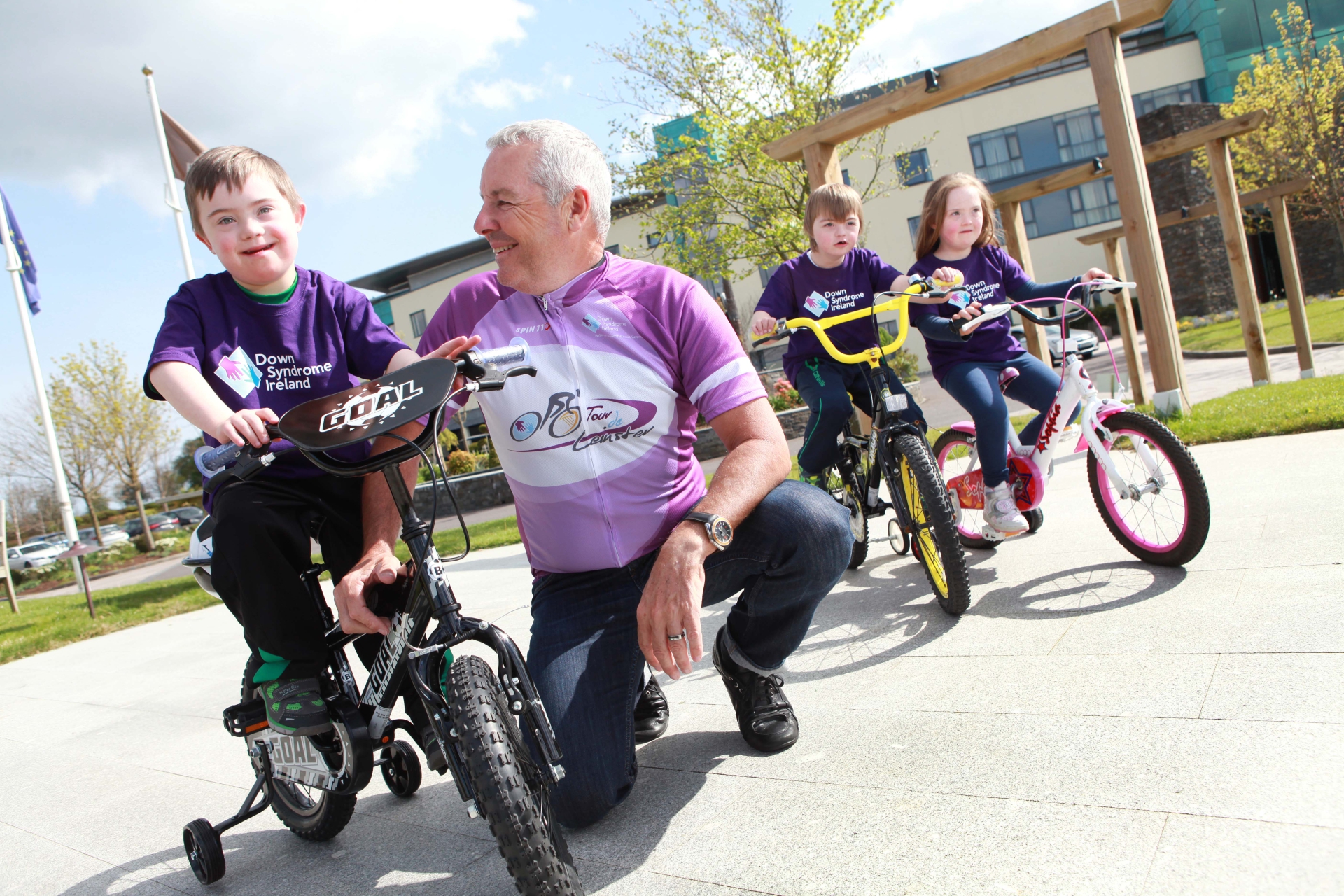 Pictured above at the launch of the Tour the Leinster with Stephen Roche are Eoin Cotter (left), Mike Clifford, Suin Marron (right). Pic. Diane Cusack

Commenting at the launch Down Syndrome Ireland President, Mary Doherty, welcomed Stephen on board.

“We are delighted that Stephen Roche has decided to come on board again this year to help raise much needed funds for people with Down syndrome in Ireland. It is great to see so many people out cycling to support the important work our Leinster branches are doing locally for the children and adults with Down syndrome as well as their families, we cannot thank these generous people enough.”

Kevin Hampson, a parent and member of the Down Syndrome Ireland’s Louth/Meath branch, highlighted how funds raised from the Tour de Leinster are spent locally.

“The Early Intervention Development Programme is for pre-school children with Down syndrome. Our Early Intervention specialists call to the homes of the children for two sessions a month during the school term. It’s basically therapy in a play situation and covers many aspects such as motor skills, hand eye coordination, some speech & language, singing and coordination so it’s very wide ranging. The money raised from the Tour de Leinster helps with the funding shortfall to run this programme for approximately 50 local children.”

A registration fee of €190 is required from each cyclist to participate in the event. This fee covers two Tour de Leinster jerseys, all tea/coffee/lunch stops, fully experienced support crew including outriders and medics, luggage vans and a Sunday evening homecoming reception.

Each cyclist also covers their own hotel cost of €195 which includes three nights bed and breakfast with evening meals on Thursday, Friday and Saturday night. The total cost of participation, including registration and accommodation is €385 per person. Each cyclist is required to raise a minimum of €500 in sponsorship for Down Syndrome Ireland.

Interested cyclists can visit www.downsyndrome.ie for more information and to register or call Sandra or Mark on 01 4266500.