Festival of Flight a 'resounding success' in Laois 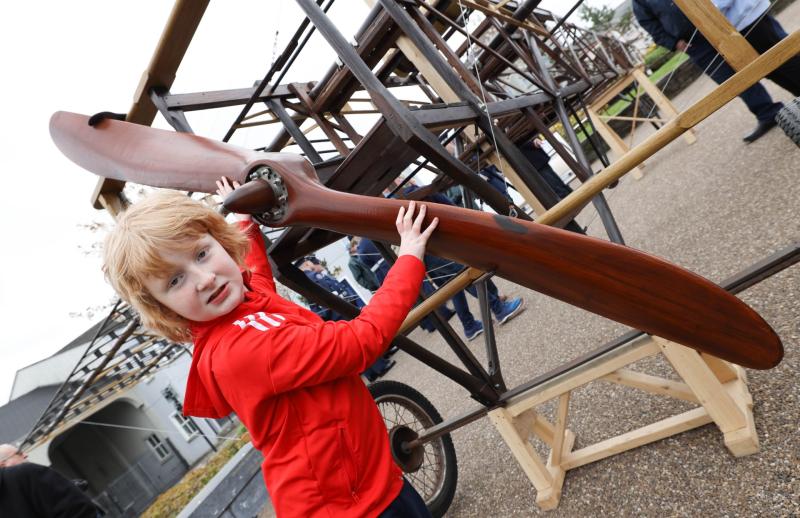 The first ever Festival of Flight held to celebrate the rich history of aviation and exploration in Laois has been a resounding success, say the organisers.

The events, which ran from April 7th to 10th included school and family science and arts workshops, a music and poetry event, aircraft technical networking events, tours, films and a commemoration ceremony and drew visitors to the county from across Ireland.

The Festival of Flight was run by the Col Fitzmaurice Commemoration Committee in partnership with Laois County Council, Laois Heritage Society, Music Generation Laois, the Dunamaise Arts Centre and Midlands Science, supported by the Heritage Council, Creative Ireland Laois as part of the Creative Ireland Programme 2017-2022, The Decade of Centenaries Programme of the Department of Tourism, Culture, Arts, Gaeltacht, Sport and Media.

The Impossible Dream
A special performance of the Impossible Dream, the piece composed by Martin Tourish and the young musicians of the Music Generation Laois Trad Orchestra to celebrate the life and achievements of the Portlaoise Aviator James Fitzmaurice was held at St Peter’s Church of Ireland Church in Portlaoise on Saturday April 9.

The event featured gripping talks on the first east west transatlantic flight in April 1928, by the Chair of the Col Fitzmaurice Commemoration Committee Teddy Fennelly and former General Officer in Command of the Irish Air Corps, Ralph James. Poet Laura Murphy performed her moving piece inspired by her home county, “In Laois I Fly Free” accompanied by Dale McKay on the bodhrán, to great acclaim. MORE BELOW PICTURE. 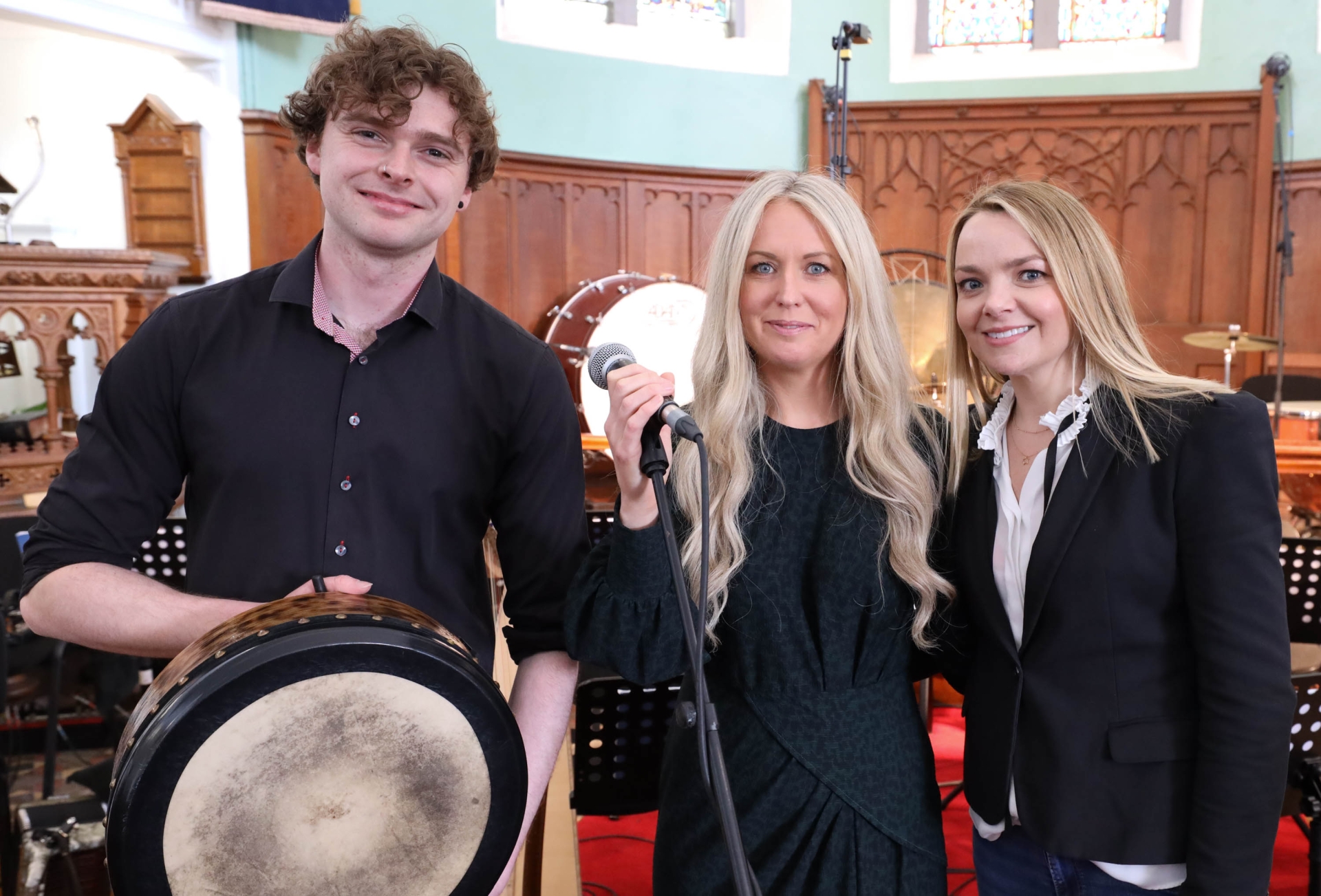 First East West Transatlantic Flight
On Sunday April 10th a special ceremony was held at Fitzmaurice Place in Portlaoise to mark the 94th anniversary of the first east west transatlantic flight in April 1928, including a parade from the Irish Air Corps and the Irish United Nations Veterans Association Post 27 Portlaoise Branch, and a fly over by members of Lime Tree Airfield and the Irish Historic Flight Foundation. Wreaths were laid in memory of the three aviators by representatives of Laois County Council, the Irish Air Corps, the Col Fitzmaurice Committee, Laois Heritage Society and the United Nations Veterans Association.

The Portlaoise Plane, the 100 year old artefact built in Portlaoise which was one of the first planes to fly in Ireland, was on public display for the event, in the public square named for James Fitzmaurice, in memory of his great achievement. MORE BELOW PICTURE. 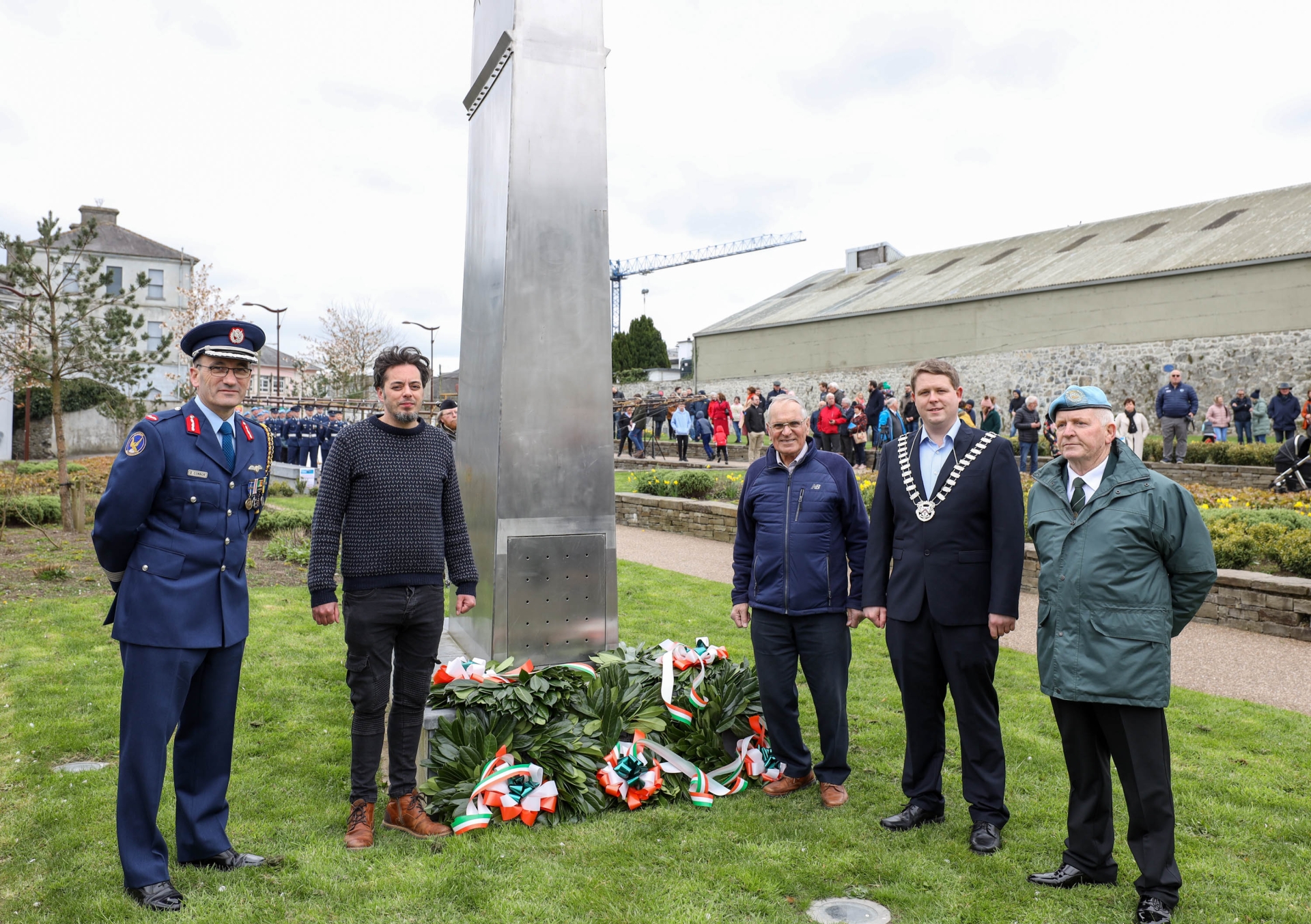 Teddy Fennelly is Chair of the Colonel James Fitzmaurice Commemoration Committee which organised the festival.

“We are delighted that the Portlaoise Plane was on display for the public again during the Festival of Flight. As well as being a valuable artefact on its own right, the Portlaoise Plane is linked to Portlaoise’s other major aviation story: A young James Fitzmaurice records in his memoirs that he witnessed the construction of the plane and was also present when it made its first short experimental flight.

"This early exposure to the excitement of flight was credited by Fitzmaurice with inspiring him in his career as a pioneering aviator. This links the Portlaoise Plane directly with the first east-west transatlantic flight of the Bremen in 1928 – elevating the story and confirming the place of Portlaoise as the centre of Irish aviation history,” he said.

“Laois is very proud of our native son Colonel James Fitzmaurice. His achievements have been celebrated and commemorated over the years through ceremonies, sculptures, artworks and new music compositions and I am proud that Laois County Council has led the way in supporting all of these celebrations.

“This Festival of Flight is another project brought about by the collaborative approach taken by the Laois County Council Culture Team with the support of Creative Ireland and the Heritage Council and I am very proud of how the Festival of Flight showcases how our culture Team members from the Heritage, Libraries, Arts, Music and Archives sections work together through the Creative Ireland programme, to become more than the sum of their parts, and producing really imaginative, ground breaking work,” he said. MORE BELOW PICTURE. 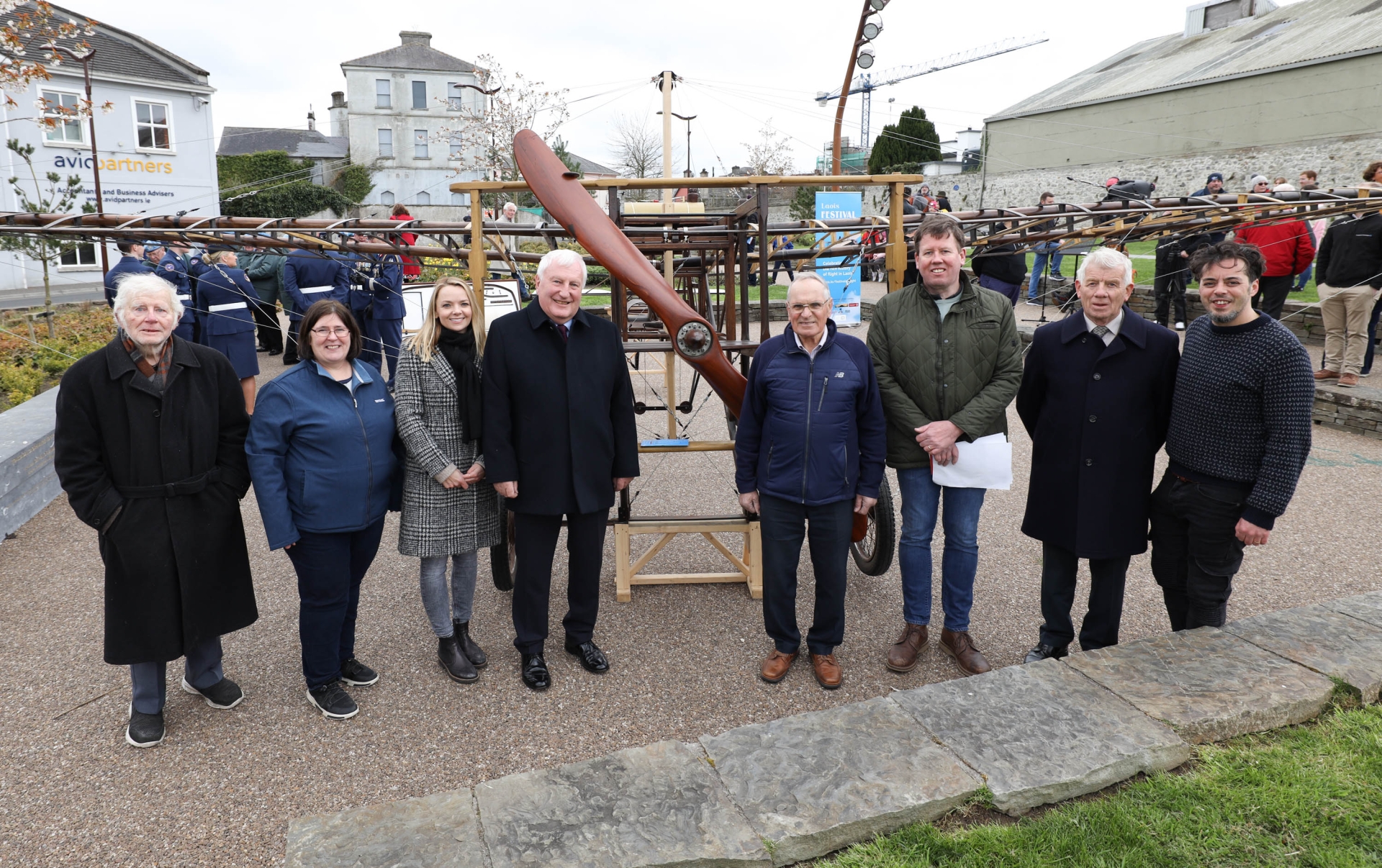 The commemoration was also addressed by the General Officer in Command of the Irish Air Corps, Brigadier General Rory  O’Connor.

“I am delighted to be present here today to celebrate Col James Fitzmaurice and what he has given to aviation, not only in Ireland, but also around the world. I would like to thank the organising committee who have and continue to remember this great pioneer in aviation. As Alan mentioned yesterday, this celebration will continue for the years ahead, all the way up to the Centenary of this historic flight, which we will have to celebrate in style in 2028!

“I’ve no doubt thoughts have begun to form as to how that celebration could take place, which should be celebrated on a national level, given the significance of this flight and the importance of aviation to Ireland. And for those of us who were fortunate enough to experience yesterday’s suite of music, the Impossible Dream by Martin Tourish in collaboration with the Music Generation Laois Trad Orchestra, all I can say is, that for my part, I found it a truly inspirational and engaging piece of music,” he said.

Brig Gen O’Connor also spoke about the centenary of the foundation of the Air Corps which occurs in 2022.

“In celebrating our centenary, we’re able to look back on what has come before, celebrate what we have now, and look forward to inspiring a new generation to get involved in aviation for the future. So, we commemorate, educate & inspire! Which is what events like the Laois Festival of flight are all about,” he said. 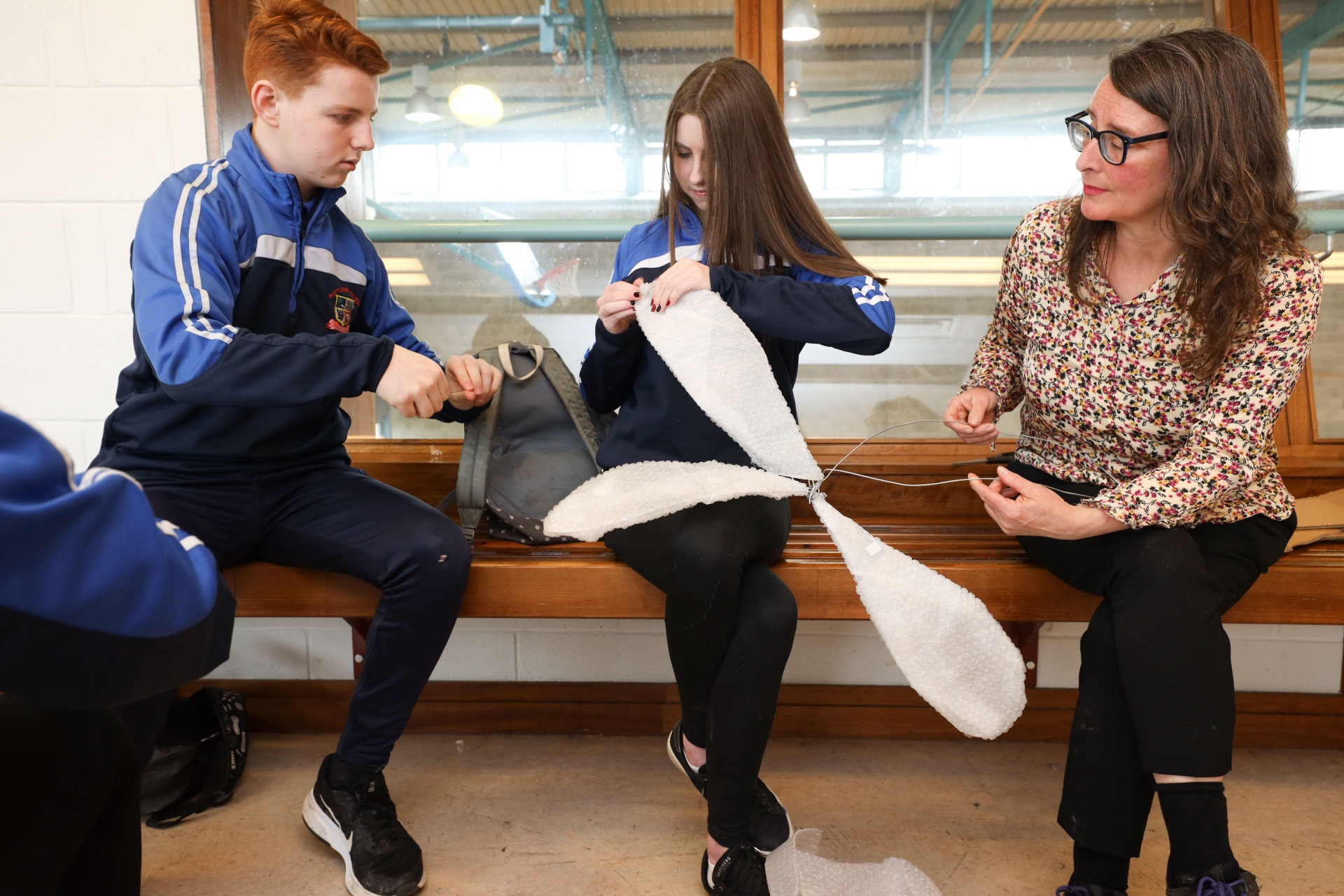 Aircraft Technical Forum
The Festival of Flight also hosted a networking meeting of senior aircraft technical professionals in the field of aircraft leasing at Bloom HQ in Mountrath, drawing together the history of aviation in Ireland with its bright future.

Col Fitzmaurice Commemoration Committee
The Festival of Flight is led by the Col Fitzmaurice Commemoration Committee, which is made up of Teddy Fennelly, Alan Phelan, Michael Parsons, Louise Fennelly, PJ Kavanagh, Sean Murray and Catherine Casey. The event was run in partnership with Laois County Council, Laois Heritage Society, Music Generation Laois, the Dunamaise Arts Centre and Midlands Science, supported by the Heritage Council, Creative Ireland Laois as part of the Creative Ireland Programme 2017-2022, The Decade of Centenaries Programme of the Department of Tourism, Culture, Arts, Gaeltacht, Sport and Media.

For details of the Festival and future aviation events, see www.laois.ie/festivalofflight