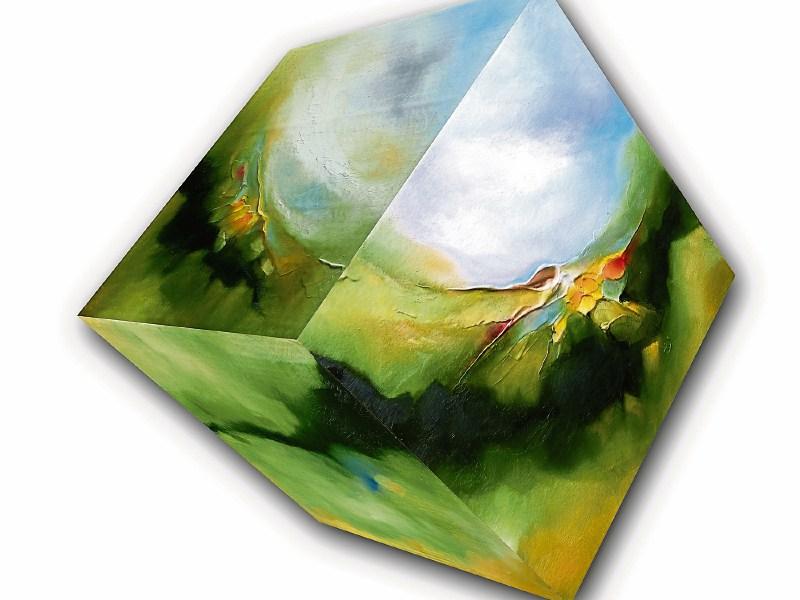 Dunamaise Arts Centre is proud to present an exhibition entitled 'Escape', featuring the work of seven artists, which runs until Sunday, July 31.

Exploring their place in the world, within the natural and built environment, the exhibition illustrates their breathtaking view of landscape, presented through various media including oil paintings, photography, ceramics, encaustic paintings, charcoal, pencil drawings and video.

Rosemarie Langtry’s encaustic work is a combination of beeswax, pigment and resin, which is fused layer upon layer an ancient medium used thousands of years ago in Egypt. Her paintings are inspired by the landscape, explore atmosphere and deals with such things as beauty, history, myth and our connection as a people to our rural surrounding and its Boglands. These paintings are more than just a painting as they include a piece of our landscape encapsulated and preserved in the wax medium.

Lelia Henry is a professional artist, based in Athlone. Her practice is drawing based and she works mainly in charcoal and graphite. Her process involves building up tones gradually, using a combination of charcoal and carbon.

Lelia’s drawings are a direct response to the landscape. Her aim is neither photo-realism nor loose interpretation, but to emphasise glimpses of the everyday in terms of light, shade, and texture. She tries to convey the essence and atmosphere of a place, while maintaining a sense of depth.

Maria O’Brien’s work explores landscape painting inspired by photography from social media. As overall winner of the Dunamaise Open Exhibition 2013, Maria was awarded a month-long residency in Laois Arthouse, where she is still a studio artist. Her new body of work, created during her residency there, reveals a renewed exploration into landscape. By working directly from photographs, found mostly on social media, the artist offers us glimpses into other people’s worlds. . Maria teaches art in the Midlands Prison Education Centre in Portlaoise.

Cecilia Danell is a Swedish artist based in Galway since 2004. She has exhibited widely in Ireland as well as internationally. Her work investigates our psychological relationship with landscape and place and how this shapes and defines us, by exploring her own Scandinavian heritage while also drawing inspiration from analytical psychology and existentialism. She spent February-March of this year on residency at the Nordic Artists’ Centre Dale, Norway, funded by the Norwegian Ministry of Culture.

“Momentary glimpses of a passing Laois landscape. A place where light and dark converge with speed to create split second distorted images of movement”, says Edward Whyte in relation to this work in exhibition.

Feeling very rooted in the landscape: the anatomy and geography of “place”, textures, colour and form, layered emotional landscapes within rural geographical ones. Emily enjoys pushing it beyond its traditional expression.

Paul McCloskey was born in Carrickmacross and now lives and works in Gorey. ‘The Omega (awakenings 3d)’ is a third in his trilogy of the awakenings theme. The viewer is given a full 360 degree view of the works, inspired by the landscape, what we perceive as everyday and perhaps ordinary, the places we merely glance at without allowing ourselves to get lost in the breathtaking creation and beauty that surrounds us. The cubes question and challenge the staple of painting being confined to the two dimensional surface and suggest the dichotomy of spirit, being all things in all directions at once.