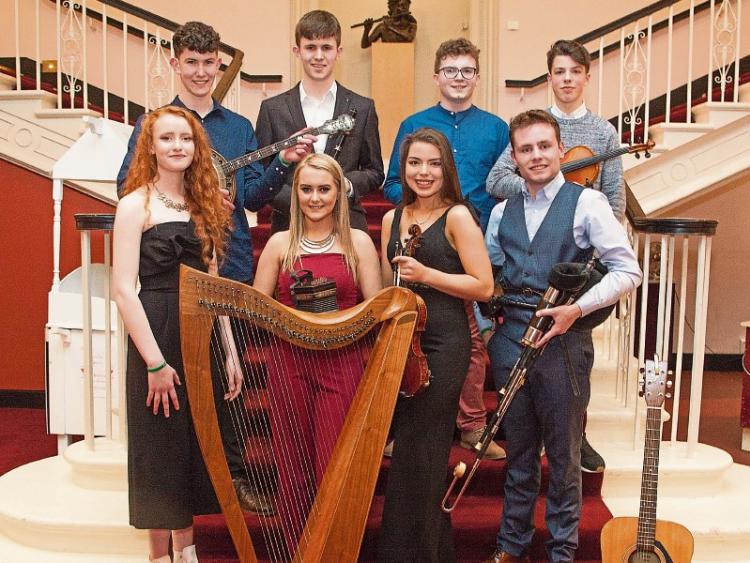 It was a 'piece of cake' for Laois trad music group Fiúntas, who have scooped second place in the Siansa Gael LinnAll Ireland final.

Two out of eight national finalists were Laois groups, proving the traditional musical talent in the county.

Before they took to the stage at the National Concert Hall last Sunday night April 2, broadcast live on Radió na Gaeltachta, Fiúntas and the other Laois group Lonrach, shared a cake presented by Áine McGeeney of Goitse, to ensure that no competitive rivalry would alter their musical friendships.

Fiúntas is made up of Laois musicians David and Mark Vesey, Dara Clooney, Lily and Naoise Kettle from Spink Comhaltas, and Caoimhe Lowry, Molly Donnery and Conor Thompson from Camross Comhaltas.

Lonrach are Conal Nevin, David, Maeve and Ellen Scott, Peter Bennett and Fiadh Fitzpatrick along with two more from Cork.

The competition is an annual highlight for musicians under age 19, launching many professional careers, with over 60 entries this year.

A full audience of schoolmates, friends and relatives, were treated to a feast of traditional music and song.

Also playing for the €4,500 prizefund was ‘Sáile’ from Sligo, ‘Ragairne’ from south County Dublin, ‘Tigh Tara’, from County Derry, ‘Imreasc’ from Limerick, ‘Leoithne’ from County Cork, and County Clare’s ‘Dúchas’.

They praised all the groups for their carefully selected and arranged tunes and songs, and declared Clare group, ‘Dúchas’ the winners of the top prize of €2,500 and the Gael Linn Trophy.

Third place and €750 went to ‘Leoithne’. A memento was presented to each young musician who took part.

Presenter Áine Hensey, RTÉ Radió na Gaeltachta, remarked on the many groups built from Comhaltas members and the fact that Laois was the only county with two finalists, congratulating the county board for bringing a bus of supporters, backed by Conway Scaffolding.

Fiúntas had made it to the final last year, but it was the first one for Lonrach, coached by Music Generation's Siobhán Buckley, and made up of Comhaltas members from Spink, Camross and Portarlington.

Two other groups drawn from Ratheniska, Portlaoise and Mountmellick were eliminated in the semi finals but had come along for support.